Only One Golos Deck Made it to the Top 8!? 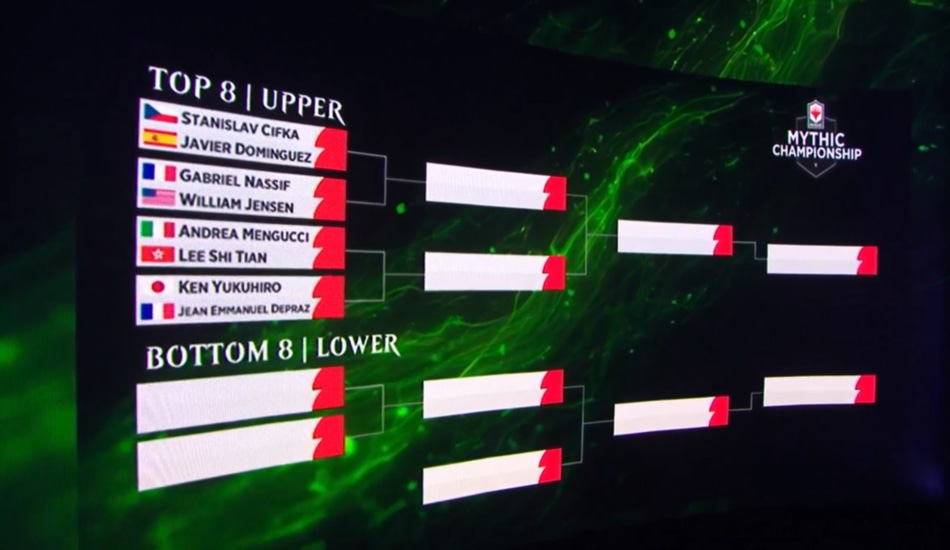 In a tournament dominated by Golos, only Jean Emmanuel Deprez managed to make it into the top eight playing the deck. Quite frankly, this a rather stunning turn of events. First off however, I think Wizards did a really good job with the coverage this event (Other than the same "commercials" running every single set of breaks). They usually avoided showing the grindy Golos mirror matches as the featured match for Twitch, and that will continue into today as this top eight is looking much more exciting than I think they imagined in even their most optimistic projections.

Their are technically 6 different archetypes represented, as shown below:

With the only true mirror match happening in round 1, you can expect some extremely varied gameplay throughout the top 8. While all the Bant/Simic decks do play pretty similarly, there are some real wildcards that made it in. Notable, Javier Dominguez was the only Gruul player to make it to day 2, and he squeaked by on tie breakers yet again to make it as the eight seed. Also, Li Shee Tian, the only Mono Red player in the entire tournament, rattled off four straight wins against Golos after getting off to a 1-2 start to make it. And of course the player everyone is talking about, Ken Yukihiro, looked great yesterday, and gets probably his best matchup in round 1 against Depraz.

Stanlislav Cifka is proving that the Czechs can talk the talk and walk the walk. He has to be the favorite heading into today, after proving time and time again over the last year or two that his deckbuilding is unmatched, and that he has play skills to back it up. While the other two members of the Czech squad did not have as great of a day yesterday, Cifka is now 10-2 in the tournament, and has an extremely strong matchup in round 1. There is also a blossoming rivalry between the American testing house of Brad Nelson and Brian Bruan Duin and the Czechs, with the two throwing some blows on twitter over the weekend. I absolutely LOVE this, and I think a respectful feud is great for the game. Both groups of players are very opinionated on podcasts/social media, and when their opinions clash as they did this weekend, it adds to the intensity. If Cifka wins in round 1, he will go up against one of the Simic Food decks, with both players on Brad Nelsons testing team, and that should be a great matchup.

Additionally, in my opinion the most intense feature match yesteday was Andrea Mangucci vs Cifka, in a battle of the young Magic hotshots. You could tell from the face cams that these players felt they had something a little extra to prove against each other, and when Mangucci came out on top you could tell Cifka was yearning for the rematch. These players are on opposite sides of the bracket today, and could meet in the finals for would be an incredible finish  to a great weekend.

The other major storyline out of yesterday is what Wizards is going to do with B&R announcement. Before the tournament, it seemed a foregone conclusion that Field of the Dead was done for, but the extreme underperformance of the deck could shake things up. For this first time this morning, you are seeing people talking about banning Nissa to subdue the power of the Green/Blue strategies, AS WELL as Oko. If I had to guess, I would say that Wizards is probably scrambling right now. I dont think they ever expected the results to go this way, and it wouldn't surprise me if they are in discussions this morning about changing their previous plan. Lets hope they don't overreact and make a rash decision, but if only Field of the Dead was banned these blue/green strategies would be running rampant on the ladder.

If I had to make a bracket, this would be it: