From November 5 to 8, Magic Arena will be offering the Crafter’s Challenge event for the first time. The event will cost 2000 gems per entry, and will give access to all cards in standard. Players will play until their 7th win or 3rd loss and the prize structure is described below. 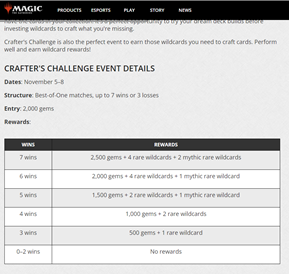 The expected value (EV) for this event is somewhat tricky to examine, but also provides some insight on how much WotC currently values their Wild Cards (WCs). As you know, WCs are the most premium resource for constructed in the game, as a player can exchange a WC for any card of the corresponding rarity. For simplicity, we will not be making a distinction between rare and mythic WCs and will be assuming that they have similar value. Frank Karsten made this same reasonable assumption in this article from 2019 while valuating WCs and it will be interesting to compare his valuation with this event.

We examine the EV for a player with a 50% win rate below.

As shown on the table, a player with a 50% win rate can expect to lose 1347 gems per run on average playing this event, while also earning about 1.45 WCs on average. If we ignore the time and enjoyment factors associated with playing the event, then we can think about this as the player “buying” WCs at a cost of 1347 gems per 1.45 WCs on average, which comes down to about 930 gems per WC. That is, a player with a 50% win rate who commits to playing this event a large number of times can expect to accumulate one WC for every 930 gems they lose. Correspondingly, from WotC’s perspective, we can roughly estimate that they will earn about 930 gems for every 1 WC they reward, which we can see as them “selling” WCs at a rate of 930 gems per piece. Back in 2019, Frank Karsten valued a rare/mythic WC at 2472 gold, which converted to gems is only 494 gems. This shows that WotC actually values their WCs much higher. If they were to sell WCs, we can expect that the average cost (between rare and mythic WCs) computed at 20,000 gems is to $100 would be at least $4.65 per WC or $3.28 per WC based on the valuation of 750 gems for $4.99.

How good should you be to enter the event?

The answer to this question depends on how much you want to pay for WCs. The following table provides some details in relation to this.

As shown from the table, a player who has a 77.44% win rate or better will essentially be able to farm the event for WCs, spending zero gems on average (and even making some gems instead) while raking in 4.7 WCs on average per run.

Of course, these win rates are relative to the player base who will actually be playing at the events. A player’s win rate in the Play Queue is typically considerably different from their win rate in the ranked queue, or at tournament events. Thus, it is important to consider the characteristics of the player base who will be attracted to enter the event. An important consideration here is the All-Access factor. Players who already have a largely complete collection, and who are capable of completing collections via draft, already generate a considerable number of incidental WCs and can have a large cache of WCs at their disposal. Such players have little use for the All-Access aspect of the event since they already have all the cards for the decks they want, and so they may be less incentivized to play this event. I belong to this group and I know that I will not be playing this event, simply because the rewards are not good enough. I can confidently peg my constructed win rate at around 60%, but this means that I will still pay 360 gems per WC on average. During my MID draft run, I ended up paying 0 gems for 15 drafts and got 56% of the rares in the set while also getting a number of WCs from opening prize packs. As such, the Crafter’s Challenge event does not appeal to me at all.

Conversely, there are players who may have much smaller collections and are not able to currently build the decks they want to play. For these players, the Crafter’s Challenge’s All-Access component may be valuable, and so they may be more incentivized to play. To some extent, we can reasonably assume that players who have larger collections also tend to have stronger play skill (assuming they used such play skill to accumulate their collection). This would imply that the level of competition one can expect in the Crafter’s Challenge will tend to be on the lower side. However, one issue with making this conjecture is that there is, theoretically, some subsets of players with very small collections but very high play skill. For example, for a player who is very skilled in paper/MTGO, the Crafter’s Challenge can provide an opportunity to jumpstart their MTGA collection at the expense of the rest of the players entering the event. Still, I think it is unlikely that there will be a lot of these players taking advantage of this opportunity.

Overall, while I personally do not find the Crafter’s Challenge appealing, I do understand the value of an event where everyone will be on equal footing with respect to card access. More importantly, the prize structure of this event allows us to have a glimpse of just how much value WotC is associating with their WCs. Finally, I am excited by WotC’s exploration of new prize structures, and hope that this is a step towards more frequent or even always available in-client money events. That is, if this event paid in the cash equivalent of WCs instead of WCs themselves, I would certainly be more interested in playing.

May the shuffler be with you.