Best Reserve List Cards You Can Buy For $10 Or Less 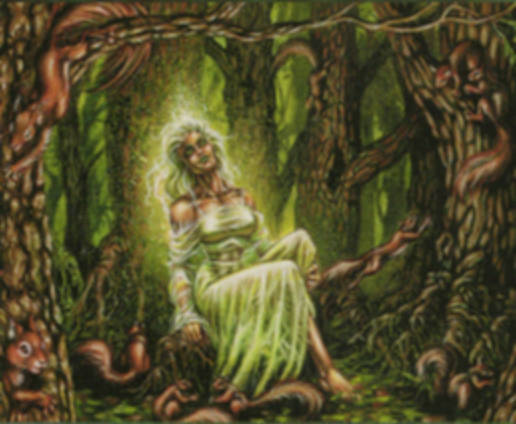 There has always been controversy around the reserved list. None more recent than Wizards of the Coast printing non-legal versions of reserved list cards in their 30th-anniversary collector products. Love it or hate it, and politics aside, there are some awesome cards that grace the list.

From the original dual lands and the "Power Nine" to lesser-known gems and downright bad cards, the reserved list has it all. Today we take a look at 10 unique, powerful, reserved list cards that you can get for $10 or less. 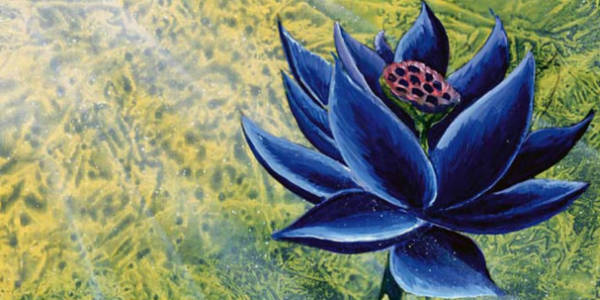 Prices are on a decline right now, so many of these cards were over the $10 mark some time ago. That said, not only are these cards cool but if you pick them up now and hold onto them, they'll likely go up in the future. Ok, let's get into the cards themselves. 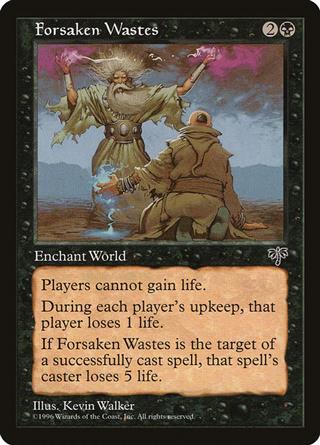 We've all played against people gaining a ton of life. As someone who plays Karlov of the Ghost Council

, I am speaking about myself here. This card is capable of stalling out whole strategies if it stays on the field. Next, it damages each player (including you) at the beginning of their turn. So, negates gaining life and deals damage. This is a combination that quite a few commanders would be quite fond of. Mogis, God of Slaughter

are the first that come to mind.

Lastly, while it won't keep this thing on the battlefield for long, when a salty opponent does remove it they'll lose five life for their effort. If you like dealing damage, preventing the gaining of life, and like playing lesser-known cards, this one is for you. 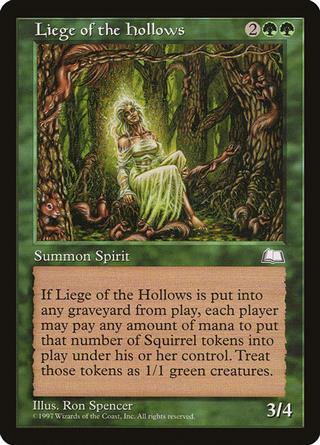 Since Modern Horizons 2, Squirrel Tribal has become a fringe but beloved archetype in Commander and that made Liege of the Hollows interesting out of nowhere. When it dies, every player may pay any amount of mana and get that many 1/1 Squirrel tokens. At four mana, and considering you need a way to make sure it goes to the graveyard, this symmetrical effect may not seem too strong. 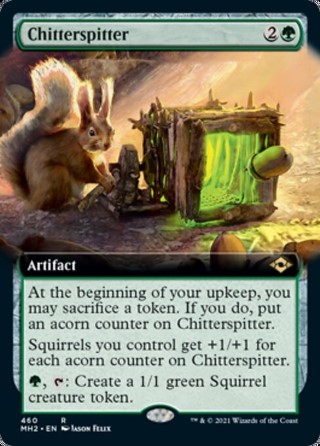 However, when played alongside Chatterfang, Squirrel General

and the Liege gets a lot less "fair". Strength aside this type of "whole table interaction" is quite fun and I think most players would enjoy it - Even if they do end up getting overrun by a scurry of Squirrels. Just don't get this thing removed while you're tapped out.

Lastly, I want to mention that the art on the card (done by Ron Spencer) is phenomenal. 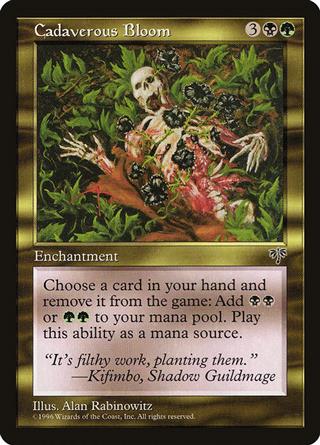 for example, enabled many degenerate combos to achieve their goals a turn faster and allowed players to cast a turn two Blood Moon

or a turn one Chalice of the Void

before being banned from Modern. So, why doesn't the Bloom see any play?

My guess is because mana acceleration that comes so late in the game (this thing is five CMC) isn't nearly as good. At that point in the game, pitching cards from your hand is not nearly as worth it. That said, the card is beloved by many people who enjoy buying reserved cards. If you're one such person, the price has dropped nearly 50% over the last few months, so now is a good time to buy.

If you can think of a way to break this card in Commander, comment down below and tell me how.

You May Also Like: 8 MTG Cards To Buy Right Now At Low Prices 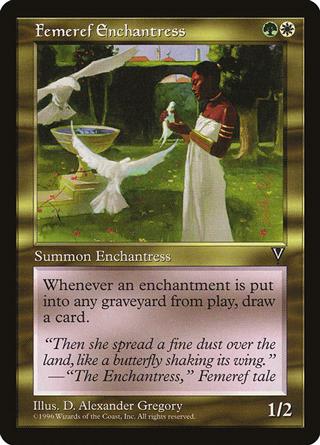 Enchantment-based strategies are popular and often powerful in Commander. An "Enchantress Effect" is a term that refers to creatures that let you draw a card whenever you cast an enchantment. They are fairly common and some examples include Mesa Enchantress

. All of these see quite a lot of play. 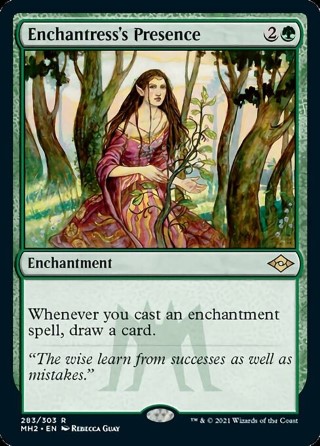 is slept on by most people, despite having an equally valuable effect. It gives you that enchantress effect whenever your (or anyone else's) enchantments leave the battlefield as well. If drawing one card per enchantment is good, drawing two per enchantment is certainly better.

Not to mention, you'll be getting to draw when those opposing Rhystic Study

Liege sees play in Commander (as a commander and in the 99) and I'm always happy to see it come up in a game BUT at the same time very said. Why? Because this thing usually comes into play as at least a 12/12. I have seen it come in as large as a 23/23 at times. Now, there are other high power/toughness threats in the format as well. For example, compare this to Serra Avatar

So, what puts this higher in my book? The fact that it has built-in protection in the form of basically Hexproof. This makes it an often huge beater that is quite hard to get rid of. As mentioned, Multani can be your commander if you'd like. However, I think he's at his most potent when he's in the 99 of Simic commanders such as Tishana, Voice of Thunder

, or Kruphix, God of Horizons 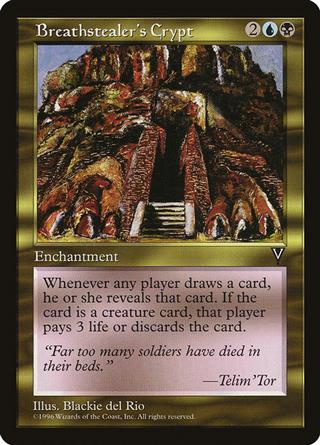 Everyone likes drawing cards - Until you play Breathstealer's Crypt

. Then, drawing cards is painful. Having to pay three life for every creature card you draw adds up very quickly. Furthermore, players must reveal each card they draw as well. So even when this misses, there is a ton of information being revealed. 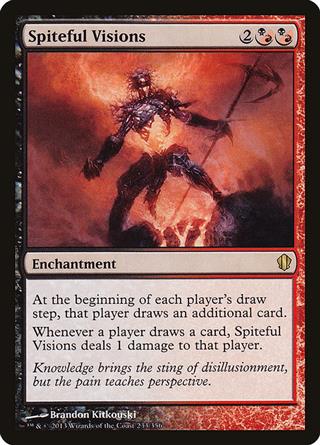 I could think of a few commanders that you could slot this into if you wanted to bring some RL spice to your next games. Some of my top choices are Nekusar, the Mindrazer

. If you play this, you'll probably want to build your deck accordingly. 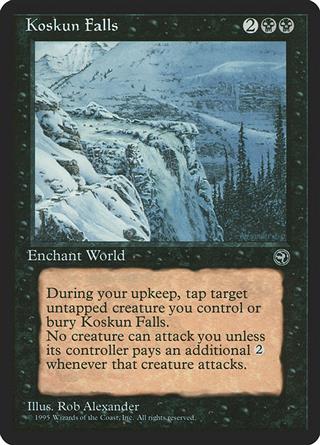 Coming from what many consider to be Magic's worst set, this is not a card that you'll be able to have success with in any deck. It gives black a version of Propaganda

which would be very good. The reason it's nigh on unplayable in most decks is the downside tacked onto the card. During your upkeep, you're forced to tap an untapped creature you control or destroy the card.

So, what is the exception? When you want to be tapping down your creatures, of course. A good example would be King Macar, the Gold-Cursed

. This is a more fringe one as far as gameplay goes, but hey, as I said, the reserved list has plenty of "bad" cards. They're still a look back into MTG's past. And the art here is stellar. 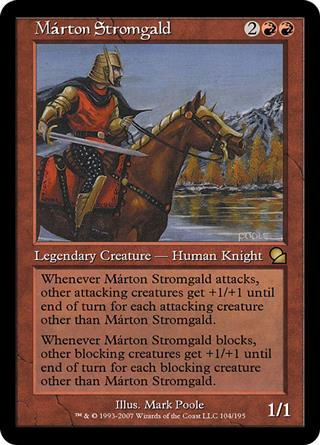 This Legend from Ice Age can make for a powerful anthem in go-wide strategies. While he can be your commander, he usually sees play as a creature under commanders like Adriana, Captain of the Guard

and Wulfgar of Icewind Dale

where his attack trigger can be taken full advantage of. 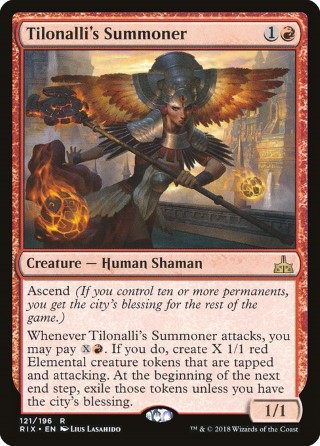 His ability isn't exactly unheard of as far as attacking creatures go but as far as I know the blocking portion he brings to the table is pretty unique. Having the boost available on offense and defense is pretty cool. So, the next time you're brewing up a deck with a horde of Goblin attackers, perhaps consider this lesser know creature as a general. 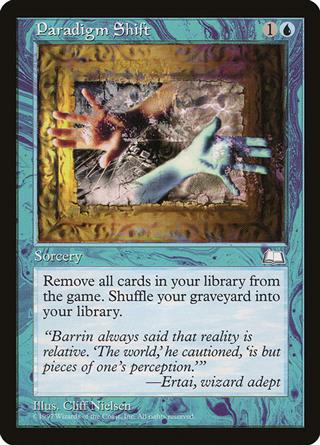 is played as a win-con in a lot of decks. Assuming that you don't have any cards in your graveyard, it will exile your entire library and you can win the game via Labratory Maniac, Jace, Wielder of Mysteries

. There are other cards that can help get you to an empty library as well (Demonic Consultation, Levler, and Ad Nauseam

), in a singleton format, the redundancy is a huge asset. 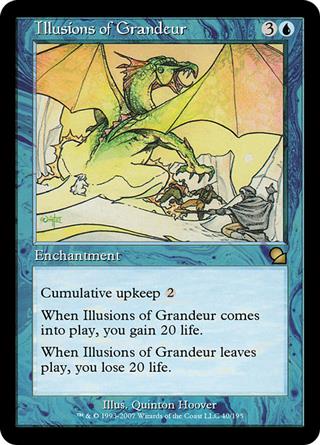 This one has a really cool design. The term "Illusions of Grandeur" is reflected perfectly on the card. When it enters play, you get the awesome upside of gaining 20 life. However, this upside is only a reality for as long as you can continue to pay for it. Once you can't, you lose everything you gained. The flavor here gets an A+.

What makes the card not only playable but good, is playing it, gaining the life, and then giving it away to some unfortunate opponent. Once you do it becomes their burden to pay the upkeep cost on it. Not only does this tie up their mana each turn, but when they can't pay it anymore, they lose 20 life. 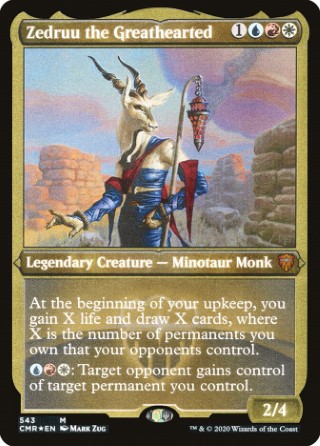 . Having built this deck myself, I can say that Illusions of Grandeur is one of the best things you can be giving away. What's more, you'll get to gain a life and draw a card afterward too.

There you have it, 10 of the very best reserve list cards that can be yours for $10 or less right now. These old cards are highly collectible and have an awesome nostalgic feel to them, regardless of how playable they are. So, anytime I can find one that people are actually sleeving up and putting into decks, I buy them. That said, I hope you've enjoyed taking a look at what I have on my radar at the moment. And seriously, if you can break Cadaverous Bloom

, I would love to hear how.