First of all, congratulations to PVDDR for winning an epic world championship tournament. He is a true champion in every sense of the word, a great ambassador for the game and a true fan favorite. I am extremely happy for him and his family, as he finally accomplished the one thing that was eluding him his entire Magic career, and cements his legacy in the greatest of all time discussion. He gets to take home $300,000, gets his face on a card, and maybe most important to him gets the title of World Champion to his name! This caps off a really strong season from the hall of famer, and will go down as the biggest moment of his long and storied career! 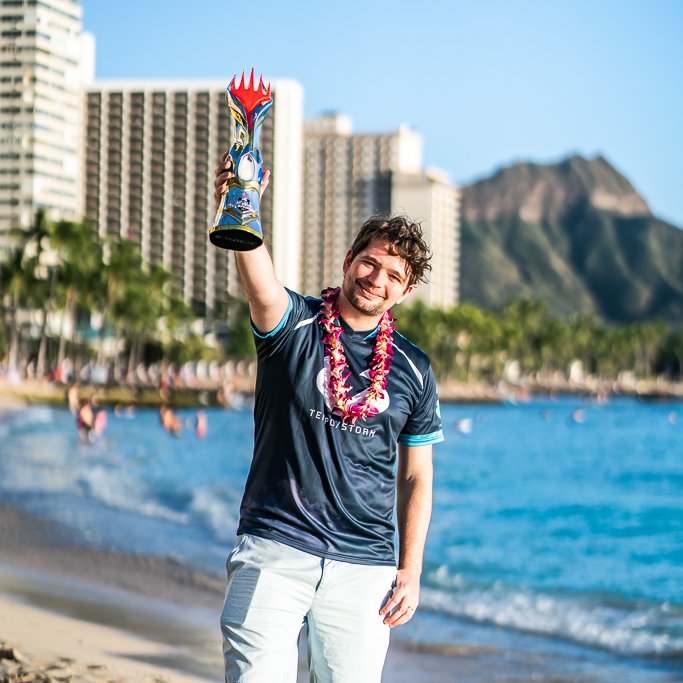 Take nothing away from PVDDR, he played an unbelievable tournament and battled through some very tight matches to get the trophy. However, the top 4 has to go down in history as one of the most ridiculous formats I have ever seen at a high-level competition.

This Magic Worlds was interesting. The quality of the matches was terrific all weekend long. The casters did an excellent job explaining the action to everyone and amplifying the moments to match the occasion. I loved the live studio audience for the top 4. However, the tournament can not be viewed in an entirely positive light due to some incredibly head scratching decisions by Wizards. There was controversy right from the very start, when Andrea Mengucci was given a game loss for a small mistake, potentially costing him the tournament. By getting two losses in draft, a player had less than a 1% chance of going on the win the whole tournament, so when crunching the numbers Mengucci's registration error put him in a ridiculously unfair position. Of course he did go on to lose 3 of his 4 next matches, so I'm not saying that the penalty was the sole reason he was eliminated, but it did reduce his chances more than I would deem to be reasonable. It seemed like an honest mistake and one that was reported right away. With the stakes of draft being so high, I wouldn't have given him a game penalty.

There were of course other complaints about the format. This can really be summed up in one stat, Marcio Carvalho played 3 matches of standard to advance to the top 4, while Gabriel Nassif played 11. He did wrack up a few losses however, and overall I have less of an issue with this as I do with the top 4 format.

This tournament was the biggest in Magic history. When the stakes are this high, the tournaments goal should be solely about determining who is the best player, and who brought the best deck. For me, this should be done by creating a format that promotes the least amount of natural variance possible. For some reason, Wizards decided that the first match of the day, the original Carvalho vs Da Rosa battle, should be just one best of three match, while every other match was best of three matches. The only scenario I can come up with where this makes sense is if they were concerned about the total time of the tournament. However, when you are playing for $300,000, that is incredibly disrespectful to the players in my opinion. Not only was that the match with the highest potential variance in the entire top 4, it gave an absurd advantage to the winner in the grand final.

I understand the concept that winning your match in the winners bracket should carry some advantage with it. However, is a bye straight into the finals not advantage enough? For the loser of that match, again, the match that carried the highest potential variance, to have to win a play in game AND win 3-1 in matches in the grand finals is ridiculous! That put Carvalho, who was 5-0 before the top 4, in a position where he needed to go no worse than 5-2 in matches to win the championship. That also meant PVDDR only had to go 2-2 in matches to win the championship, which was the result that ended up occurring. If the man can lose in his first top 4 game and claw his way back to the finals, give the man a fair shot! That match against a scorching hot Seth Manfield was not easy for Carvalho, and he shouldn't have had the double obstacle of needing to beat PVDDR 3 times. If you want to make the championship game best of 5 matches I am fine with that, but at least each player should have an even shot. This was like if the team who had a better record in the regular season started the superbowl with a 14-0 lead. Carvalho almost pulled the comeback and took a 2-1 match lead, and I can't imagine what is going through his head this morning.

Despite these criticisms however, the matches were absolutely unbelievable yesterday, and as a result the tournament was still a blast to watch. As Maria Batholdi said, "you paid for the whole seat but you only needed the edge."

I am super excited for the 2020 season of competitive Magic, and optimistic about next years Worlds being even bigger than this years. Lets just hope Wizards can come up with a format that is more fair to all players!

Gapollard1 22 Feb 2020 11:45
@ETBR The format was known a little before worlds, but it seems it wasn't conmunicated to the players incredibly well. On day 2, Seth Manfield posted on twitter he didn't know the bottom half was best of three matches untill right before he played in it!
infinite 19 Feb 2020 07:07
WHY SETH WHY?!?
m1618 18 Feb 2020 10:16
Worlds event felt very unbalanced and consequenly led to a random outcome. The draft piece was a joke. Arguably the best players were eliminated out of nowhere. Then the top 4 advantages for paolo. Suddenly all the media telling us how good paolo is to sell the results. So cheap. Im glad for the 100k views in twitch though. Long live this magic game!
EtBr1978 18 Feb 2020 07:12
Very interessting read. Was the format known before? Because your write up gives me the impression they just made it up on the fly with whatever reasoning behind it.
BeckysFootSlave 18 Feb 2020 05:10
@Gapollard1 = Best article!!!
On one hand I would say no one deserved it more than PVDDR, but on the other Hand your article makes people think about it!
I say: You're completly right and the "way" of this tournament IS MORE than questionable!!!