So this is how I go: shivering and alone. Stuck on some forsaken mountain I foolishly thought I could conquer. After what must be hours of trudging through whiteout conditions, I can feel myself growing sleepy. The kind of exhaustion where the cold itself has crept into your bones and beckons you to close your eyes. The final, frozen sleep. The reason so many skeletons lie buried under countless winters. As I fall to my knees, unable to go a step further, I realize it's my time to join those bones. My muscles refuse to function.

I close my eyes, seeking any form of serenity in the face of mortality, and am shocked to discover a flicker of warmth. The last wisp of life's flame? Wait, no, something else. There's a presence here beside me. I open my eyes just long enough to see the shaggy coats and concerned faces. I feel a tug on my cloak. I'm being pulled backwards, down the mountain. Back to home. My mind is foggy, but in a sacred instant, I become aware that everything will now be okay.

And the only thanks I've the strength to muster is "Good boys". 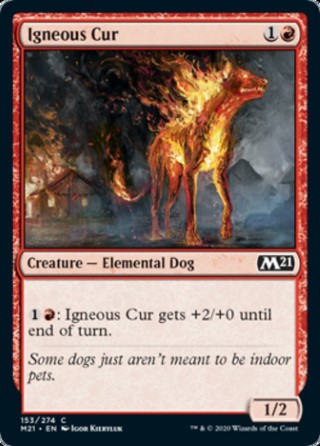 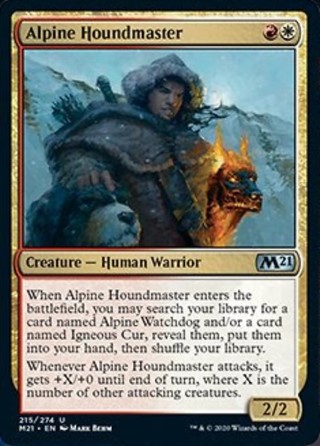 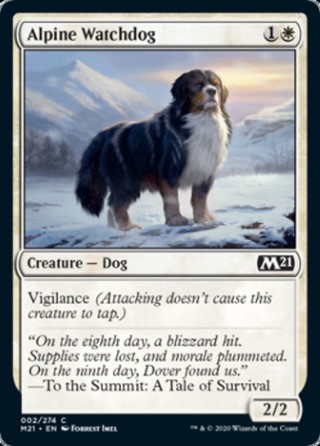 We're all accustomed to the idea of top tier decks ignoring the more "fun" trappings of the game in favor of ruthless efficiency. Cute tribal builds are primarily seen as an outlet for casual and EDH players. It's not that such tribes are purposely underpowered, but rather the elements that make up an effective deck often stem from a variety of sources outside a single tribe. There needs to be enough tribal synergy, mana curve candidates, and supporting spells to allow a deck to function beyond the capacity of simply "play lots of creature type _____". 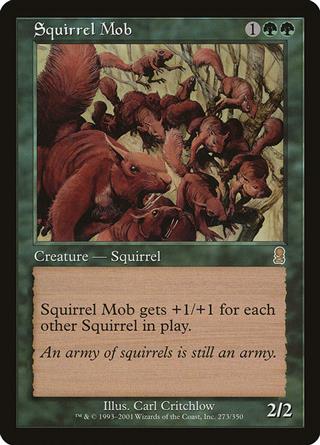 This guy wasn't exactly tearing up Standard tables back in Odyssey

That said, lightning-in-a-bottle moments do occur. There are few things more exciting than the discovery of a jank-deck with enough supporting pieces to perform alongside its brethren in the top tier of a format. For me, Boros "Good Boys" fit this bill, not only earning me Mythic for the first time in my Arena career, but also allowing me to do so in my favorite color combo! 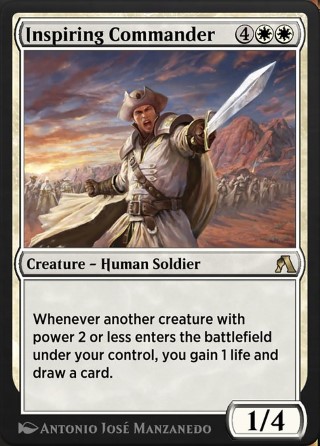 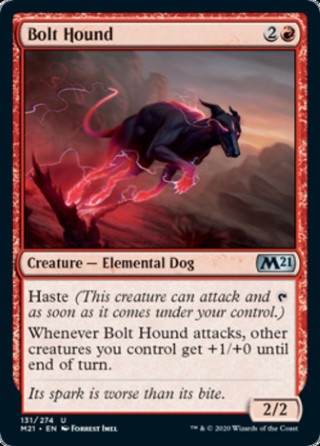 The effectiveness of this build comes down to a shifting game plan. Early on, dog tribal is all about Aggro, backed up by Lords Pack Leader

. Yes, Dog Tribal actually has two Lords in Standard. Starting to feel like Merfolk, right!? Well okay, no. But a man can dream. 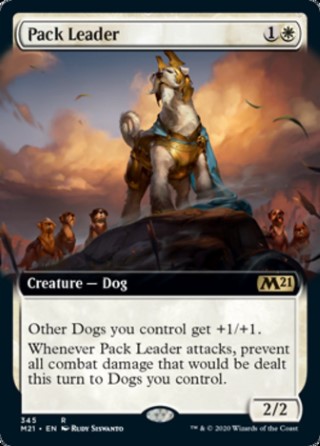 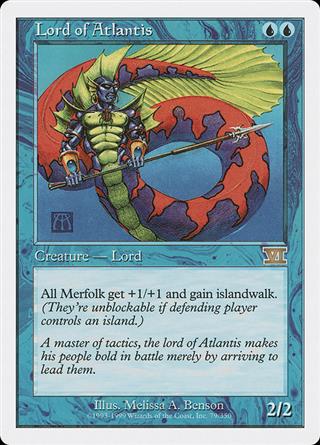 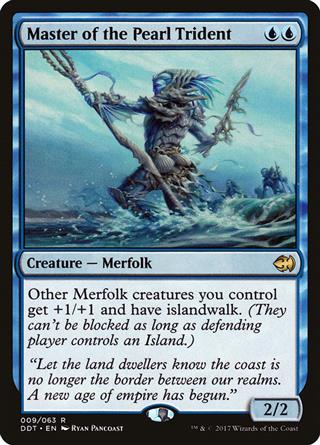 Anyhow, while your opponent deals with an early aggressive onslaught from your puppers, you are secretly preparing your dog army to take full advantage Winota, Joiner of Forces

. Once she arrives at the party, the deck switches to a more midrange-vibe, essentially transforming into a value engine that helps your team push through damage while keeping your hand (and hopefully life total) filled.

Let's explore, shall we?

1.) At the start of the game "Good Boys" functions as a pure Aggro deck, so you'll typically want to play first when able.

2.) This is a BO1 build, so no sideboard included. If I were to try this deck out in B03, my side board would include a few more answers-type cards such as Banishing Light

to remove problematic permanents. On the other side of the coin, I'd also pack more aggressive creatures to fully take advantage of control decks with slow starts. Think Akoum Hellhound

3.) Even though the deck can "go off" via Winota, Joiner of Forces

flipping expensive humans into play, occasionally pure canine beat-down is enough to win the game on its own. Tempting as it is to drop Winota, Joiner of Forces

with a team full of dogs, if an additional Pack Leader

in hand is enough to close things out, do not hesitate.

4.) Aggro fears slow starts and running out of gas. Traditional wisdom states you have turns one-through-three to establish a lethal force. If you're unable to do so, your opponent is likely to wrestle the game away from you. One of the factors that makes Boros "Good Boys" successful how it actually has a decent amount of card advantage baked in. 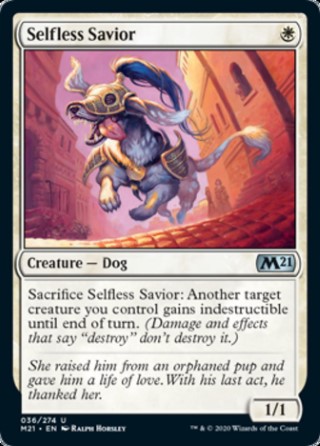 is the name of the game on your first turn. This pooch is pivotal for a variety of reasons, as it not only gets the beat down train going when followed up by Pack Leader

, but protects more valuable creatures later on for zero mana. I cannot tell you how many times I've had opponents try to shoot down a Winota, Joiner of Forces

, completely forgetting that I had a Selfless Savior

on the battlefield to take the bullet. Saving a key value-creature can really lock in a game, so don't underestimate it.

Turns 2 and 3: These are the pivotal turns that center on crafting the army that'll both lay the beat down and set up the foundation for an explosive midgame. Your main doggy foot soldiers are comprised of Alpine Watchdog

. Aim to drop these on turn two with a follow-up Pack Leader

on Turn Three, unless you can land a Selfless Savior

on turn one. In which case, Pack Leader

it up on Turn 2. As the game drags on, the ability of Igneous Cur

to pump itself becomes all the more valuable, letting you pour excess mana into damage.

are effectively your deck's Lords, allowing dogs to hit for more explosive damage. The added value of Pack Leader

cannot be underestimated, as not only does it provide a pump effect, but grants your dogs immunity to combat damage so long as Pack Leader

, itself, can join the fray. This lets you continuously apply pressure to your opponent, who will no longer be able to make trades with your doggies. Even  more importantly, it also allows your dogs to attack with impunity after you drop Winota, Joiner of Forces

acts as part-tutor, part beat-down machine. If your opening hand appears more suited to doggy beat down (with the likes of Pack Leader

), I recommend you lead with the poochies. If not, Alpine Houndmaster

fetching two additional dogs is a wonderful consolation prize. Because the deck can easily go wide with large swaths of attackers, the power of Alpine Houndmaster

can become very large, very fast. It gets even crazier once Winona hits the table and multiple creatures are cheated into play. 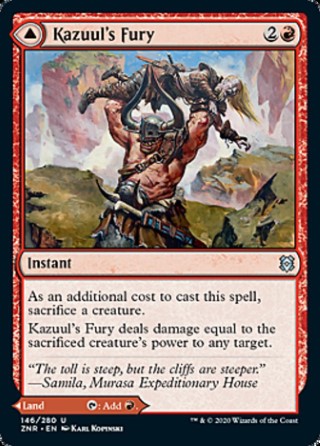 is one of the primary reasons this deck hides a spicy piece of secret tech: Kazuul's Fury

will be attacking with an elevated power boost and is thus likely to be blocked. In these moments, a timely Kazuul's Fury

will send 5+ damage straight to an opponent's face.

Thought not a true 'Lord' itself, the speedy Bolt Hound

can also bring a lot of hurt to the table. It's hasty nature makes it explosive with whatever team of attackers you've established early, and in the  later game, turns a team of soldier tokens off of a Reverent Hoplite

into quite the dangerous force. 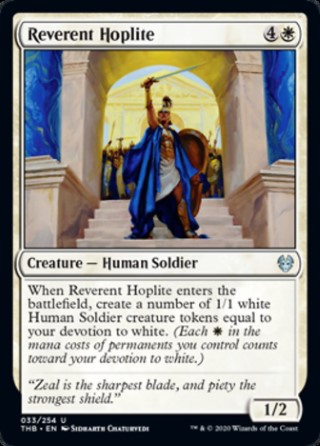 Turn 4 and Beyond: Depending on your opponent, the mid-game is all about playing additional dogs alongside Pack Leader

and continuing to apply pressure, or shifting to the "go off" plan. If your foe has begun to stabilize, Winota, Joiner of Forces

becomes your key strategy. At this point, you ideally have two or three dogs ready to attack. If one of them happens to be Pack Leader

, you can sit comfortable knowing that, unless opposing removal comes up, your dogs will live to attack another day. And thusly, activate more Winota triggers. Your deck is primarily looking to flip over Inspiring Commander

, a more expensive trooper than an aggressive deck would typically seek out. But when 'cheated' into play via Winota, and combined with a multitude of inexpensive creatures, Inspiring Commander

generates a game-winning amount of card advantage. And life, to boot. The dream-play is flipping Inspiring Commander

, who will proceed to provide you with a 1 life and a card for every soldier it makes. And itself. Because you spent the first couple turns building up an army, you likely have a Devotion to White of at least 3-4, netting both ample life and cards.

Even if you only hit Reverent Hoplite

are enough to make an army of tokens very dangerous. Hit another Winota, Joiner of Forces

or Apline Houndmaster, and you're still in pretty good shape. A Winota reveal  essentially grants her Haste and Indestructible for the turn. Alpine Houndmaster

may not receive it's built-in combat bonus, as it's put directly into play attacking, but it'll still fetch you two more dogs to trigger with Winota, Joiner of Forces 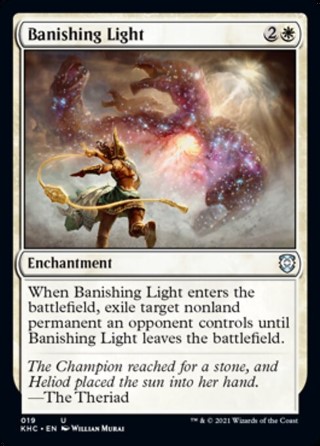 to deal with problematic permanents, be they pesky blockers or expensive planeswalkers an opponent survived long enough to cast. If your foe is able to catch up,the aforementioned Kazuul's Fury

provides key reach, even when not boosted off the back of an Alpine Houndmaster

, and at the very low opportunity cost of a being a 'tapped land' at worst.

Boros "Good Boys" is a ton of fun to play, delivering ample damage in the the early game and explosive bursts of life and card advantage in the mid-to-late. Both scenarios are likely to put a big grin on your face. And that's before you even consider that you did all that with a pack of happy puppers, tails wagging all the while.

I hope you've enjoyed reading! Thanks for your time, and please feel free to leave comments/questions below. I want to give a shout-out to SaffronOlive, who's 'Meme or Dream' series inspired me to shoot for Mythic with doggos.

And WoTC, could you seriously print Inspiring Commander

in paper, already?! There's so many Commander decks this guy would shine in! It's literally right in the name!