Heavy Favorites Getting Eliminated Dominate the Headlines at Worlds Day 1

Aloha Magic Fans! Yesterday marked the beginning of the largest event of the Magic Calendar, and the highest stakes tournament in Magic history! 16 elite competitors travelled to Hawaii to share a $1 million prize pool, and the action yesterday did not disappoint. First off, Wizards really took the broadcast to the next level. Check out this set! 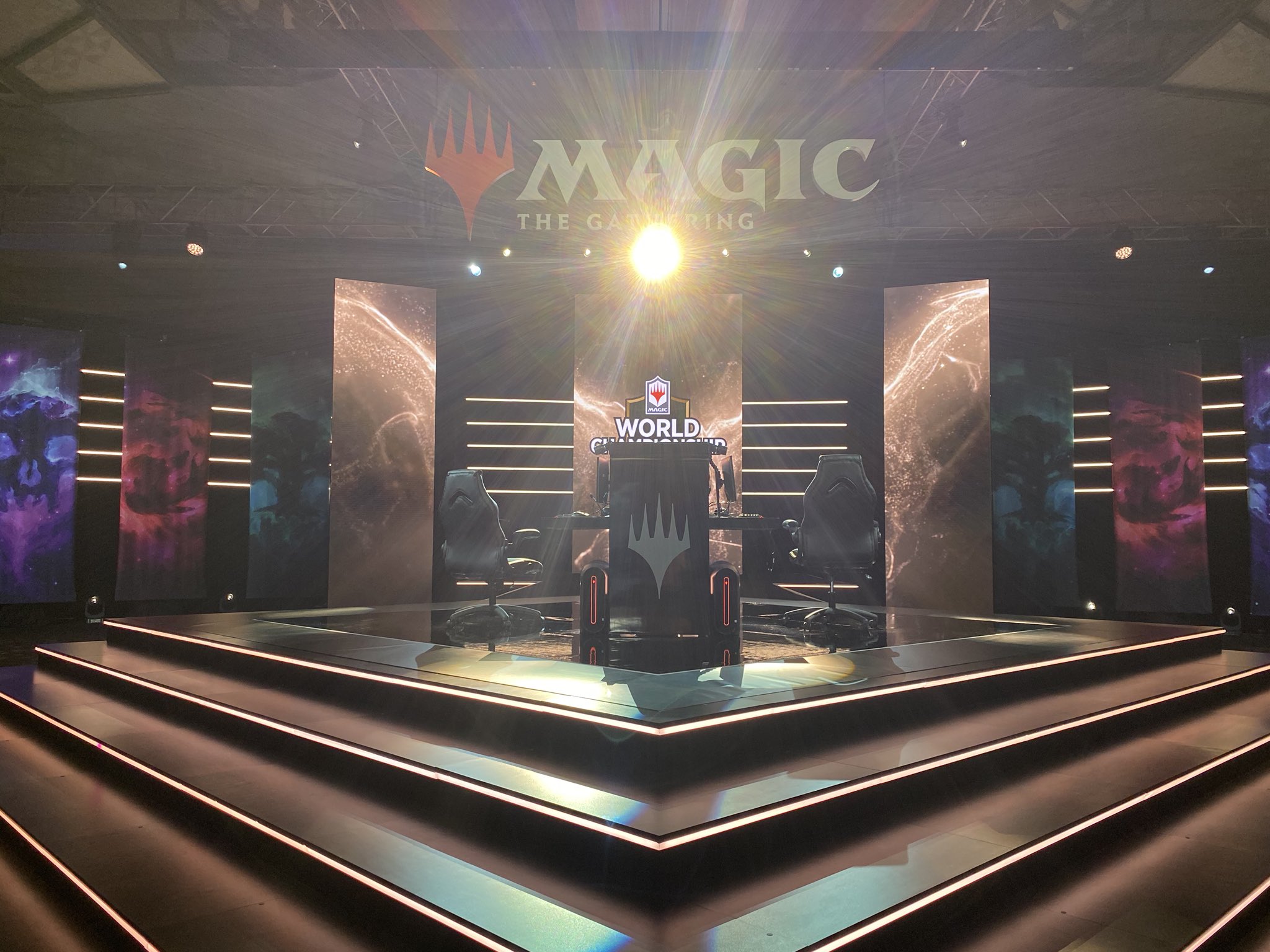 The broadcast crew remained similar to what it has been for the Arena Mythic Championships, and as always all the casters did a great job.

The first event of the tournament was a draft, being billed as the highest stakes limited event in Magic History. The actual draft was held on Thursday night, which allowed coverage the next day to be fantastic. Marshall and Paul in the booth broadcasted a trimmed version of the draft with cut away interviews to players when they drew a bomb card, and immediate breakdowns of all players colors in between packs. This broadcast really set the tone for how draft should be covered going forward in the future, and it will be hard to go back to watching a live draft after watching this production.

All of that positive production was overshadowed however by some controversy surrounding fan favorite Andrea Mangucci making a mistake and getting hit with a game loss. 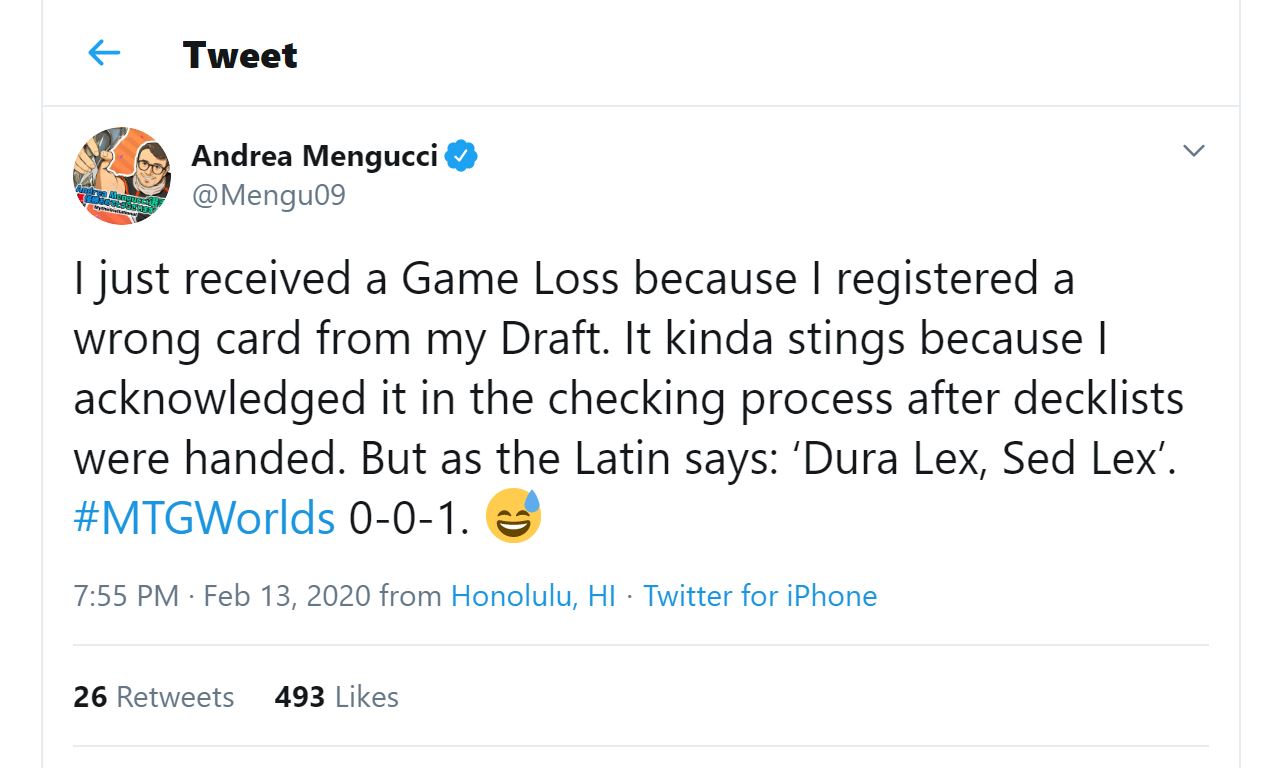 , prompting Paul and Brian to erroneously give his draft an A rating. This led many people online to call for pod draft capabilities in Arena, a feature which should really be here by now, and which would have prevented this whole debacle. Mangucci went 0-2 in the draft as well, and that game loss could have been the difference between making it into the winners bracket or not.

, giving him a solid deck he was fairly happy with. Javier's draft was a little bit clunkier unfortunately. He didn't end up using two of the rares he picked in Thassa's Oracle

, instead opting for a green and black deck with Setessan Champion

as one of the key cards. Unfortunately the broadcast showed the wrong decklist for Javier so we did not get to see the full list live, but we did see him pass on a Calix, Destiny's Hand

which ended up being the card to give him his second match loss of the draft.

Here are the rankings from each pod and the bracket when it was all said and done. 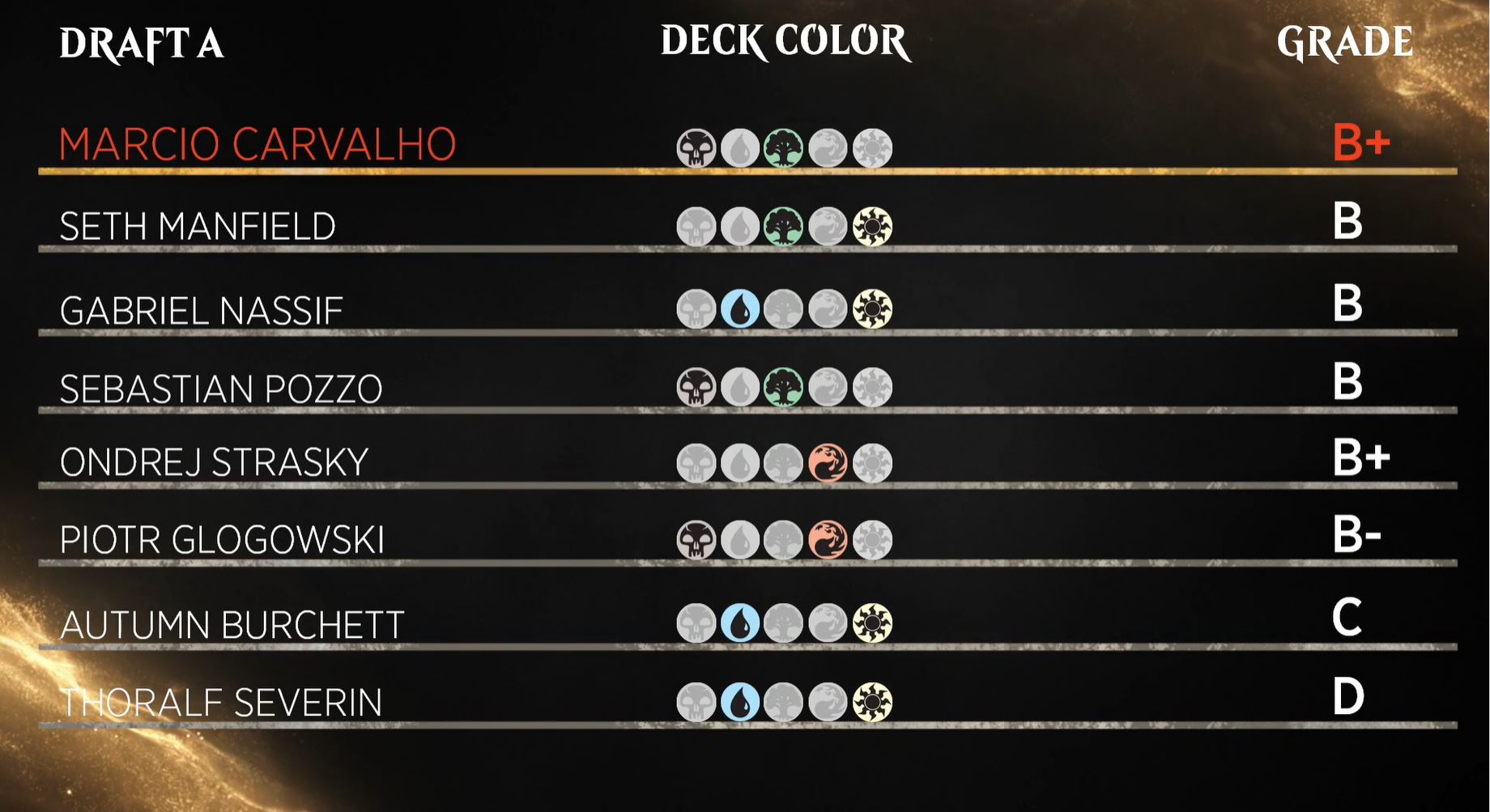 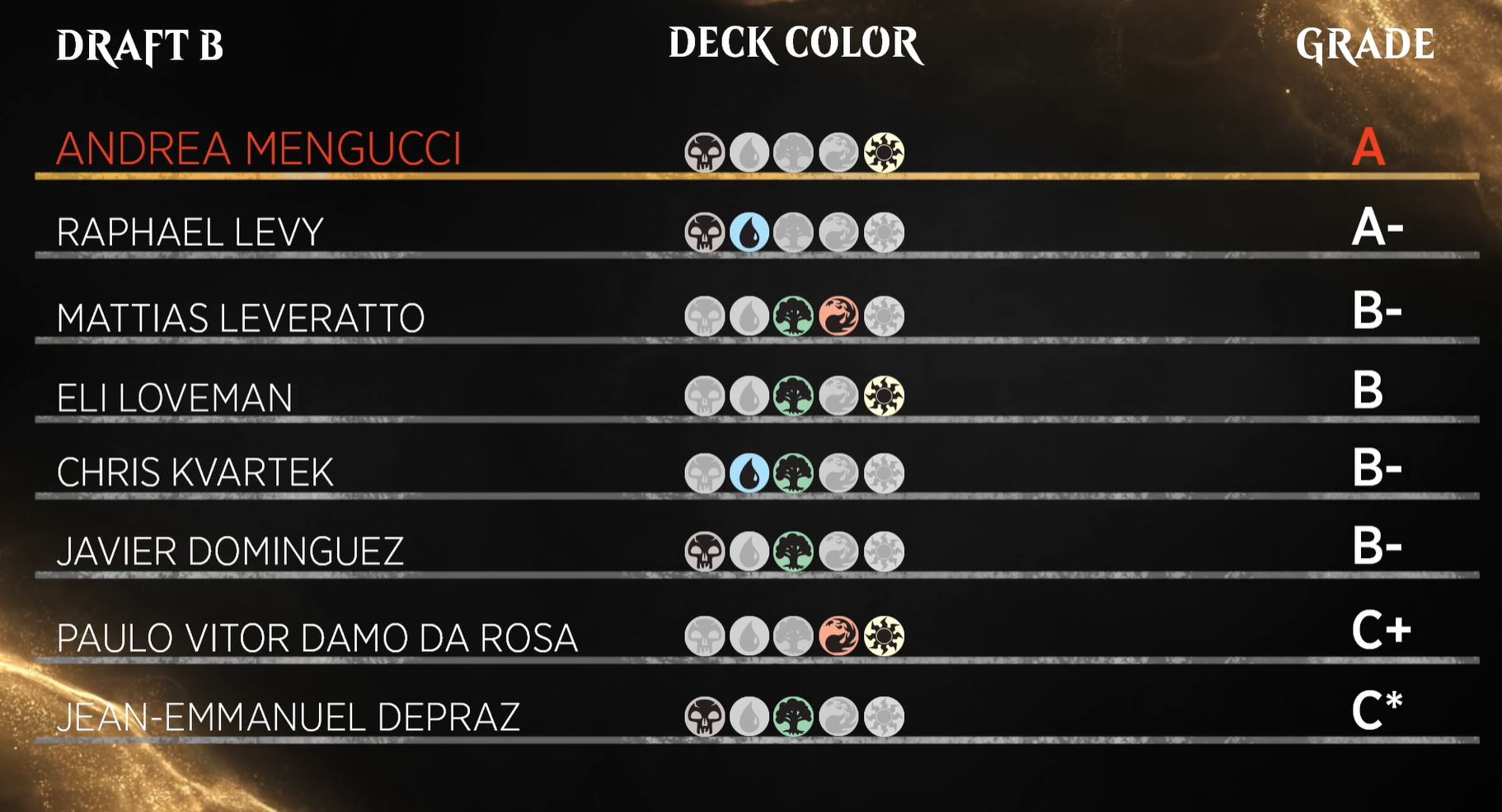 (Remember that Andrea Mangucci's ranking should have not actually been an A because of the registration error, and Jean-Emmanuel Depraz's ranking has an asterisk beside it because as Marshall said: "It gets an A for sweetness.") 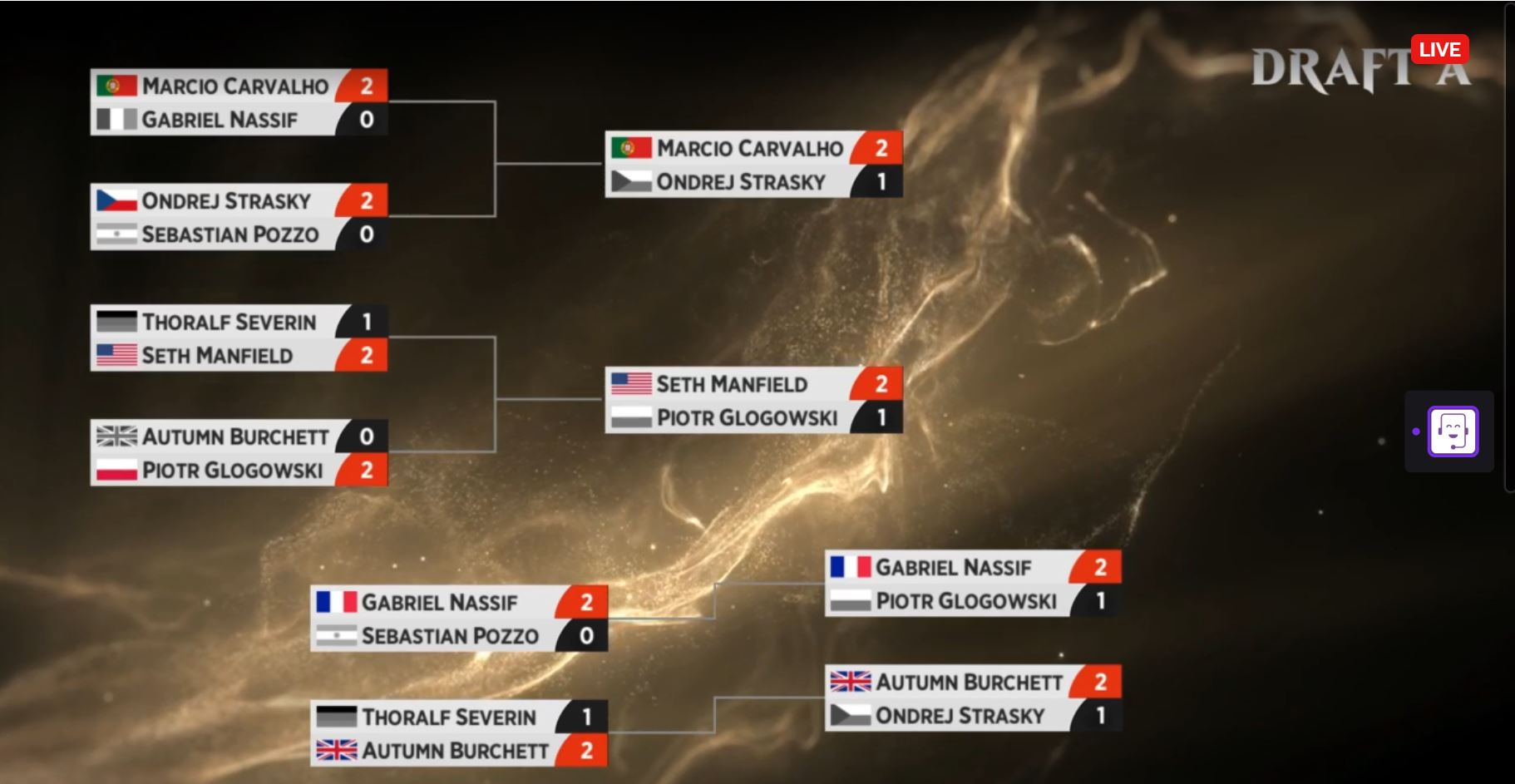 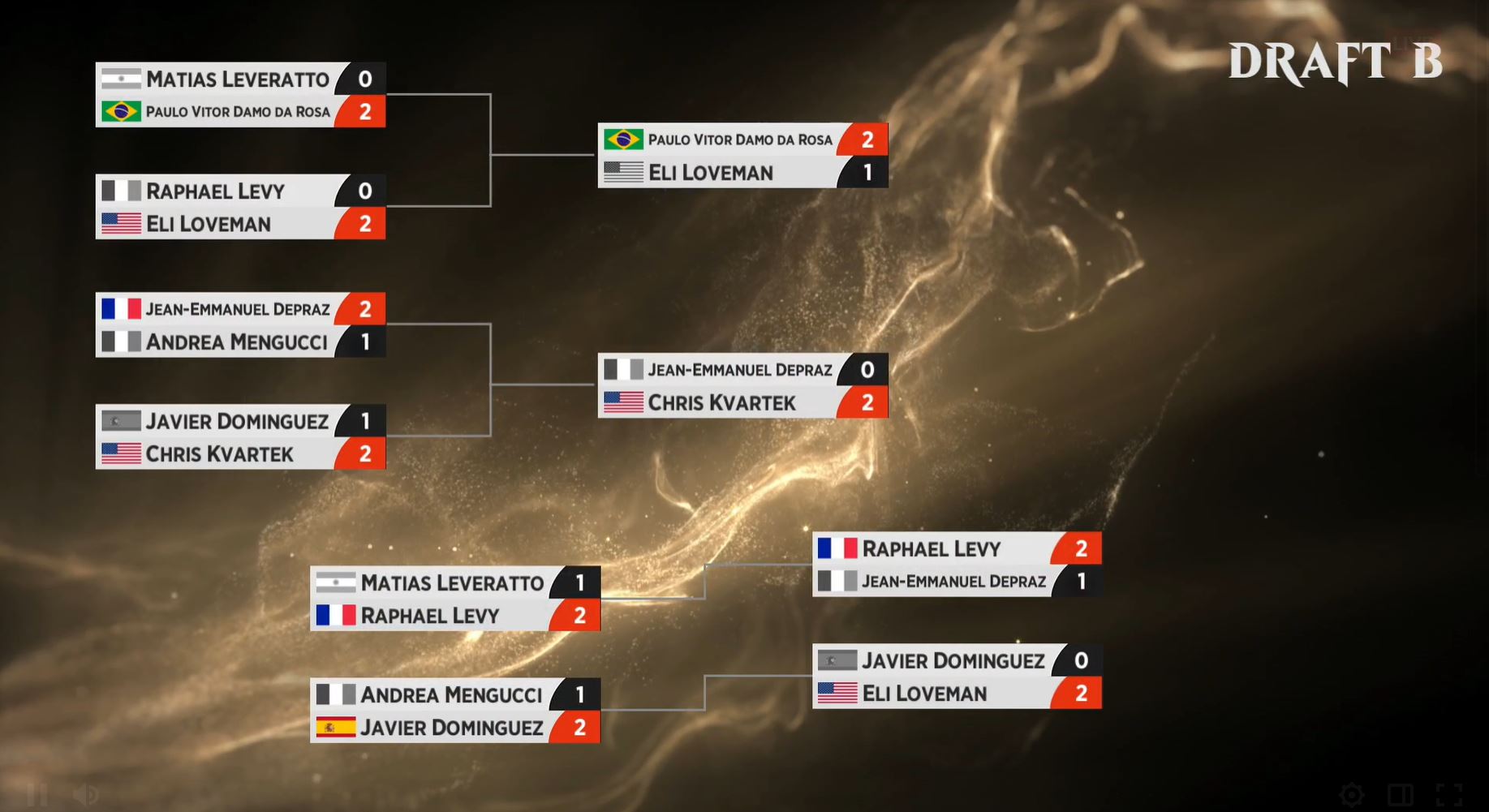 Every player who was able to get two wins in limited advanced to the "Winners Bracket," with all the players to got two losses advancing to the "Losers Bracket." This was incredibly important, because advancing to the winners bracket meant you could immediately move to the top 8 on day one and you had no chance of being eliminated. Talk about some intense draft games!

With draft out of the way, we moved on to Standard which will be the format for the rest of the tournament. If you missed it, here is the meta breakdown heading into the action. 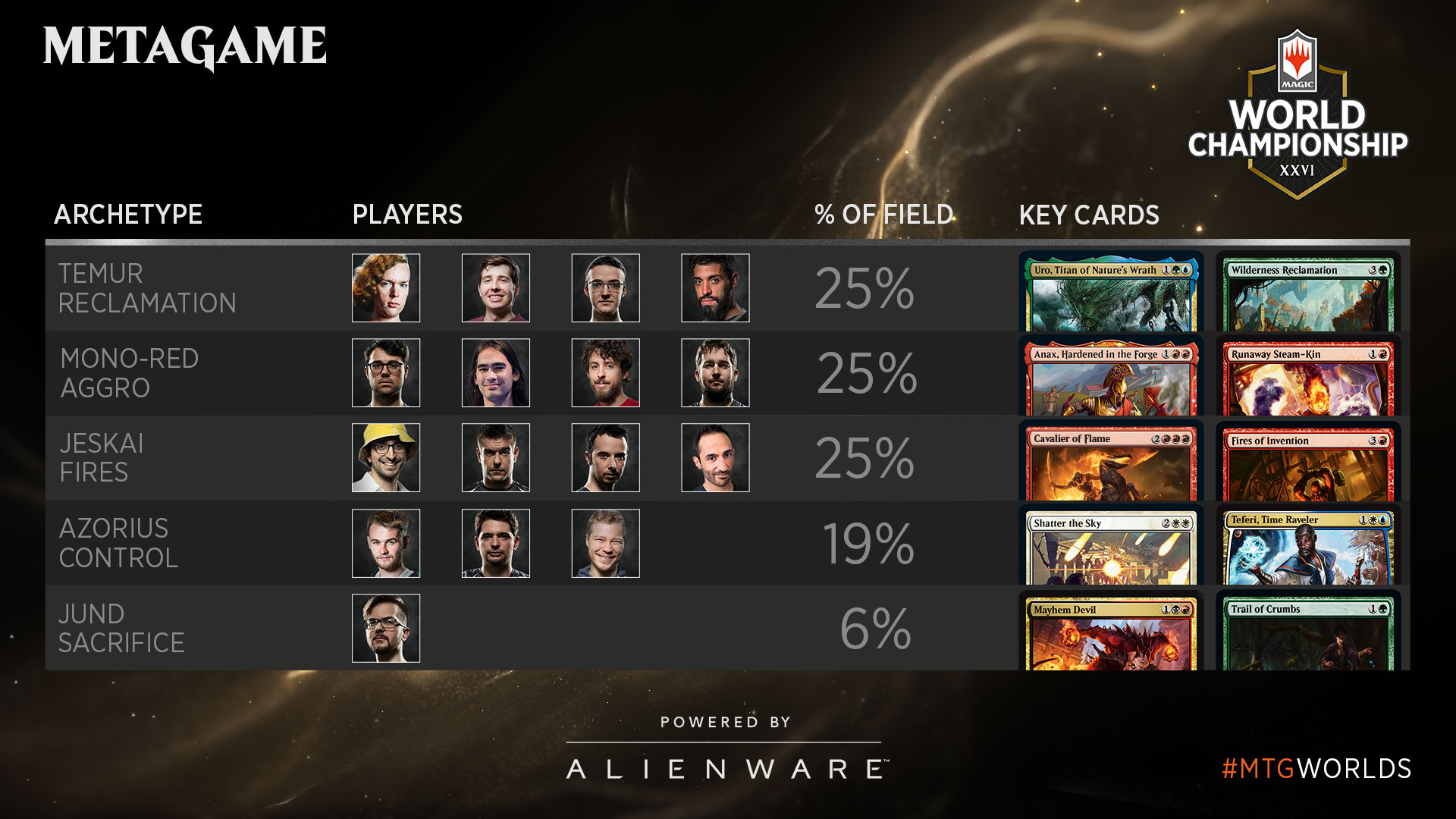 As Paul Cheon said, this created sort of a "Rock Paper Scissors" meta, in which match ups were extremely important to advancing. Mono Red seemed very weak against Jeskai Fires, but extremely powerful against Temur Reclamation, especially Chris Kvarteks version which did not run any wrath affects. There is a tweet going viral from Brian Braun Duin describing this situation perfectly: 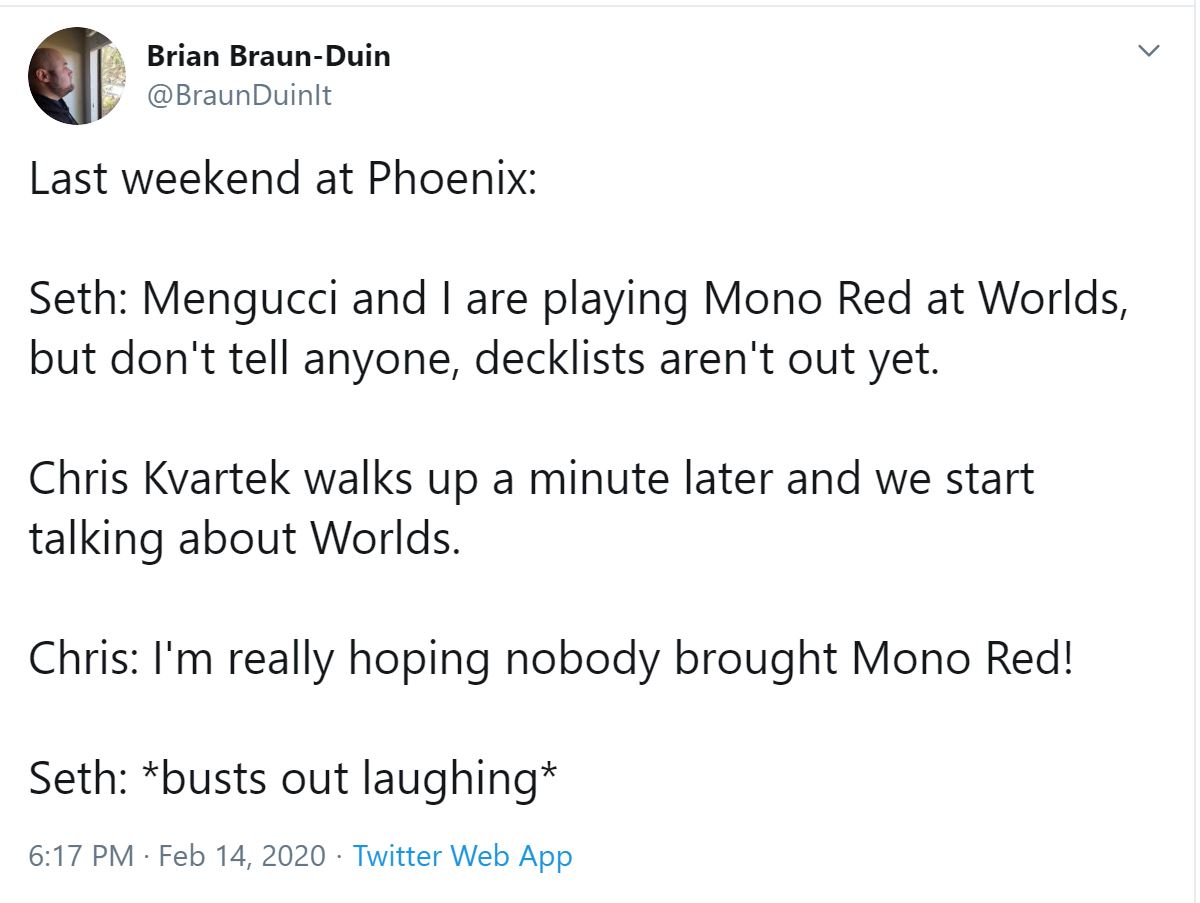 After the first day of action, here is how each deck is performing:

We do not have too much matchup data just yet, but Mono Red is the clear winner so far. It is 5-1 against Temur Reclamation at the moment, and has Seth Manfield feeling incredibly confident.

Check out the brackets from yesterday. 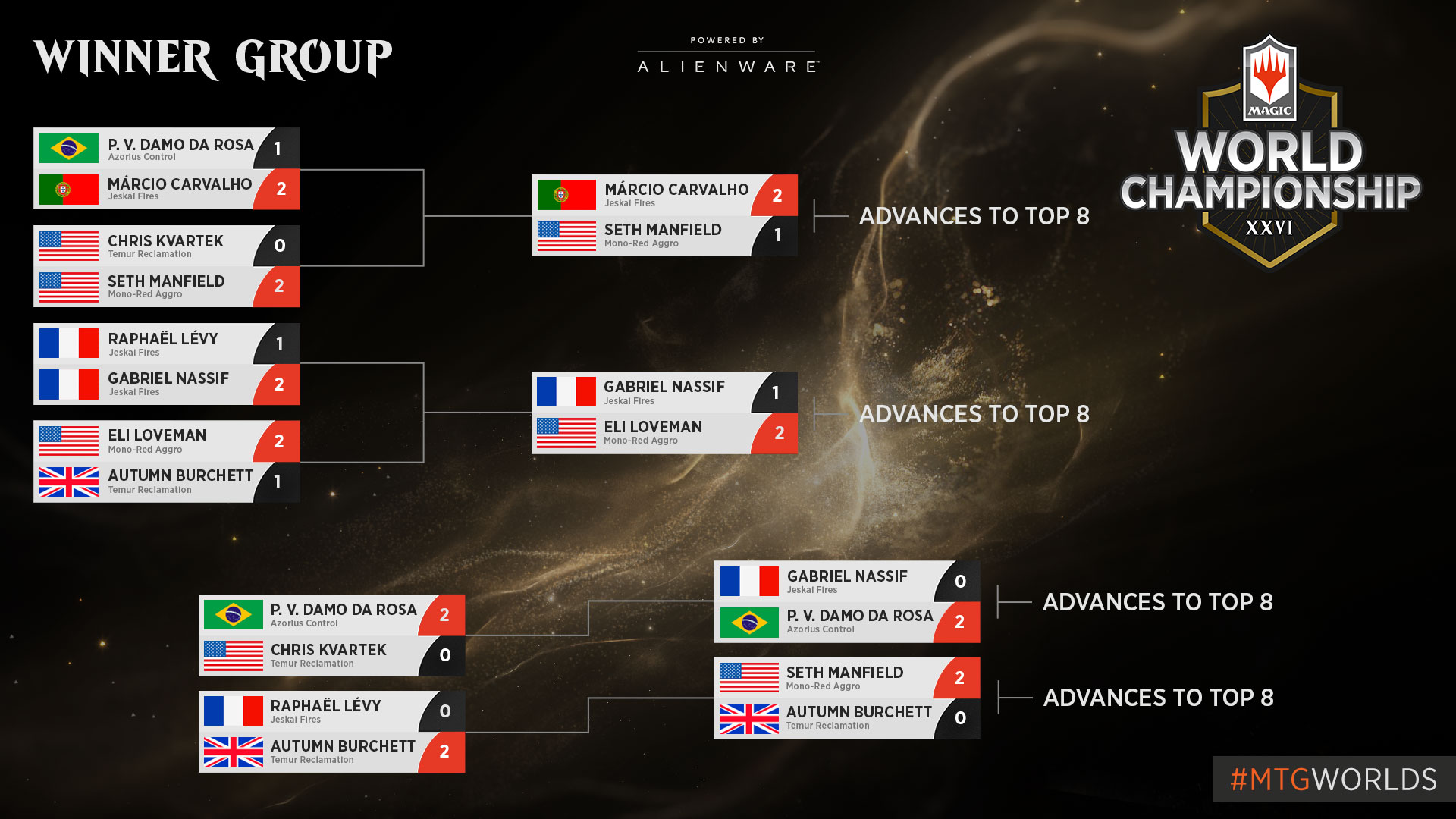 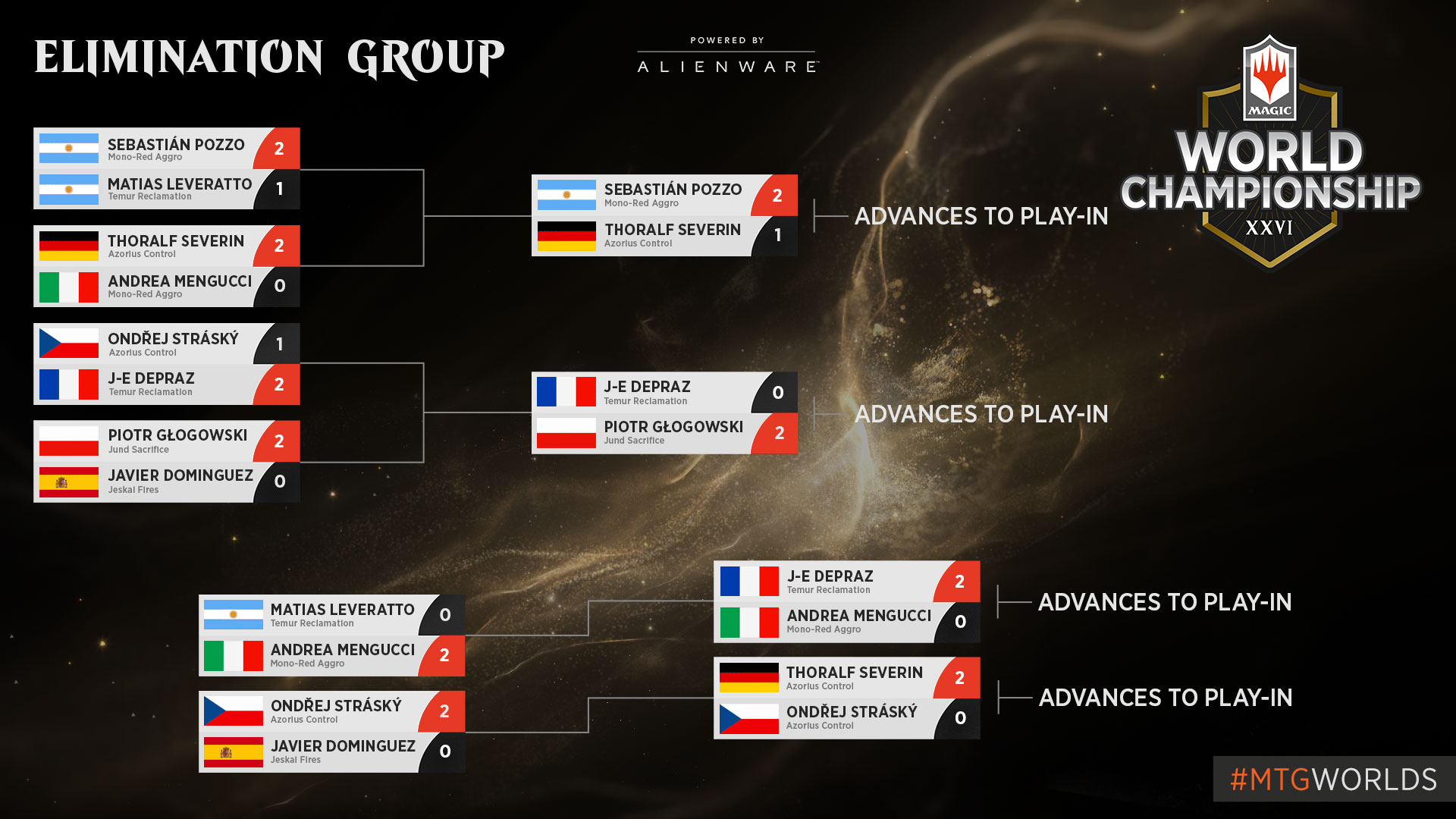 I think the biggest storylines from yesterday has to be the elimination of Javier Dominguez and Andrea Mangucci. In a tournament of this caliber, all the players are going to be world class, however those two players in particular were the predicted winners of many. Of course Javier was the defending World Champion and was coming off an incredible year, so to see him go out so early surprised a lot of people.

The other two eliminated players were Ondrej Strasky and Matias Leveratto, both Mythic Championship winners this year and both excellent players in their own right. Strasky was actually my #FindyourChampion winner going into the tournament, so no trophy pet for me this year! I am extremely confident however that we will see all of these players have continued success throughout 2020!

On the other side of the token, the four players advancing to the top 8 are Marcio Carvalho, Seth Manfield, Eli Loveman and PVDDR. Its rare you see a player as confident as Seth was, and this post match interview has to send a message to the rest of the field.

Javier Dominguez and Andrea Mangucci hired a personal trainer for the tournament, and Seth was spotted last night pumping some iron with them after a monster day yesterday. Will he carry that intensity all the way to the championship? We will have to see.

One of the most exciting moments yesterday came in the Azorious Control mirror of Ondrej Strasky vs Thoralf Severin, in which the commentators thought Strasky had the game locked up, but didn't notice till the last minute that he was about to deck himself. Thoralf set up a masterful play to absorb his own Emergency Powers

, gaining the three life he needed to survive Strasky's attack and forcing a concession. An exhilarating moment, and one of many more to come over the next two days.

Today all the top 4 players from yesterday get to sleep in, scout the morning matches, and join in the afternoon session to whittle down the field to the top 4 over all.

From Pinnacle, here are the updated odds to win the tournament. 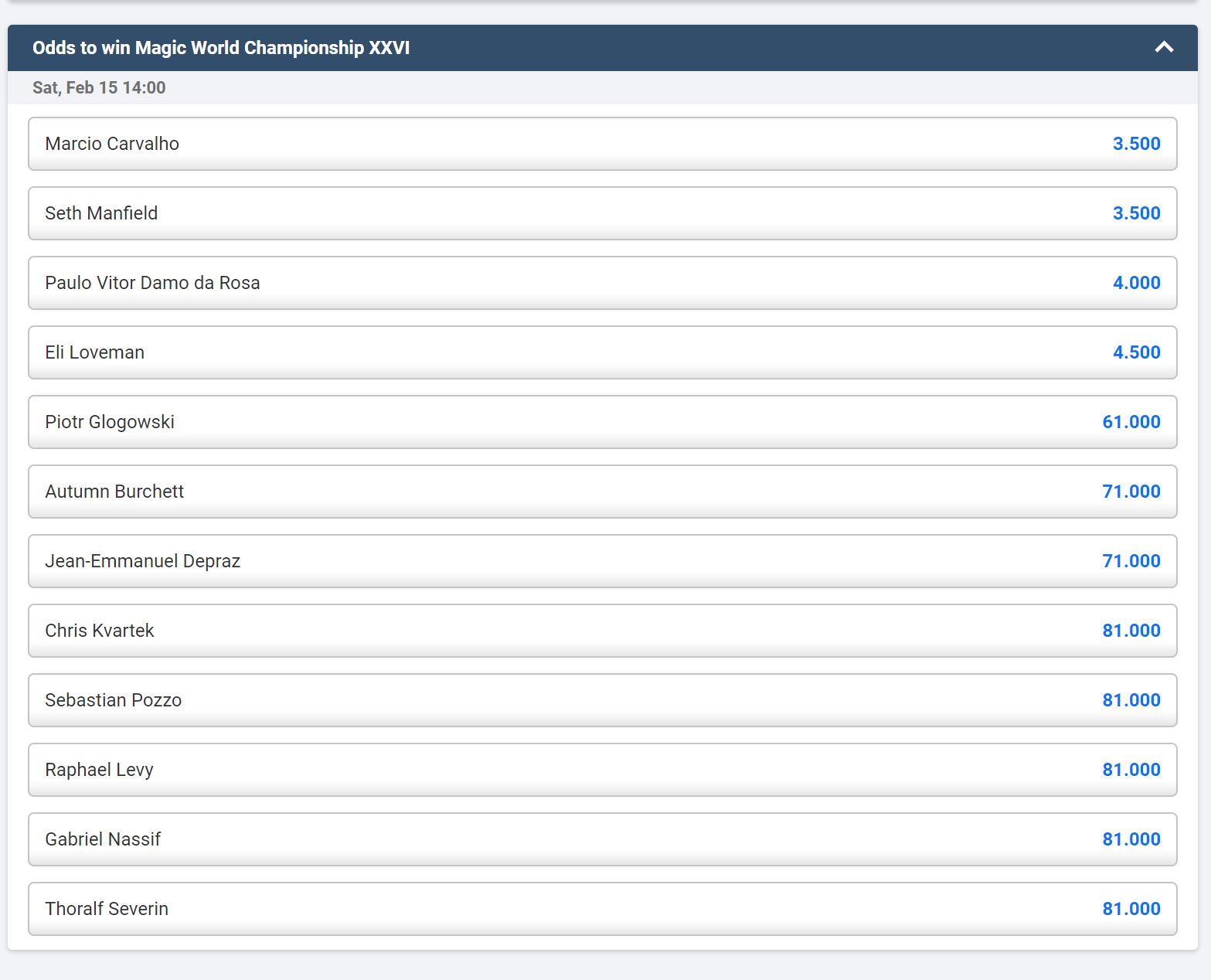 The most interesting line here for me is Kannister. He went 2-0 yesterday with Jund Sacrifice, and went undefeated in the last MC using the same archetype. He clearly knows this deck better than anyone else in the world, and could make a very sneaky run. He did not get much TV time in Standard yesterday, so we will have to see if he can keep coming up with just the right lines to secure the victory like he has in his last 10 or so tournament games with the deck.

Tune back in tommorrow for a recap of day 2, and a preview of day 3!