Motivation For The Deck

I put this deck together after playing two other decks, the Jace Belzenlok self mill and a reclamation deck I brew specifically for Parhellion II. The Jace Belzenlok deck feels objectively terrible due to the combo piece required for it to go off; the Parhellion deck was not doing too great either, but I noticed how often I was in the danger of decking myself. So I made this deck, with bant reclamation infrastructure and plays Jace together with a few other win cons.

What It Is Good Against

This deck fairs quite well against most creature decks, with the exceptions of certain gruul decks. It is also decent against monoG tron, dimir, sultai and grixis, which are popular in and out of ranked queues. It is also phenomenal against mill decks :)

What It is Bad Against

Mono red (who would have thought), any deck that plays [[Teferi, Time Raveler]] (what a surprise) or [[Narset, Parter of Veils]], RNA esper, and most aggro match-ups. Decks with strong enchantment destructions are also an ordeal.

How It Works (Why Would You Play It)

First let's see how the deck survives and stablizes, a challenge for all control decks:

Nothing out of the ordinary. Settle and Nova are the main motivation for playing white, as simic only has [[River's Rebuke]] for boardwipe. I play one copy of Angel for its versatility. An alternative boardwipe I experimented with is:

[[Single Combat]] not only circumvents indestructible effects, kills planeswalkers, but also stops opponents from playing threats for one extra turn, making your survival a lot easier.

Then we look at the ramping mechanisms:

These two cards are the reason for playing green. An early game [[Growth Spiral]] is very powerful in bringing your tap lands, boardwipes and [[Wilderness Reclamation]] online.

The most important facet of the deck is draw:

This combo is analogous to the wilderness explosion combo, but Finale is easier to cast in the early game if needs be, and untaps up to 5 lands afterwards. Due to the effect of [[Emergence Zone]], you can then cast [[Cleansing Nova]] or [[Single Combat]]. The draw from this combo is so potent that you can consider playing one copy instead to save wildcards/money, as its resolution usually beacons certain victory.

[[Dawn of Hope]] is usually a subpar drawing mechanism, as each draw costs 6 mana in most cases, but it is nevertheless a good card in conjunction with wilderness.

While the deck was conceived in service of the WAR Jace, there is virtue in diverse win conditions when creating a jank control deck.

[[Jace, Wielder of Mysteries]] is still the most reliable win con, as you are not required to overpower your opponents' creatures. He also lands with a health 4+1 loyalty points, so you can drop him early game unprotected relatively unpunished. He does have a strict color requirement, which is why we play two copies only.

[[Dawn of Hope]] is somewhat an optional card in this deck. It is an excellent mana sink for wilderness, flies under [[Single Combat]], and provides precious lifelink blockers. The drawback is that it crams into the already crowded two drop pool. You want to play it on T2 because you don't have much else going on, and Dawn doesn't do anything the turn you play it, but it is better to hold [[Negate]] and [[Growth Spiral]], or play the powerful [[Search for Azcanta]].

Parhelion is a stunt hard to pull off, but absolutely devastating when you manage to. Ususally it requires you to have a strong board with ample mana. It is possible to use Saheeli to copy a crewed Parhelion, keep the copy and recrew the copy. Doing so requires 9 servo tokens and sacrifices Parhelion in the process, but allows you to "haste" it for an immediate 13 flying damage and 2 4/4 vigilant angel tokens. You can also wait a turn to animate it with [[Karn, the Great Creator]] for 16 flying damage.

Saheeli is one of the best, if not the best uncommon planeswalker in standard. She has a health 5 starting loyalty and does not need her active to be impactful. Every single spell except [[Angel of Grace]] in our deck generates a servo token, which not only keeps us alive against creatures, but also gives us some backswing potential. Keep in mind that you can -2 Saheeli to copy [[Angel of Grace]] or Dawn soldier tokens.

While Angel's primary duty is to cast shallow grave, she is also a flyer with respectable stats. Teaming up with Saheeli, the pair could put opponent on a two turn clock. Angel is also one of the few tools we possess against enemy planeswalkers.

The WAR Karn is a very flexible card even outside dedicated artifact decks. He functions as two uses of [[Mastermind's Acquisition]] for tutoring artifacts. [[Sorcerous Spyglass]], [[Thaumatic Compass]] and [[Meteor Golem]] offer strong removal effects, and [[God-Pharaoh's Statue]], [[Parhellion II]] allow you to increase your lead. [[The Immortal Sun]] is surprising quite good in many cases, since Jace and Saheeli can still function with passive effects. Blink and Negate are good cards, and Tamiyo allows us to cycle removals and fog from graveyard while digging for key cards like reclamation.

If you are new to using reclamation, remeber to set a stop at each of your end step. Manually tap lands for mana.

Play the two teferi cards if you can stomach them. They are viable too.

AllanBowling 28 May 2019 21:11
This is the first self mill deck I have played that can routinely pull off the combo, 10/10 deck friend, love it.
nyxnyxnyxnyx2 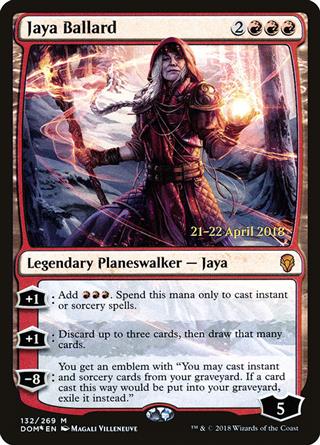