I decided on a new "Feather, the Redeemed" approach. This brew does not pump creatures with shitty spells that generate draw like in Boros. This brew simply uses the best target creature spells money can buy from gruul. So we ended up somewhere in Naya. Even if the opponent kills all 4 copies of Feather, the Redeemed then this deck could still be descent. This because the essence of this deck seems proliferate with a splash of reocurring spell-abuse, what was my goal to begin with.

The combination of "Feather, the Redeemed" and those 3 awesome gruulspells is absolutely bonkers. It is worth it to investigate the potential of this combo further. So I made a deck for Gruul Stomp in Naya with heavy hitters like Raze-Boar, Forerunner & Ghalta. I hope to experience that having some huge creatures increases the value of the 3 awesome gruulspells and therefore the total effectiveness of the deck and the feather-gruul combo's. The weakness of gruul seems deathtouch so I will add [[sure strike]] instead of "Battlefield Promotion" in the stompdeck. After that experience I will make up my mind if proliferate is a more efficient way to go forward (or not).

I used the Profilerate deck 5/1 brewed by Crasychimp as a template for another Naya deck with Feather and gruul spells. After 25 games I basically got the same results and winrate. Gruul proliferate as a theme in naya feels lackluster in combination with feather+gruul spells. Proliferate is nice if every card adds something to the proliferate theme else it sux.

After these results I also tested a Naya Stomp deck with the same Feather+gruul spells combo in combination with Razeboar and three >7 drop creatures. After 25 games I achieved a 68% winrate and had 2 misplays (without misplays I could have achieved 78% winrate). I want to make the deck a little bit faster by replacing the >7drop creatures and add some lifegain early. This because against monored pelleka wurm does not have enough impact to change the game. Hopefully these 2 chances will improve the pace and efficiency against mono-decks and red in general, I want a reliable brew to take into ranked and test it there. Once the deck is finished, i'll post it on aetherhub in a seperate post. 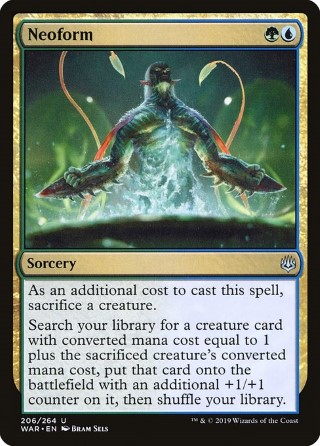