Counters.  Lots and lots of counters.  This deck plans to get them out and keep them growing.

There are currently 4 types of important counters in standard:

This deck wants to try to make use of most of the above.

Obviously, +1/+1 counters can be used to make creatures big.  Most big creatures are too easy to just chump block, but big fliers are harder to handle.  At least 1 creature must be cheap, flying, and easy to get a +1/+1 counter onto.  [[Merfolk Skydiver]] fits this description, with the added benefit of being able to also proliferate, slightly more easily than [[Karn's Bastion]] (as the required {U}{G} must be on board to have cast the skydiver).

However, there are more uses with +1/+1 counters than just growing creatures.  [[Trollbed Guardian]] and [[Zegana, Utopian Speaker]] either would allow trample to creatures with +1/+1 counters while [[Skatewing Spy]] would allow flying.  There are also cards that have additional effects when +1/+1 counters are added--with [[Animation Module]] no longer in standard, [[Benthic Biomancer]], [[Growth-Chamber Guardian]], and [[Sharktocrab]] with their Adapt triggers are obvious candidates.  [[Growth-Chamber Guardian]] has minimal upside (useful for at most 2 proliferates).  [[Benthic Biomancer]] has more potential, but pure card draw would be preferable.  [[Sharktocrab]] is in a perfect spot to make use of +1/+1 counters, though--sharing colors with the [[Merfolk Skydiver]], it also removes many potential threats from play and opens up the skies for flying attacks to get through more easily.

Very few planeswalkers care about loyalty counters beyond it being their life total and frequency at which they can use abilities ([[Chandra, Fire Artisan]] being a notable exception).  As such, planeswalkers should either have very powerful abilities that can be helpful more often, or should assist in increasing the number of counters on the board.

[[Ajani, Adversary of Tyrants]], [[Ajani, the Greathearted]], [[Jace, Arcane Strategist]], [[Jiang Yanggu, Wildcrafter]], [[Nissa, Who Shakes the World]], and [[Vivien of the Arkbow]] all add counters to the board.  Of these, both Ajani's and Jace have significant additional benefit.  By the time a 6 CMC [[Jace, Arcane Strategist]] can land on the board, it is likely to add less benefit than the mana would otherwise be used for (more proliferation), but both Ajanis fit the needs of the deck well (although the 2{W} cost of [[Ajani, Adversary of Tyrants]] may be too high).

On the other side, [[Kaya, Bane of the Dead]], [[The Wanderer]], [[Ugin, the Ineffable]] all have strong removal as their minus abilities, while [[Tamiyo, Collector of Tales]] simply has a powerful minus and [[Teferi, Hero of Dominaria]] would benefit from getting to ultimate more quickly.  However, none of these cards appear to improve the deck more than any cards they would replace.

There are a few artifacts that use charge counters in the current standard rotation.  [[Transomgrifying Wand]] is significantly better if it's able to gain additional charges, and [[Primal Amulet]] would be able to transform more quickly, but given sufficient proliferation [[Magistrate's Scepter]] has the potential of yielding infinite turns.

There are three Sagas thatwork toward the goal of a large number of counters: [[Song of Freyalise]], [[Triumph of Gerrard]], and [[Phyrexian Scriptures]].  Of these, [[Song of Freyalise]] is the one that most fits into the deck, but it itself gains little meaningful benefit from proliferation.  Generally a card slot taken by it would be better served by a [[Courage in Crisis]].

Important to note however, it is possible to add lore counters to opponent's Sagas, preventing them from getting full benefit of their spells.  For example, ticking a [[History of Benalia]] up to a 3rd lore counter as the result of combat would give the opponent's knights +2/+1 after combat on your turn--not very useful for them!

Beyond getting counters onto the board, there need to be ways to proliferate them.  [[Evolution Sage]] and [[Karn's Bastion]] help remove the sting of flooding while [[Merfolk Skydiver]], [[Polenbright Druid]] and [[Courage in Crisis]] all both allow adding counters in addition to allowing proliferation of counters.

The ideal starting hand includes a [[Grateful Apparition]], either a [[Pollenbright Druid]] or a [[Merfolk Skydiver]], and the land to get both out.  An ideal first few turns would look something like:

Turn 4: Land, either [[Sharktocrab]] or [[Ajani, the Greathearted]] (using his -2), attacking to proliferate.

Beyond the first few turns, the goal would be to keep the opponent's threats at bay while attacking in the air.  [[Ajani, the Greathearted]]'s vigilance helps with both of these goals.

Frequently one of the key cards in this deck, it is tempting to put a sole +1/+1 counter on it so it will proliferate and grow larger as it attacks, or allowing it to attack through flying defenses to continue proliferating.  This is almost always a mistake--it makes the card a bigger threat and more likely to be removed.  Having an [[Ajani, Adversary of Tyrants]] out to bring it back if removed does make putting counters here an easier choice.

2{U}{G} is an expensive +1/+1 counter.  It may make sense to put the counter on this card from another source, both to get an opponent's creature tapped cheaply, and to enable proliferation more quickly.

Using the [[Magistrate's Scepter]] is difficult--seldom is it good to get out turn 3 for a turn 4 activation.  Getting out and activating when there are 7 lands on the table is better, especially if a profilerate (or two) can occur that turn.  It's also important to not take the free turn at 3 counters unless it either guarantees a win or prevents a guaranteed loss.  Much better to get to 4 to keep the 1 counter to proliferate off of.

This both is a way to get +1/+1 counters onto the board (and to add to [[Sharktocrab]] if a flier needs to be taken out of the picture for the [[Grateful Apparition]] to get through), but also is the card draw for the deck.

Some cards feel like they fit, but didn't make the cut:

[[Simic Ascendency]] -- Proliferating reduces the number of +1/+1 counters needed, but this card is unlikely to win the game when it otherwise would have been a loss.

[[Blast Zone]] -- Potentially good for taking out some tiny or huge threats, but there are too many 2-4CMC cards this deck wants to keep around.  And [[Karn's Bastion]] already has colorless mana, more is going to make it hard to get key cards out early.

Check Lands -- More check lands might reduce the cost necessary to get key cards out, however they also add more potential to not be able to get the needed land usable at all at the required time.  Instead, a full set of shock lands is preferred, as it's worth the life to be more certain to get cards played when needed. 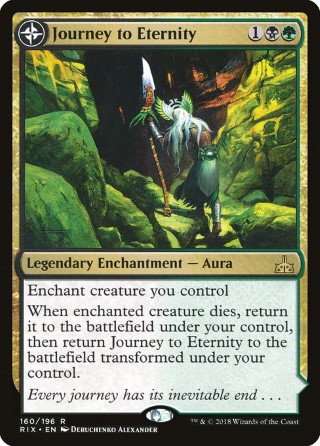