Why you should use MTG Arena Deck Trackers

In contrast to the papers version of Magic: The Gathering, the digital version of Magic gives you access to some extra tools. Whether you are a veteran player, a new beginner, or just a collector, a good deck tracker can help you in several ways. Let us take a look at how Deck Trackers can enhance your MTG experience. 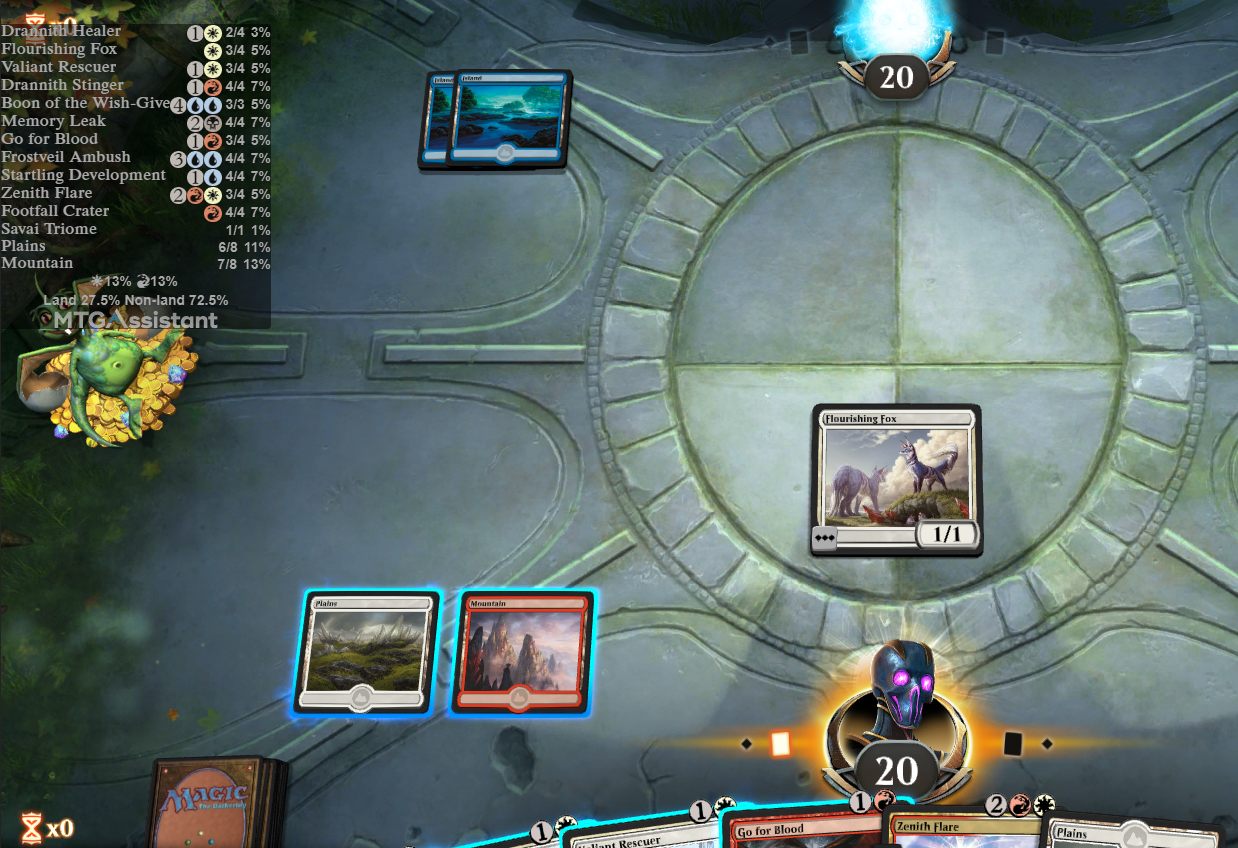 Deck tracking gives you an edge, but is it cheating? Image from MTGA Assistant

Seeing as they give you an advantage by knowing the chance of drawing different cards while playing, some players consider this as cheating. The official stance of this from Wizards and their MTG Arena team is that as long as this is known game information it is not cheating. Meaning that since you know the contents of your deck before playing, and what cards you have drawn during the game you could if you wanted to, write down all this information on paper and calculate what the chances are for drawing different cards. Using a deck tracker is then by definition not cheating. While it gives you information that would be hard to keep track of without a third-party tool, it is by definition not cheating.

Another factor here is that all the information the deck trackers collects is from debug log outputs the MTG Arena developers left there to help not only themselves with debugging but also third-party tools to track information. This is important not only for individuals but also for MTG Arena as an e-sport so viewers on streaming sites like Twitch.tv can interact with the stream and look at third-party apps and get more information on the players' hands and the cards on the battlefield.

Extra help for both playing and drafting

Drafting is a very popular format in Magic: The Gathering. It is a game mode where you build your deck out of card packs and it requires good knowledge on the cards themselves and their synergies in addition to being good at playing the game. 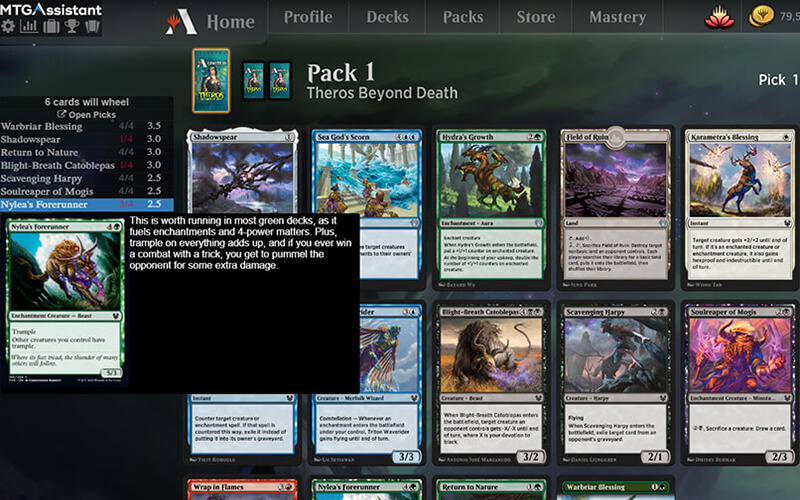 Get extra help with building your decks in the popular draft format. Image from MTGA Assistant

While tracking the contents of your library during a match is helpful for everyone since it is a hard thing to do during gameplay, extensions like MTGA Assistant offers draft helper tools to help players build their Limited decks successfully. With ratings and comments from professionals like Luis-Scott Vargas, it makes it easier for players new to the format to build a playable deck. Limited Draft is considered one of the hardest formats to master in MTG.

While experienced players might prefer drafting without the extra help they do get the benefit of being able to see which cards they already own when picking them for their deck. A luxury not built into the game, this can prove useful if they prefer playing both Limited and Constructed as they can build their collection quicker. 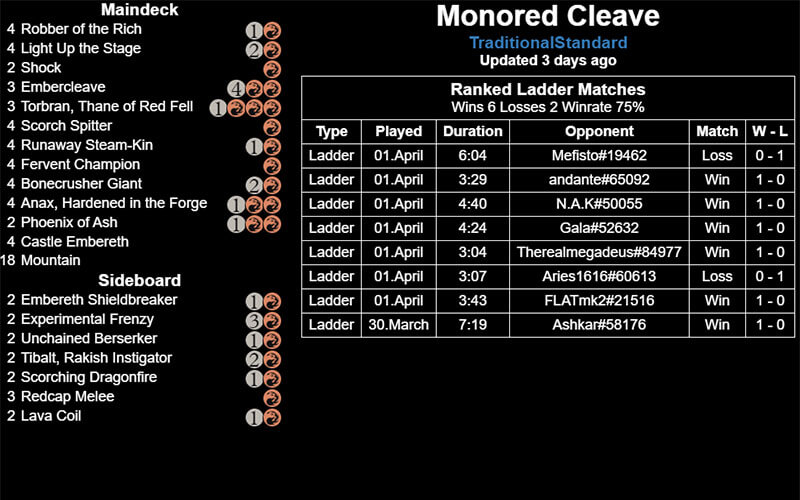 It is not always easy to get a feeling of how your decks are performing, do you actually win more than you lose? How has your deck performed lately after that change you did? Currently, there is nothing in the native client that tracks your win rate, so to be able to know how you are performing there are two options; Write down your results or use a third-party tool.

I would recommend the latter as it is by far the easiest solution, let your deck tracker do the job and calculate your win rates, while you can focus on playing and improving your game. 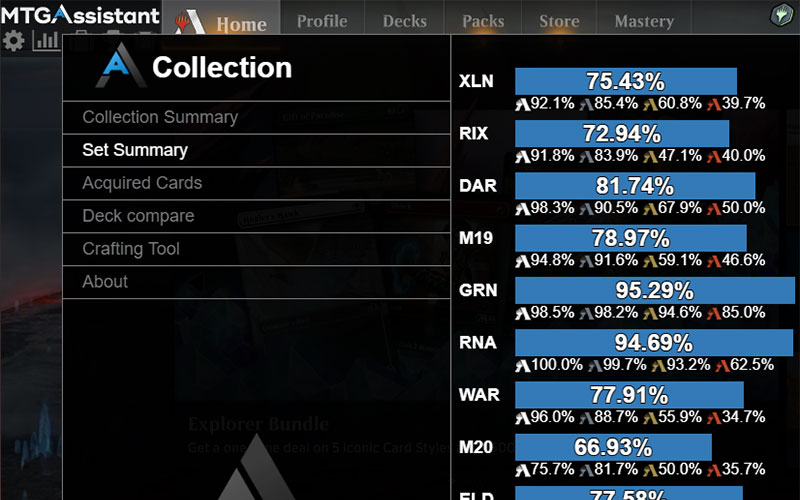 A full overview of your collection. Image from MTGA Assistant

For a Collectors card game, MTG Arena has surprisingly few inbuilt functions for tracking your collection progress. Sure you can browse your full inventory, but nowhere is there anything that tells you how many cards you have collected.

This is where extensions like MTG Assistant comes in, giving you a full overview of your progress in each of the sets that have been released, together with rarity, color, land and overall total progress of your card collection. Another hidden feature is the famous Vault progress that is hidden by default for users, The only way to see this is by looking into the huge text file that is the log output. Or, yes you guessed it; By using a third-party tool to tell you.

I hope this has given you some perspective on why you should use deck trackers and what kind of value they can bring you as a Magic player. While I am actively contributing to the MTGA Assistant project, there are several deck tracker projects out there. But I can say that the assistant is one of the, if not the most feature-complete extension for MTG Arena.

Flashing_Lights 06 Aug 2020 14:03
Hi Andre,
I agree with most of what you say - deck tracking is really important, especially when reviewing the performance of the deck (I tend not to use it in the actual game).
But when tweaking decks you can see what it does well against - and what it does less so well against. Then look at the Meta - if your deck is not doing well against the top 3 Meta decks you are not likely to get ahead and climb the rankings.
I will try MTGA assistant.

andreliverod 20 Jun 2020 11:44
@Flashing_Lights: You should try this then. Untapped does not even have half of what we provide.
@FuryofChromat: If you didn't enable detailed logging that would happen. But we fixed that so that people who did not do it do not get that error any more.
@pokemonynch: It does now.
Flashing_Lights 20 Jun 2020 02:16
I use Untapped - Been away for a few months not playing but it still seems the best
FuryofChromat 16 May 2020 16:00
Every time i would queue for a game the Brawl metagame pop up would be on my screen during match finding. Could not find any help on the issue so i un installed MTGA assistant.
pokemonych 15 May 2020 13:57
Unfortunately currently draft assistance doesn't work for human drafts. I think you should mention it. As it quite misleading.
infinite 14 May 2020 19:45
DRINK THE KOOL-AID!!!