Wizards has announced on Twitter that the next banlist update is coming on 5/18. The full announcement is reproduced below:

One week from today on 5/18 will be the next Banned & Restricted update, impacting the Vintage, Legacy, and Brawl formats. MTGO Leagues for those formats will end at that time and be restarted with the updates.

Let's quickly break down what the likely ban targets are!

Lurrus of the Dream Den

Lurrus has quickly become a menance in the Vintage metagame, taking up over 60% of the meta. Vintage has generally had cards restricted rather than outright banned, but Lurrus is being used as a Companion in these decks. Since he is only a one-of in these decks, Wizards may make the unpredecented move of banning it out of the format. Another possibility that Wizards can do is prevent Lurrus from being played as a companion.

Lurrus of the Dream Den

Surprise, surprise. Lurrus is also at the top of the Legacy metagame too. Zirda is also being played as well, but not nearly as much as Lurrus. I felt Zirda was worth mentioning as well, since another possibility of these banlist updates is just banning Companion cards from being your Companion. Companions are broken because they always get to start in your starting hand; the cards when played normally aren't nearly as broken. 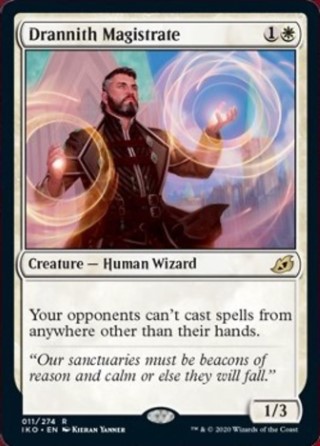 As announced on the Weekly MTG stream 2 weeks ago, Magistrate is likely going to eat the banning here. Magistrate prevents players from casting their commander, so it makes sense this will eat a ban, especially considering that Sorcerous Spyglass

is also banned in Brawl.

Surprisingly, Wizards isn't moving with any bannings in it's other formats. Companions are running amok in other formats as well, but it's likely that Wizards wants to wait to see how the meta shakes up in other formats. Lurrus is a top offender in older formats, so Wizards probably wanted to move quickly with dealing with it.

What cards do you think will be banned in the upcoming update? Or maybe do you think Wizards will have a surprise banning in one of the formats that wasn't listed in their tweet?

Kagros 14 May 2020 02:29
One reason a card can get banned is that it does not encourage deck diversity, aka, you start your deck building by including side card. This is why Smuggler's Copter was banned in Standard and Pioneer (RIP my copter). Lurrus fits this reason quite well in the Eternal formats. I probably should have put that reason in the article.

I think they ban those cards in Brawl because they don't want to accidentally create a prison-like lock to prevent players from playing their commander.
narusetto 13 May 2020 07:14
I do not understand why Drannith Magistrate and Sorcerous Spyglass are banned in Brawl. Sure, they prevent casting your commander, but you should have removal for that. It boggles my mind that there weren't any bans in other formats. Standard is basically a game where the one who cheats out Agent of Treachery fastest wins the game.
MakiMaki 13 May 2020 07:02
A lot of parts in this article read like a card being played a lot would be enough reason to justify a ban. I'm aware it's not meant that way, but still ... wording.^^