MTG Arena is a great way to play Magic the Gathering and for many, climbing the ranked ladder and reaching Mythic is a goal. Not always for reaching the Mythic Qualifier but for the enjoyment of reaching the top. In this article, we will go a couple of methods to reach Mythic, the easiest way to qualify for the Invitationals and the most efficient way from a free to play perspective.

To get invited to the Mythic Qualifier you need to reach top 1200 ranked in Constructed or Limited, earlier this was top 1000 but it has now been extended. There are far more people climbing the Constructed ladder, unlike limited where you have to pay resources to play you play for free and you have the option to either play a quick Standard match or the longer Traditional Standard mode. Recently Wizards also added two more ranked ladders with Historic which are time-limited. This means four free modes to play in, assuming you have a good deck of course. Competition is hard, there are a lot of good players that know how to make the correct plays. Limited is the stark contrast to the Constructed mode and overlooked by most people.

There are hardly even 1200 players in total that bothers with qualifying in Limited. Your opponents are picked from a far smaller pool and while the game tries to rank you against players of the same level, you are often facing players of other ranks as it is weighted on the number of wins in the draft to in addition to your rank. If you then combine this with drafting a lot early when a new set releases it means that you as a higher ranked player have a big chance of pairing against lower-ranked players that wants to try out a new set. As someone who wants to reach Mythic go for it as early in the season as possible, this is true for both the Limited and Constructed Ladder, but the effect is even stronger in Limited than it is in Constructed.

From looking at people climbing up to Constructed Mythic as early as day one of a season on the MTGA Assistant Ladder we see that their rank stays within top 1200 all the way until the season ends, the earlier you get into top-ranked Mythic the higher the chances you stay there throughout the whole season. In Limited, early Mythic basically guarantees you a spot in the Mythic Qualifier. In Constructed you might have to play some matches at the end of the season if you were a bit late to top placements, but this means you can relax throughout the whole month if you put in the work at the beginning. Knowledge of what the bots pick also gives you an extra edge and this can only be learned by experience and observations. The draft bots usually pick cards by color synergy and at the start of the season, they are way "weaker" than they are at the end as Wotc adjusts them according to their data throughout the season. 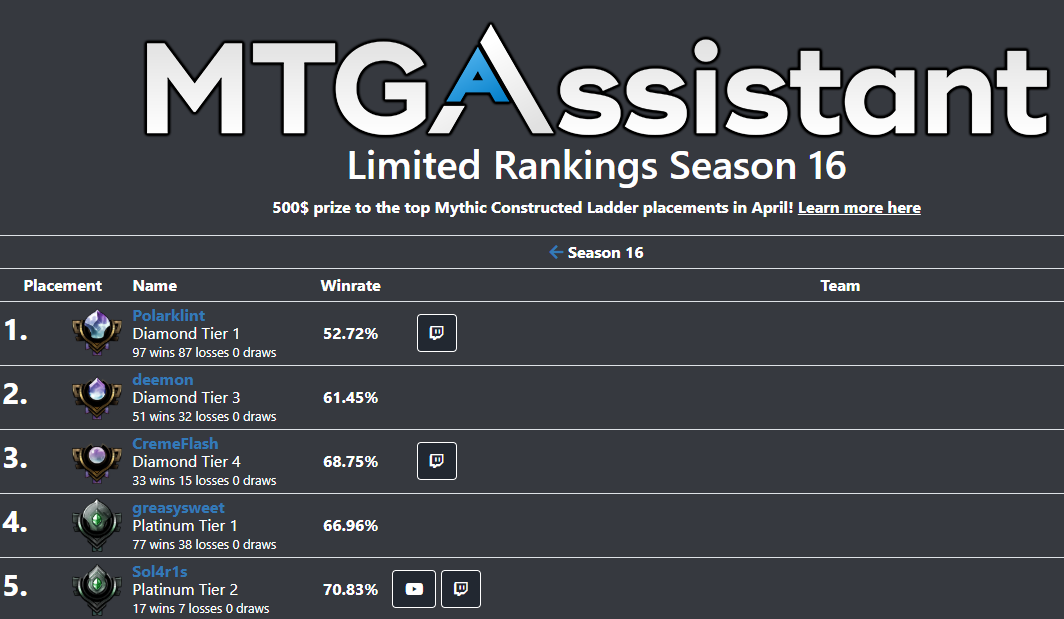 This trick is nothing new and it has been known since the first season of the Mythic Ranked ladder, but the Limited ranks are still not seeing many Mythic Qualifiers. Limited is a hard format and requires you to study and learn the cards in the set to get an advantage. There are far less good Limited players than there are Standard players and the lines are more complex. This paired with the cost of entry of limited makes it a hard buy for most players causing the top-ranked ladders to be sparsely populated. While climbing limited is the easiest way to reach the Mythic Qualifiers it requires effort and resources if you are not able to go infinite, the good news is that you can use both gold and gems to pay for the entry.

If you are new to Limited look at this as an opportunity to grow as a Magic player and start playing, if you decide to stick to Constructed just know that the trick to both ladders is getting early Mythic, the sooner the better. If you reach Mythic you will start next season on Platinum making it easier to quickly ascend the ladder.

Is it worth it?

If you are a competitive player and enjoy playing the best to improve your skill, climbing and improving is part of the fun. Reaching the top of Mythic is a big-time investment and a lot of work and the motivation for doing so should be because you enjoy it. The game rewards for reaching Mythic is not much, and the chances for winning the Qualifier to get into the Mythic Invitations are low. You are meeting over 2000 of MTG Arenas' best and most dedicated players and have to beat them in a special tournament. do not force yourself to grind for if you do not have fun, so remember it is all about enjoying your path!