Way back in June of 2019, I started tracking rank decay and developing a system that can allow me to identify a sequence of “safe” ranks, such that in succeeding months, if I find that I have reached a safe rank (e.g., #66 8 days before the end of the season back in 2019), I can stop playing the ladder with some assurance that I will stay within the top 1200. My system has worked well after gathering enough data in 2019, and I used the same data in 2020. However, by April of 2020, I noticed that decay had sped up, indicating that more people are trying to get to the top 1200 in 2020 than there were in 2019. This is a good sign that the game is experiencing significant growth, but at the same time it meant that I needed to track more data for use in succeeding seasons. This is exactly what I did, and by the following months, I was comfortably back to identifying safe ranks with new data. The following figure shows data gathered from August (used data from 2 players), and November. 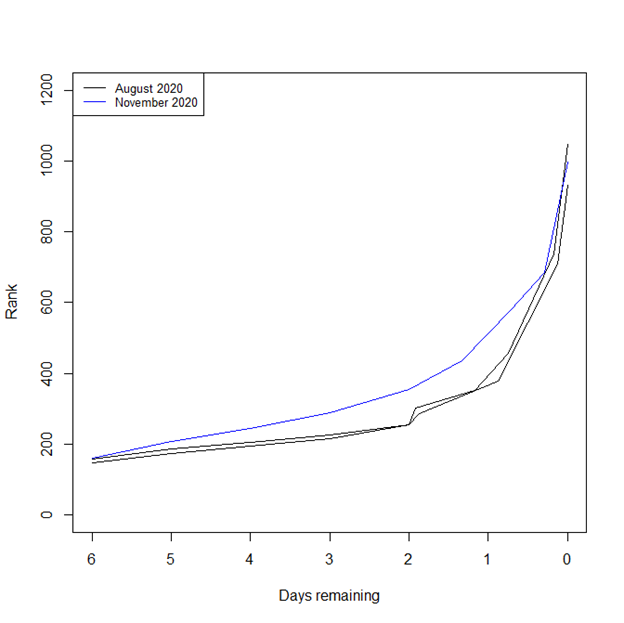 As shown here, rank decay six days or closer to the end of the season was still stable. That is, you can choose to park rank at any point on the line and you would be safe for top 1200. I was able to use this data to park ranks whenever I needed to in the succeeding seasons (there were some months when I did not need to bother with ranks since I made Day 2 of the qualifiers during the previous month).

Many players have also used my system for sitting rank and were also having success in doing so. However, in January of 2021, one of those players who had relied on the data to stay safe six days before the end of the season found that decay sped up and he was no longer safe looking at data 24 hours before the end of the season. He still made top 1200 after playing more games upon realization that his rank was not safe, but this did give me motivation to gather more data again. However, this would not happen until March of 2021, since I made Day 2 in January and so did not need to rank up for February.

So, when I did start tracking data in March here is what I got. 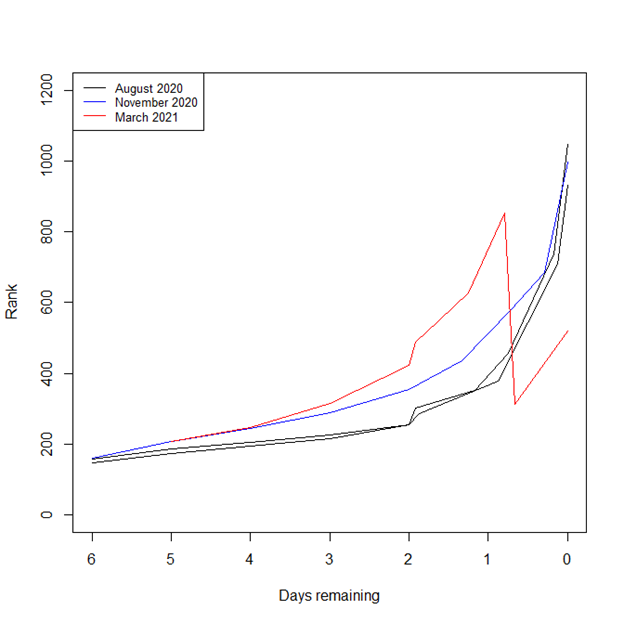 As you can see from the figure, the red line (March 2021) begins approximately collinearly with the blue line (November 2020). I did start tracking at exactly the same rank as I knew was safe for November (#209 five days before the end of the season for which the end of season rank in November 2020 was #997). However, it started to depart from the line at 4 days before the end of the season, reaching a point at 24 hours before season’s end where I was certain that my rank was no longer safe (#854, 19 hours before end). As such, I played for a bit and luckily got to #313 which was safe with a final rank of #519. Again, I made Day 2 in that qualifier which meant I did not have data for April. However, this seems to indicate that rank decay has again sped up, which may be an indicator of even more growth of competitive players who are vying for one of the 1200 qualifier slots.

Thus, as of now, I am no longer using the data that I had from November and older as basis for rank decay. In fact, it may be prudent to reduce my observational window from 6 days before season’s end to somewhere closer to 3 days. As of this moment, I am still confident that #400 or better is safe 24 hours before season’s end. Hopefully, I will be able to gather more data during this last week of the season to serve as basis for succeeding months.