Piotr Glogowski Wins Maybe the Most Stacked Top 8 in History 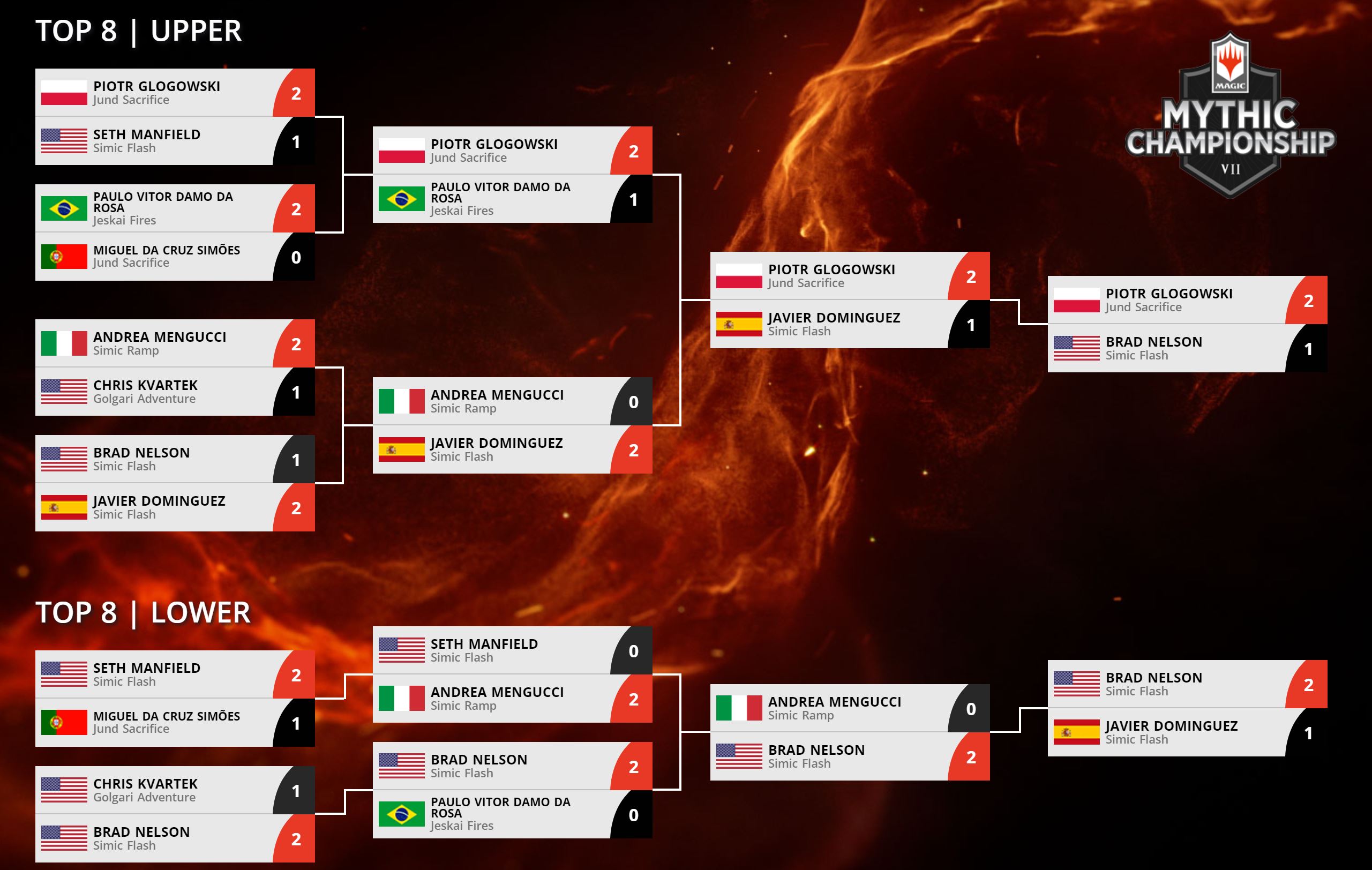 If you missed the top 8 of Mythic Championship VII yesterday, you missed some of the highest level Magic you will ever see. It seemed like every game one upped the last, with crucial decision making and exquisite turns providing electrifying moments.

First of all, the top 8 was absolutely stacked. Not only were 6 out of the 8 in the MPL (7/8 if you include Kvartek since he made the MPL for next year), but the MPL players that made it were all near the top of the MPL standings. In fact, as of the updated standings this morning, 6 out of the 7 top players in the MPL were all in the top 8 for this field. Additionally, the top 8 was particularly intriguing because of the Worlds situation, and allowed the championship game to have the additional stakes of being a play in match for that tournament.

The big story of the tournament has to be Simic Flash. This was a Seth Manfield brew, who convinced the power trio of himself, Javier Dominguez and Brad Nelson to play the deck last minute over Jeskai Fires. Any time a player comes up with a "rogue" deck, and then everybody who plays it makes the top 8, that is an unbelievable accomplishment. Although he didn't win the tournament, Seth Manfield definitely deserves a lot of credit for coming up with a format breaking deck.

However, although Simic Flash was clearly format breaking, Piotr Glogowski did not get the memo. On his way to an undeafeated tournament run, Kanister beat EVERY SINGLE Simic Flash player in the top 8 to bringing the trophy back to Poland with him. 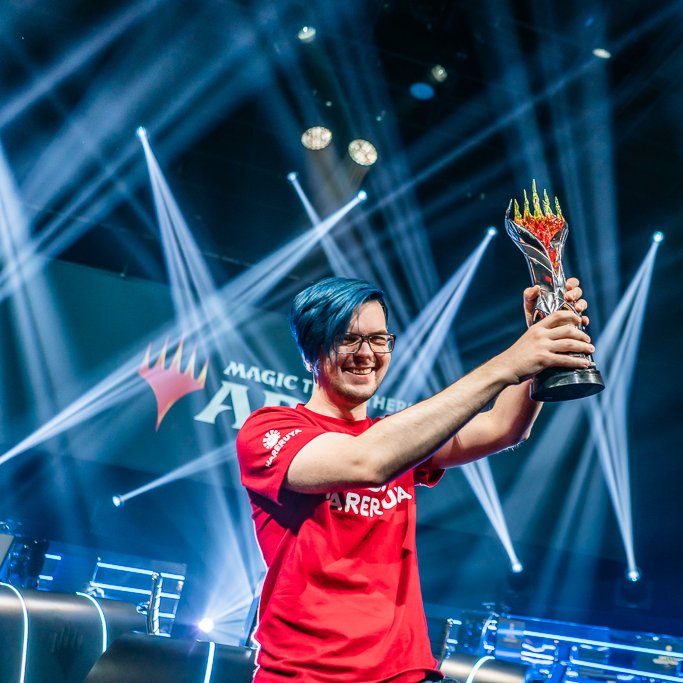 It started by taking down Seth Manfield himself in round 1 of the top 8. In game 1, Manfield was able to get a very early Nissa down, and took advantage of Kanister flooding pretty hard towards the end to pick up game 1. However, Kanister rallied back to win games 2 and 3, with Lovestruck Beast being a key defender to block some of the tempo creatures from Manfield. In game 3, neither player really got their engines going, but a few Cauldron Familiars and Lovestruck Beasts were enough to get home the 20 points of damage needed.

In the next round Kannister went up against PVDDR on Jeksai Fires, the most popular deck of the tournament. Jeskai Fires put up fairly solid numbers day 1 of the tourney, but only 1 of the 7 copies in day 2 made the top 8. This was probably because how bad the matchup was against Simic/Izzet flash, which put a lot of decks late into day 2. Regardless, PVDDR knew how bad of a matchup he had against the Simic Flash decks, so he realized he had to get past Kannister to give himself a realistic shot. Unfortunately, Kannister put that hope to rest, in what was an incredibly grindy and exciting matchup.

After two huge wins, Kanister only had to play Javier Dominguez, who many consider the best player in the world. Not only did he win, but there were a few moments in this game where Kannister flat out-played Javier. In game 2 he baited out a counter on duress which allowed him to get his cat/oven/Trail of Crumbs engine going to come back from just 1 land in hand, and in game 3 he seemed to always find the right line to get the victory.

In the championship against Brad Nelson, Kannister had to win his third game against his third Simic Flash player. Keep in mind that although Jund Sacrifice looks to be favored in the matchup, it is certainly not unwinnable for the Simic Decks. Seth Manfield beat Miguel Da Cruz Simoes on Jund Sacrifice in the consolation bracket, and Simic posted other wins against the deck during the tournament. After Brad picked up game 1, both competitors kept VERY slow hands in game 2. This was the boardstate a few turns into the action. 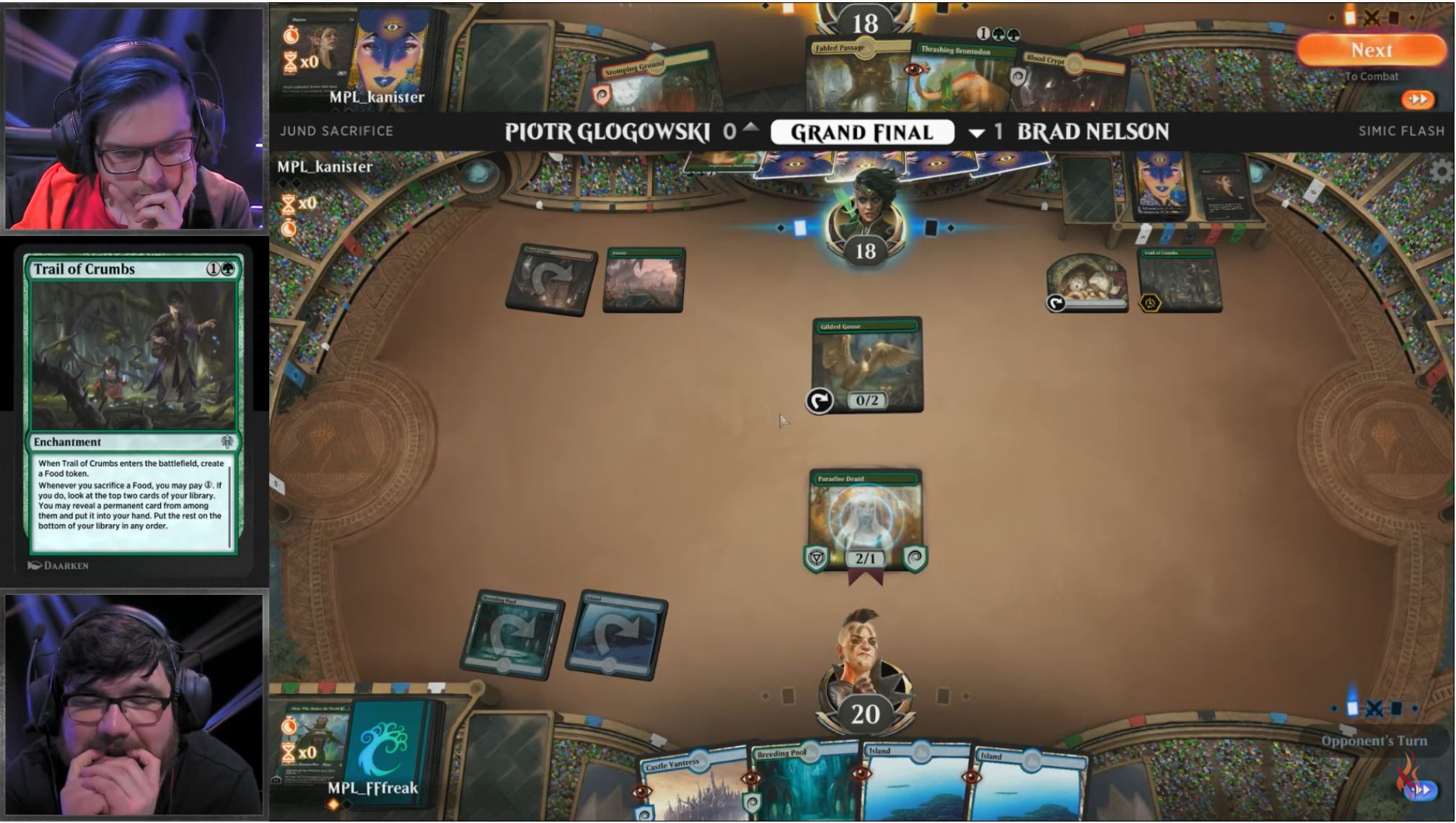 Usually when the Simic Decks have access to 3/4 mana and a few cards in hand this is extremely dangerous, however Kannister capitalized on a Duress to get the information Brad had nothing going on in hand, which meant Kannister's slower start all of a sudden looked a lot better. He managed to pick up the win in that game forcing a deciding game 3. In that deciding game, Kannister had an incredibly strong start, and won one of the less competitive matches we saw in the top 8 to wrap up a flawless tournament!

What an exciting way to wrap up a top 8, with around 70-100k people watching on Twitch at any given time during the final round. The coverage of the tournament was terrific, and for the first time in one of these Arena MC's I did not hear reports of any computers crashing mid game. Hopefully Magic continues this momentum into the 2020 competitive season, and I can not wait for World's which promises to be the biggest Magic tournament of all time!

Amonkhet Remastered is fast approaching! Here's what you need to know!

A surprise B&R announcement right after the Players Tour. Check out what changes await the metagame!

Mark Rosewater hosted a stream where he discusses Zendikar Rising! Check out what was discussed!

The monthly MTGA State of the Game has released. Come check out what August has in store for us!