With the initial release of MTGA Assistant back in January and its updates up until recently, we laid down what we want to look at as the baseline for an extension. We covered the three bases of deck tracking, draft helper and collection summary. Version 1.3 takes the next step, not only expanding on each of the three base functions but also expands on game functions and builds towards our vision of what we would like to see in the game itself with a ranked ladder and communities.

Here is the main website with more information: MtgaAssistant.net

If you already have MTGA Assistant installed, it will auto-update.

MTGA Assistant can be used without any form of account, just download and use. But we have now added an option to log in with your AetherHub account in the extension which opens up for a lot of possibilities that remain to be explored. But what we decided to add first is a Ranked ladder where all users that sync their AetherHub account will show up on. The ladder is split into Constructed and Limited and pulls your current ladder rank every time you finish a match. We are at the end of Season 14 right now, so sync your account to be part of our first seasonal ladder, which as of writing this only consists of two players at gold and bronze; the two AetherHub devs:

The ranked ladder can be viewed inside of the game with the extension, or on the AetherHub webpage under the Community Tab. 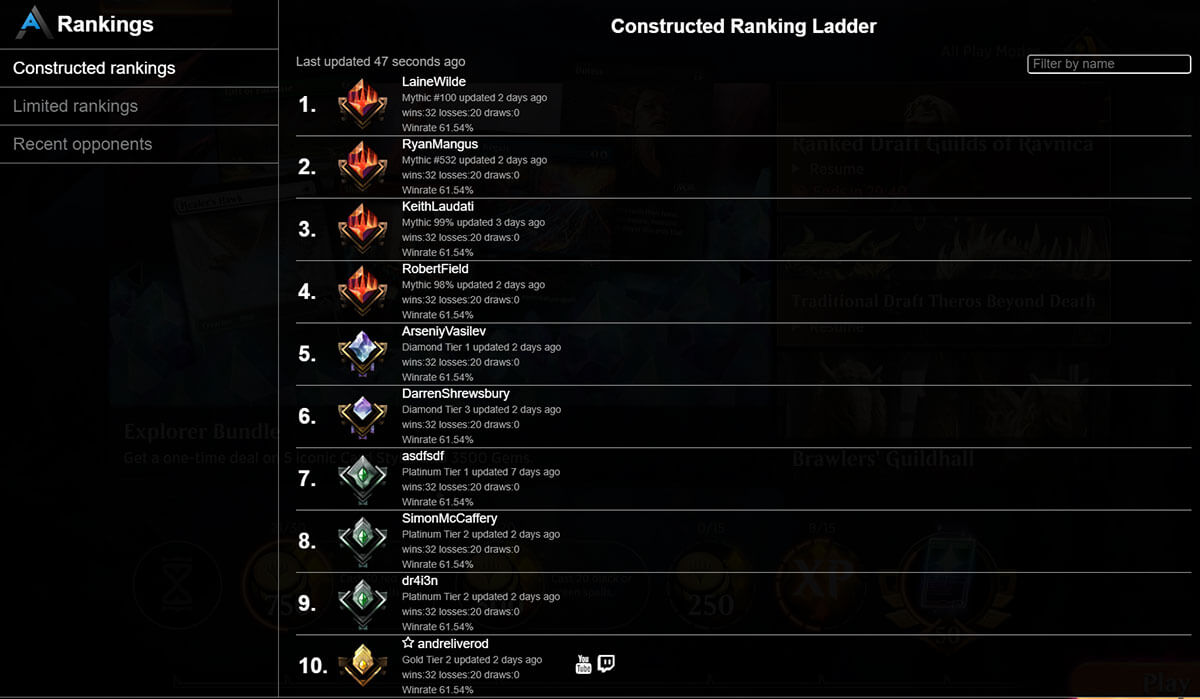 Disclaimer: This is all fake placeholder data, except for the guy in 10th place.

Climbing a ladder and competing against other players is fun. But what is more fun, is competing for prizes and climbing as a community with your Team. Season 15 (March) is right around the corner, during this time we will be doing some testing and surveying of the system and prepare for having prize support in April for the first top players to reach Mythic in Constructed and Limited and also a prize for the top players at the end of the season. Speedrunning is fun, and having a reason and bragging rights to be the first players to reach Mythic each season will give people a reason to climb other than a Mythic Qualification only reserved for a handful of people. As a player from day one of the closed Beta, I am very excited to add these features as this is something I feel have been missing from the game.

The social aspect of MTG Arena is quite lacking and we want to do something about that, so we will be introducing Community Teams in the coming weeks. This is already coded into the extension with version 1.3 that we are releasing but we are missing the backend and the administrative part on the AetherHub site. So at the start, it will be in a closed beta where we will be adding Team Aether members which you will be able to see on the ladder as they join and then we will be opening for others to create and manage their own Team and have others join them. There will be Team rank ladders where members can compare their rank to the other members. In the future, we are also looking into maybe doing some group chat or discord server integrations with the Teams to expand on the social aspects of the game. If you do not care about a global ladder you can still see your personal results under account statistics for each season, as well as your win rate. More to come on this page in later updates.

We have always wanted to get the feeling of walking into an LGS when logging into Arena, while we hope Wotc will implement more social aspects into the game, with our own extension we have the ability to expand into things like these.

The extension now logs all your drafts including each individual pick in every pack. You can access this information from the Stats & Tools tab and there is also a shortcut to this page when drafting so you can look at the card pool of earlier picks to determine what card might wheel. 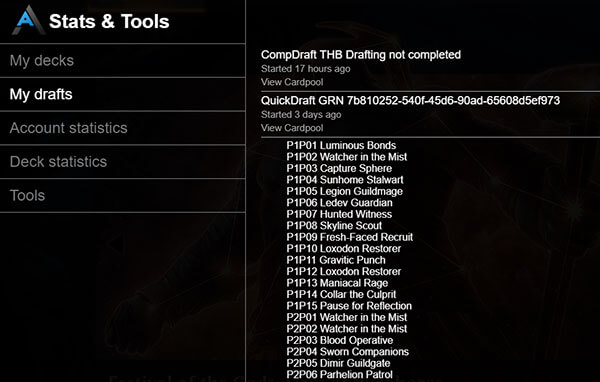 The picks interface consists of a visual display of all cards with the selected card outlined.

Version 1.3 includes several deck comparing functions, the first one found under the Collection page enables users to paste in any MTGA or text decklist it will tell you what cards you are missing to complete the deck. We also include an input where you can paste an AetherHub deck URL, this will fetch the deck and then compare it to your collection. But wait there is more... 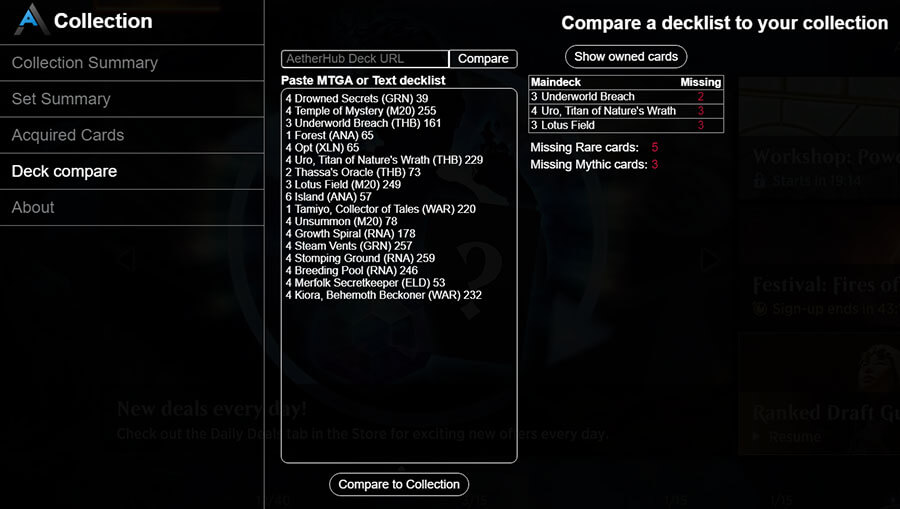 DeckHub Search engine + Collection compare has been integrated into the extension. You can now browse or search directly from within the extension, all of AetherHub's decks will now have a Compare tab on the website when you open the deck from within the extension. Found under the Meta page and User Decks you will find the same search engine that is located on the site, search there and it will bring up a browser window with the results, within the decks you will then see a new tab highlighted green where you can compare against your local collection.

We also give you a third way to compare, all decklists inside of the extension, Metagame summary lists, decks from recent events or content creators will all have a compare button when you hover them. With an easy click, you can see what cards you are missing from the meta decks posted on our site. We will begin work on collection deck data directly from the extension in the coming month to provide you with even more meta decks and information.

There are now more options on the deck tracker, we have added the chance to draw each color in the deck. More toggle buttons for showing and hiding options, a new slim mode that makes the list even more compact for you people who do not want to see mana icons, etc. and just want it to be as slim as possible. There is also a preview of the changes in the settings menu so you get a preview of the new layout. 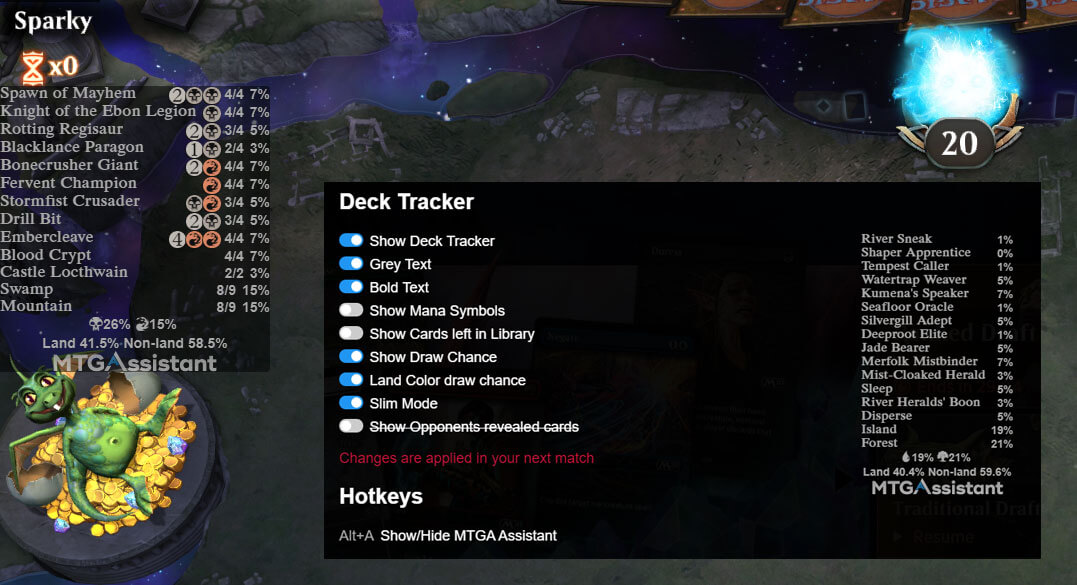 Drifter from MTGA Zone recently did a review for version 1.2, a really good in-depth article worth a read, we also implemented some of the suggestions he made! mtgazone.com/mtga-assistant-review