What is the MTG Arena Ranking system?

Every game competitive game needs a ladder to climb and MTG Arena divides its ranking system into two parts; The Limited and Constructed Rankings. Both of these rankings reset monthly and you get rewarded for how high you manage to climb. At the highest level, Mythic you have the chance of qualifying for the MTG Championship event the Mythic Invitational.

There are several modes in MTG Arena and only the ones that have the word "Ranked" are eligible for earning you rank progress. There are currently three ranked modes:

The rewards for reaching the different levels are the same for Constructed and Limited and you get rewards for both ladders since the ratings on them are individual. There is also a huge difference in how quickly you can ascend the rankings depending on the level, but first an overview of the level rewards. 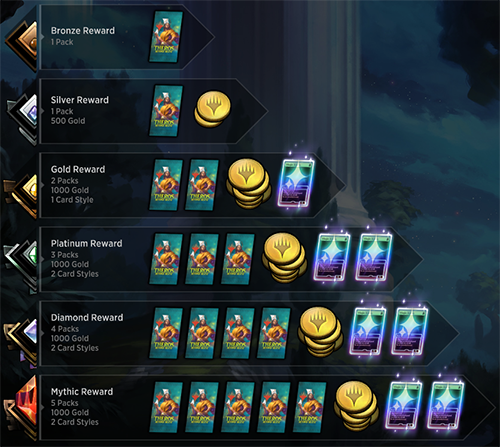 The higher you manage to climb the better reward, being in the upper levels of Mythic can net you an invitation to the Mythic Qualifier Weekend, which in turn can land you in the Mythic Championship. There is a difference in how easy it is to climb each level, in all ranks from Bronze to Diamond there are six slots that have to be filled up before you progress to the next tier and in Mythic, there is a different mechanic. 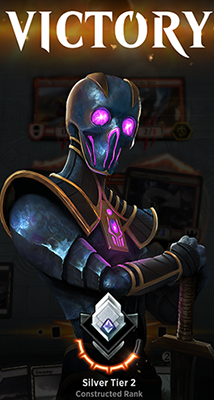 Each win rewards you with 2x times the progress to the next level and losing a match loses you only one bar progress. This makes it fairly easy to progress. If you are at the bottom of the tier and lose you will not drop down a tier, you can only gain progress.

On these ranks, a win gives you only one bar progress and losing will also lose you one bar. This means that progressing at these levels will require you to win more than you lose.

Reaching the highest level in the game a big grind and it is divided into two levels. Mythic Percentage and the top Mythic rankings. Now one of the hidden mechanisms in MTG Arena comes into play, something called an MMR (Match Making Rank). This is a hidden rating system based on the Glick Rating system which is similar to what is used in chess for rating player strength. Glicko is an improvement of the Elo rating system which you might have heard of. If you want more information on Glicko you can read more about version 1 and version 2 on these links.

In Mythic you will be paired against other players based on your MMR ranking, and the top players in Mythic will receive a placement number telling them what their placement on the ladder is. It is actually possible to share placement number with another player, this is all based on MMR ratings. The lower parts of the Mythic rank are the Mythic Percentages where you receive a Percentage number to tell you how close you are to the top Mythic ranks. For example, if you see 95% it means you are 5% away from reaching the Mythic leaderboard. In the start the top 1000 of Mythic players was would be shown on the Mythic leaderboard with their exact placement. This has since increased to 1200, then 1500, and will probably increase in the future too. Once you reach Mythic you will not go down to the Diamond Rank and you will stay there until season reset. 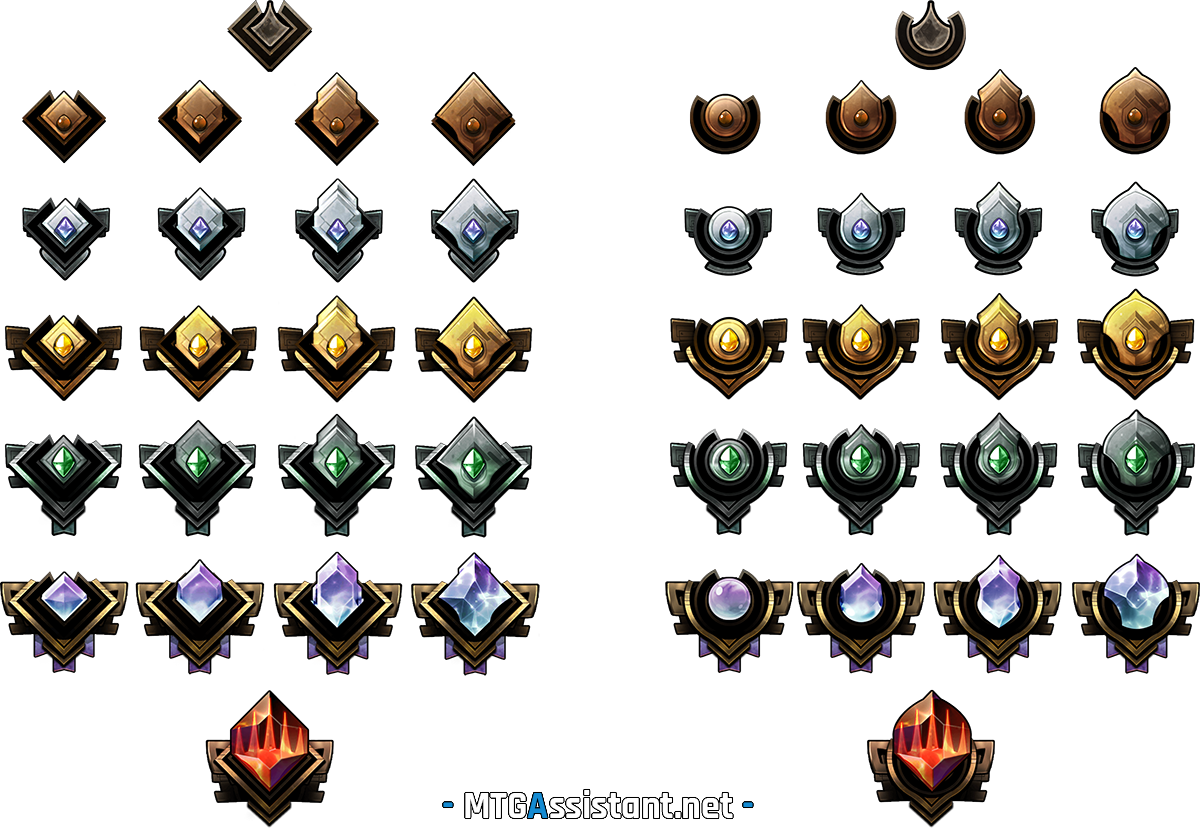 A complete list of all the ranking medals in the game, constructed to the left and limited to the right.

How to reach Mythic?

Reaching Mythic is not an easy task but we have some tips for you and also an estimate on how long it takes to reach the highest rank in MTG Arena. In Limited there is only one ranked mode which is Ranked Draft, so not many choices for you there, but in constructed there are two ranked ladder, Standard and Traditional Standard. Based on the information below, it is most effective to play Standard (BO1) from Bronze to Gold while from Gold and up to Mythic the most effective option is Traditional Standard(BO3).

Frank Karsten from Channel Fireball wrote this detailed article on how many games you need to reach Mythic. We have summarized some data in the tables to make it easier to read:

Amount of games required to rank from Gold to Mythic:

For all details check out his article and as Frank states: The numbers provided are expected values. Please keep in mind that the actual number of games that anyone needs can vary wildly. There is a lot of variances.

MTG Arena has the concept of ranked seasons where each season starts at the beginning of the month and resets at the end. You will lose ranking when this happens but you will not be reset to zero. The following table shows you what ranking you will be reset to based on what level you acquired during a season:

DonaldDuck313 15 Feb 2021 20:04
"On [gold, platinum and diamond] ranks, a win gives you only one bar progress and losing will also lose you one bar." That's not quite correct. That's true for platinum and (I assume) diamond, but gold gives you two bars for winning just like silver and bronze.