We have been improving the site over the last couple of months, here is an update summary of the biggest changes and improvements we have implemented since August. 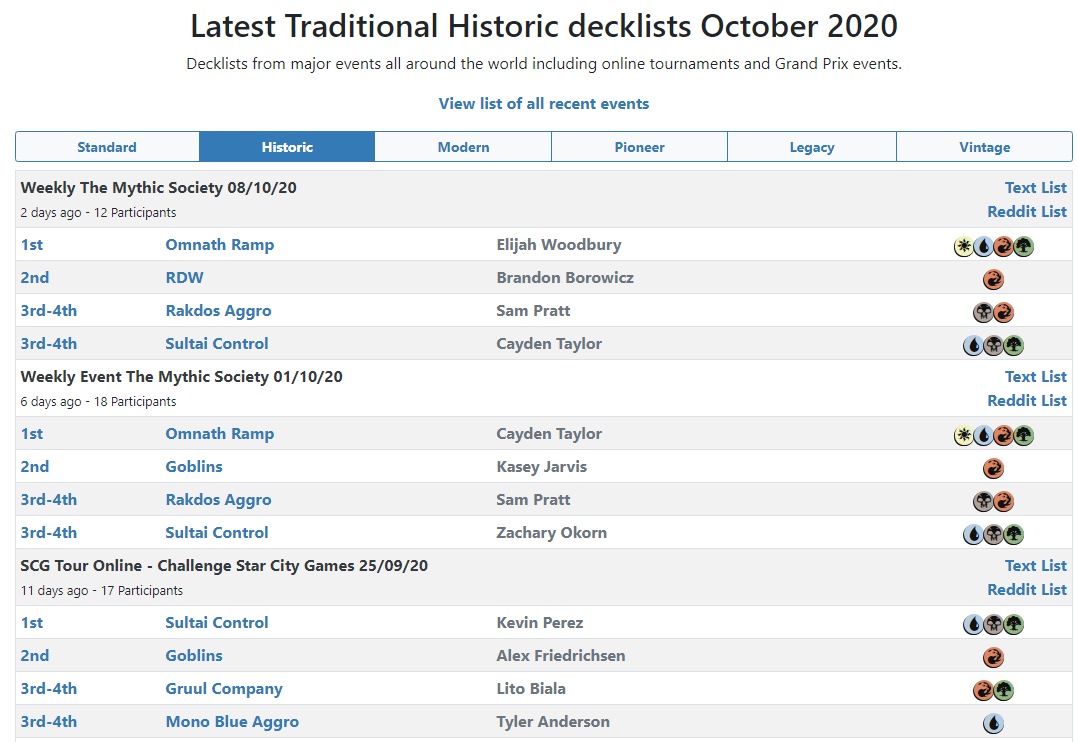 Historic is a popular growing format and tournaments have started popping up as it is now featured in Wotc large premium tournaments. So we have added support for it on our Event and Tournament page.

While we have pages for tournament results we figured it would be useful to see the metagame summary too making it easier to get a full overview of how the meta looks by adding sections of this to our Metagame pages.

This section displays decklists as they are procured from MTGA Assistant live. Before this was just the profile page of our bot, but we have now changed it to display useful information like win rates and wins/losses.

We now show and summarize more deck statistics on our metagame page with data from MTGA Assistant. The featured deck of each meta group is now the one with the highest win rate instead of the most recent posted deck.

We have improved our algorithm that gives names to our decks imported from MTGA Assistant and in addition to this figured out a way to manually override names with our own. This way we automatically rename similar new decks to make it easier for people to understand what type of deck is displayed on our meta pages.

As the users of our extensions have grown it became harder to find yourself on our Ladders. This is why we now have a search function!

We have had images hosted on CDN Platforms for a long time, but now we have refactored some code to move all our asset files to a cloud near you which should drastically improve site load times.

Having a lot of deck folders would cause the interface to look weird, this issue is now fixed.

Deck Editor Format Toggle
Added a button to toggle what card pool to use, available options: Standard / All.

Navigation is now easier on mobile phones with our new menu that now sticks to the top.

Hundreds of smaller fixes and tweaks

We are always tweaking, fixing, and improving things on AetherHub and of course keeping up with all new cards released and actively updating the database. Keep sending us feedback on what you would like to see next and if you find any bugs.