Hey what's up guys Jake here bringing you our first article on Aetherhub! We have a spicy brew here that we are going to be playing tomorrow at the Early Access Streamer event that Wizards has invited me to! We get to play on an account that has all the brand new cards on it, so I came up with Grixis Control list! So here is what we are working with.

So lets get into the deck! The combo for this deck is we are going to be casting copies of 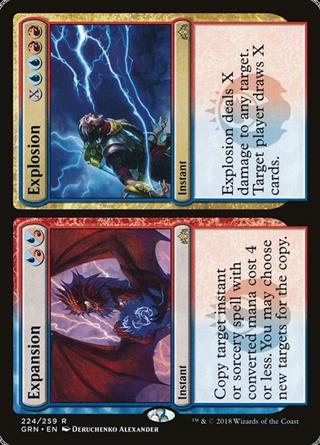 holding priority. The third step is to cast Expansion targeting our cheap spell and we are still keeping priority on that. Then the final step is to cast our copy of Expansion onto our own Expansion to copy the loop while Ral is pinging out opponent each time we cast our Expansion. Simple as that! But thats not the only thing that we can copy in the deck if we cant find our expansions. We can also copy our Enter the God-Eternals

. Doing that we would be draining our Opponent for 8 life while we are gaining 8, as well we are having them put 8 cards from thier libary into their graveyard and lastly we would be making an 8/8 Zombie Army creature which would be our finisher, so there are many ways for this deck to win!

. We are also throwing in Thief of Sanity

to have as an additional blocker if we need one as well as attacking in and grabbing cards that could be useful to us against them like another creature or a kill spell for one.

to get rid of Carnage Tyrant

or any other big creature that would cause us some problems. Also Thief of Sanity

would help us a lot by grabbing creatures to attack our opponent with as well. We are cutting down on the counter spells, so we can have hand disruption instead.

Against the Control matchup we are turning into more of a control deck than a Combo deck. We are putting in all of our hand disruption in as well as all of our counters. For what we are going to take out we are going to be cutting some of the kill spells we have in the list like Tyrant's Scorn

which isnt really needed for this match up at all. We are going to try and win with our Niv-Mizzet, Parun

and go from there!

We will be playing this deck tomorrow for the Early Access Streamer event! We also have a couple more decks lined up as well like a super spicy elf deck! I hope you guys would join me while we play this deck! I'll be on from 7:00pm PST to 12:00am PST.

infinite 23 Sep 2019 02:34
plz break ral in rotation...
Jake_MTG 24 Apr 2019 16:50
@Falklar That's true! I'm actually really liking the idea of the Thought Erasures! Thanks for the input! Once you try it out let me know how you like it!
Falklar 24 Apr 2019 07:59
Fair point, however for consistency's sake I think I would drop it from the main deck. While the cards has high ceiling I am afraid that it is a bad topdeck and a dead card in hand most of the time. Feels like a win more card, if you can win by playing that card you can probably win by comboing off with the 3 peace combo. At first glance I would either swap it with The Mirari Conjecture, or drop 2 syncopate, doublecast, and a shivan fire to add all tought erasures. Stoked to play this deck!
Jake_MTG 23 Apr 2019 23:44
@Falklar We have that in the main because our main focus for the first game is to go with the combo. Once we start breaking down the deck in the sideboard games we cut the weakest link and for me I think that's one of the weaker cards in the deck.
Falklar 23 Apr 2019 21:22
Why do you maindeck [[Doublecast]] if you swap it out in every matchup?