Zendikar Rising preview season is now afoot. Players are excited about what this set has to bring already. One of the things that people are excited about are these new Double-faced Modal lands. Let's talk about these lands and what their implications are for the game.

Note: I will be primarily discussing these card's implications in non-rotating formats, so please keep that in mind.

Double-Faced Modal Lands and How They Work

For the one with lands on both sides, when you play the card, you decide which face you will be playing. The land enters on that face and stays like that for the rest of the game, which means you only get access to that face's color. If you want to flip the land, you will need a card effect to flip it.

, they can take your modal land because, while in the hand, the card is considered a nonland.

Modal spells have always been good because these cards allow you choose what you want to do based on the situation. The poster child that showcases the flexibility of modal cards is Cryptic Command

; this is a Modern staple that allows players to adapt to the situation.

The Double-Faced dual lands are an amazing design. Players always want more untapped dual lands for competitive play and this is a fresh take and balanced take on it. The lands enter play untapped, but you need to decide which color you will need, not just for the turn you play it, but for the following turn. It reminds me of the choice players had to make with Attune with Aether

where you need to get the right basic (Yes, I know the energy decks from Kaladesh were busted), especially in the 4C Energy deck.

The Double-Faced nonland/land cards are also pretty interesting. The land side grants only one type of color and, on most of these, will come into play tapped. The nonland side does vary, but, judging by the cards that have already been previewed, are overcosted spells. These cards allow players to make a decision: do I need this land? If not, players can play the nonland side, even if it's not as efficient. Players will be able to lower their land counts in their decks if they use these cards correctly. Both sides of these cards are inefficient but give the player flexibility.

These cards are testing new design space, which is good. Wizards should be finding new ways to design new and interesting ways to play the game. Design like this I especially like; design that forces players to make small decisions that could impact the game.

Wizards does have a mixed track record when it comes to implementing new design space. Sometimes, they create something very busted, like Companions and the original Partner mechanic. Sometimes they miss and decide to never again try to push the design, like Splice and Devoid. And, even worse, sometimes they intentionally print cards that are toned down because they are worried about pushing the envelope, like most of the split cards in Ravnica and the Aftermath cards in Amonkhet.

Vehicles are probably the most recent busted mechanic (besides Companion) where we can see an overpowered mechanic that was too powerful on release. Smuggler's Copter

was swiftly banned in Standard after Aether Revolt came out and Wizards said that Vehicles were overpowered. As a result, Wizards stopped printing good Vehicles and instead printed weak Vehicles like Conqueror's Galleon // Conqueror's Foothold

in Ixalan and we have never seen a pushed Vehicle since. It's a real bummer, because the Design is really cool: throw some creatures into a Vehicle and it's off to the races. Vehicles was supposed to be a power-downed Equipment, which itself was seen as a problem as well. As a result, both Vehicles and Equipments will likely never get another card that is as strong as their heydays.

So, why did I go on a quick aside about busted mechanics? Well, here we have our final type of Modal Land. As of the printing of this article, only one has been spoiled, but this will likely be a full land cycle. 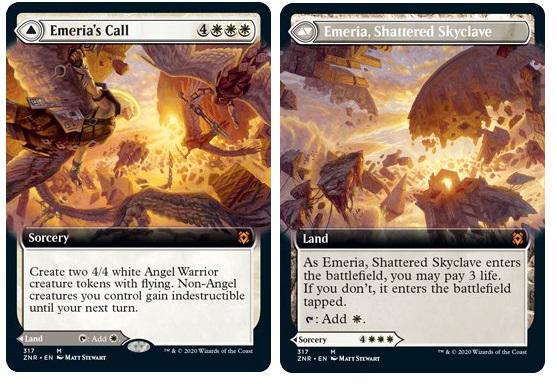 The mythic modal land cycle will likely have one nonland side and one land side. The key distinction between the mythic lands and the others is that the land side CAN enter the battlefield tapped. In this case, players need to pay 3 life to get the land untapped (time will tell if the other lands have the same requirement).

Let me get this off my chest first: this card is not very good. The nonland side of the card is a Sorcery that creates two 4/4 fliers and then gives your non-angels indestructible until your next turn. I can't imagine this seeing any play anywhere, not even as a Control finisher. It's too expensive and most of all, it's Sorcery speed. If this was an Instant, then I could definitely see it being good. If it gave ALL your creatures indestructible, then MAYBE it might see play in EDH. I have an Angel Tribal EDH deck and not even I would run this.

But, this is very troubling design. If, among the 5 mythic lands, Wizards prints just ONE good card, it's going to be in all of the decks that run that color. The choice of 3 life to ETB untapped is not really a choice; most players will pay it if they need the land. As a result, there isn't a real cost of slotting this into your decks. With the non-mythic lands, you were exchanging a land for a tapped land that could be a spell if you don't need it. Here, you are exchanging a land, for a land that you need to pay some life or a spell; the card is free. Heck, in Death Shadow decks, player would gladly bolt themselves.

And it's a real shame because modal lands with spells ARE a great design. There should be a cost associated with putting them in your deck. These mythic lands however, remove the cost and if there is a busted card among them, it will streamline deckbuilding for that particular color. And, furthermore, it could deter Wizards from trying to print playable modal land cards or they would just stop using this kind of design altogether. I just hope that the first set that has modal lands won't be the last set.

Intrepid_Tautog 27 Sep 2020 17:02
I'll admit, the power level on the spell-side of these is (for the most part) toned-down, but the opportunity cost is so darn low in commander that I think I'd still be fine swapping out a basic.