I've been playing MTGA since December of 2018. It's been a wild ride so far. Won $2k from the first Arena Open, got to Day 2 of the mythic qualifier several times, and did well in a number of MTGA-based, externally run tournaments like the CFB Pro Showdown (Won once, Top 8'd another) and the SCG Qualifier (Top 8'd once to get an invite to the Invitational in Roanoke this fall). Also, got accepted to the Content Creator program which let me have access to gem codes that I never actually use and just give away. A big part of all of this is figuring out how to maximize the MTGA economy which, as discussed in another article, is all about leveraging your playskill in limited and constructed. A by-product of this optimization is generating more gold than I use, leading to my gold reserves increasing as time passed by. Well, in this coming week, those reserves are going to hit a milestone. As of the time of this writing, I am at 990,150 gold. This week, I will exert some effort (via constructed events) to get that to a cool million. 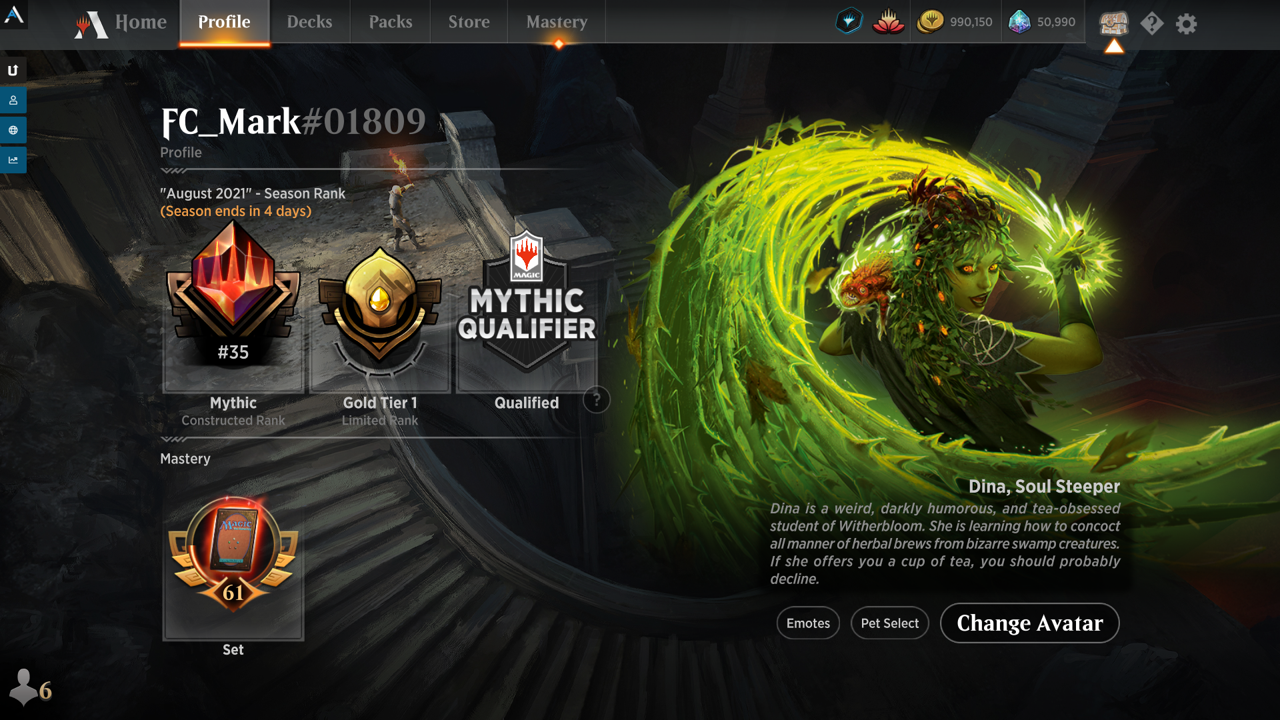 In celebration of this and also as sort of a parting wave to standard as we look forward to rotation, I will be giving away some gem codes and ICR codes courtesy of the Wizards Creator Program. I will be giving these codes away in two ways:

I will be streaming daily at around 7am EST starting Monday, Aug 23 on Twitch. Each day, I'll play constructed events until we get to 1 million gold. After we hit a million gold, I will drop two 1k gem codes and a bunch of ICR codes in the chat. This will be a free-for-all for people who are in the chat at the time and my only request is for the person who is able to claim the code to say so in order to make sure that the code did not go to waste.

Raffle in the comments

Another way to win is by simply being a follower and saying so in the comments section of this post. You can follow on Twitch, Youtube, Facebook, or Aetherhub (links to these are on my profile). Just leave a comment with the name tag you used to follow. You get one chance to win with each platform (so a total of 4 chances if you followed in each platform). I will give away one 1k gem code for every 10 participants up to a maximum of 5 codes (as those are the last ones I have left). Each participant can win any number of times (although note that each account is limited to redeem only up to 10 gem codes). Some of you already participated in a similar event like this, so all you need to do is copy-paste your entry there to this one.

That's it for now. Hopefully, when we do hit a million, we don't find out that it actually resets the counter to zero.

Well, that would actually be hilarious.

May the shuffler be with us all!