Bank of America Reports that Hasbro is Killing Magic: The Gathering

Bank of America (BofA) reported that Hasbro has now double-downgraded its stock valuation; from “buy” to “underperform”. The cause? Overprinting of Magic: The Gathering cards. In particular, releasing too many new sets in a very short time span.

The conclusion was made by several BofA equity analysts, among them Jason Haas and Sarah Park, who clearly pointed out the worsening situation for the company. “Hasbro is overproducing Magic cards which have propped up recent results” the report states, adding that it is “destroying the long-term value of the brand”. 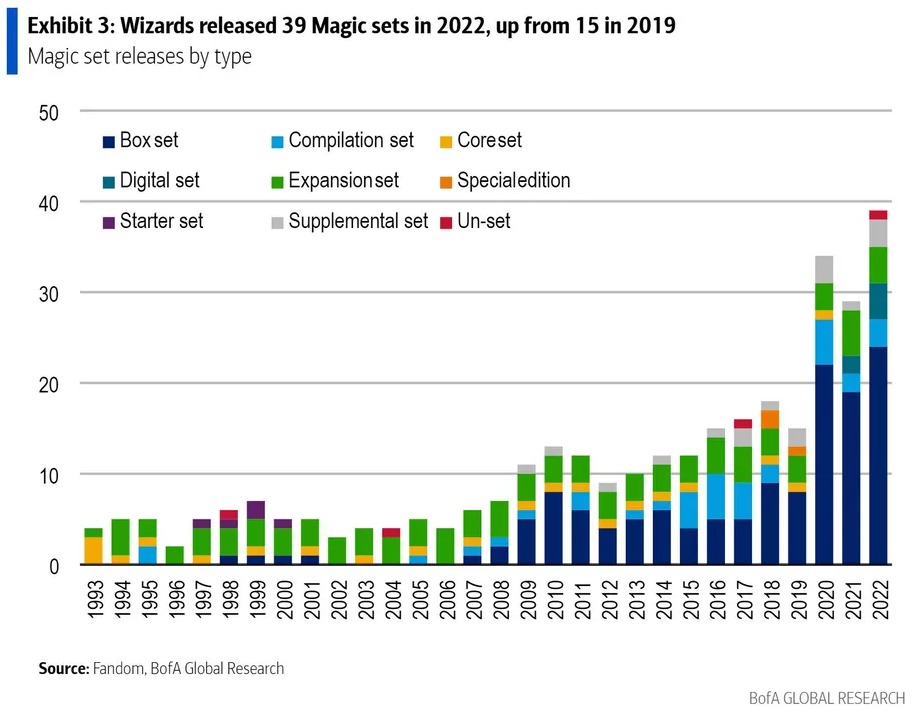 The increase in sets was directly attributed to Hasbro leveraging that sudden increase in sales at the start of the pandemic lockdowns, which worked in the short term. But now, with things returning to normal, BofA analysts are looking at a sharp end to that expected growth.

Of course, the economic effects of the devaluation on us regular MTG folk have been felt for quite a long time now. The analysts also spoke to players, collectors, distributors, and even to local shop owners, and many of them expressed the same frustration over the situation.

Worse, this purely profit-driven move creates two rippling effects on both sides of the competitive and casual community spheres. On the one hand, the rapid release of sets means more money invested in formats like Standard. But, on the other side, card value continues to decline since new sets feature many reprints, crashing the secondary collectors market.

Perhaps the most notorious representation of this downward spiral is the release of the Magic 30th Anniversary set. At $999, you roll the golden destiny gacha for a Black Lotus

; it is absolutely nowhere near the price of any regular four-pack set. It also effectively killed the Reserve List, and had collectors immediately scrambling to liquidate their assets before values completely plummeted to oblivion.

BofA warns that if this situation is not addressed immediately in the short-term, even long-time dedicated players would have to close shop. Unfortunately, looking at sneak previews of 2023 sets, Hasbro doesn’t seem to even understand the core principles of a TCG environment anymore.

Would Hasbro stop printing so many sets as soon as possible? Will the Reserved List be seriously upheld once again? Can the company stop die-hard collectors from turning to other TCGs instead?

Only time will tell.