We now have both BO1 and BO3 Standard decks!

Our Metagame pages now pull deck data directly from MTGA Assistant! This means that we now have deck metadata for Standard BO1, Standard BO3, and Historic! We look at how many matches each deck has played, what rank it is currently competing in and lastly the win rate of each deck, and then summarize the top-performing decks. We also collect decks that win events in both BO1 and BO3. You can see the winrate/event record if you click one of the decks.

There is a new User dedicated to this on AetherHub called MTGA-Assistant-Meta and keen observers have already noticed that this bot also has Brawl decks! This will replace the Brawl metagame section as soon as we have collected some more decks.

All the data we collect are anonymized, while they are collected from MTGA Assistant we do not collect any form of data that makes it possible for us to see what user the deck belongs to. We keep it anonymous to prevent abuse in the form of others being able to identify what deck someone is.

With and without prices and rarities

A small quality of life update to the Metapages, not everyone is interested in seeing deck prices or rarity data and prefer a more clean layout. So we added a show/hide toggle to the metagame overview.

Our front page has gone over many iterations over the years, improving it each time and now we have completed another overhaul. Our focus now has been to separate different types of content. There are four types of content on the site, articles, writeups, mtg videos and deck videos from content creators. Previously these have all been mashed together, but now we have two columns, one for articles and mtg videos, and another one for writeups and Deck videos. In addition to showing the latest video from content creators we now also show the other three latest videos from that content creator below. 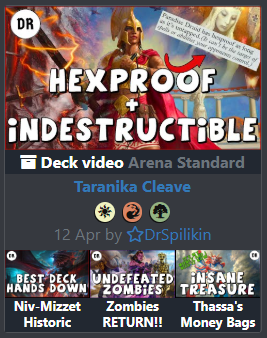 Video decks from Content creators are now grouped together

Some smaller User Interface adjustments have been done, we also fixed a bug in the collection system where importing a list of cards with wrong set names caused problems with updating quantities.

We are also looking for people who would like to do small MTG News articles for us, short pieces on what is going on in MTG, for example, small writeups about new mechanics in new sets, MTG Arena updates, events, information on Official Tournaments, basically short information pieces that can contain copy-pastes from official sources but also has some additional words from the author. It can also be a summary of the metagame right now or cover deck creations from Content creators. Our priority right now is finding people that keep themselves updated on MTG news and wouldn't mind writing a short summary of this and share on the site as a contractor for AetherHub. Long term we also want longer articles with more content but right now our priority is to cover the daily MTG news. We will write an article with more details on this but if this sounds interesting, get contact with Andreliverod#2458 on Discord or @andreliverod on Twitter.

We have updates for our extension too, as with AetherHub we have also added the new Metagame summaries inside of the Assistant so users now have access to the Standard BO1, Standard BO3, and Historic Metagame. The unique thing with MTGA Assistant is that you can see how many wildcards you are missing for each of the meta decks! In the list with all the different archetypes, we will tell you exactly how many you are missing together with the rarity level. 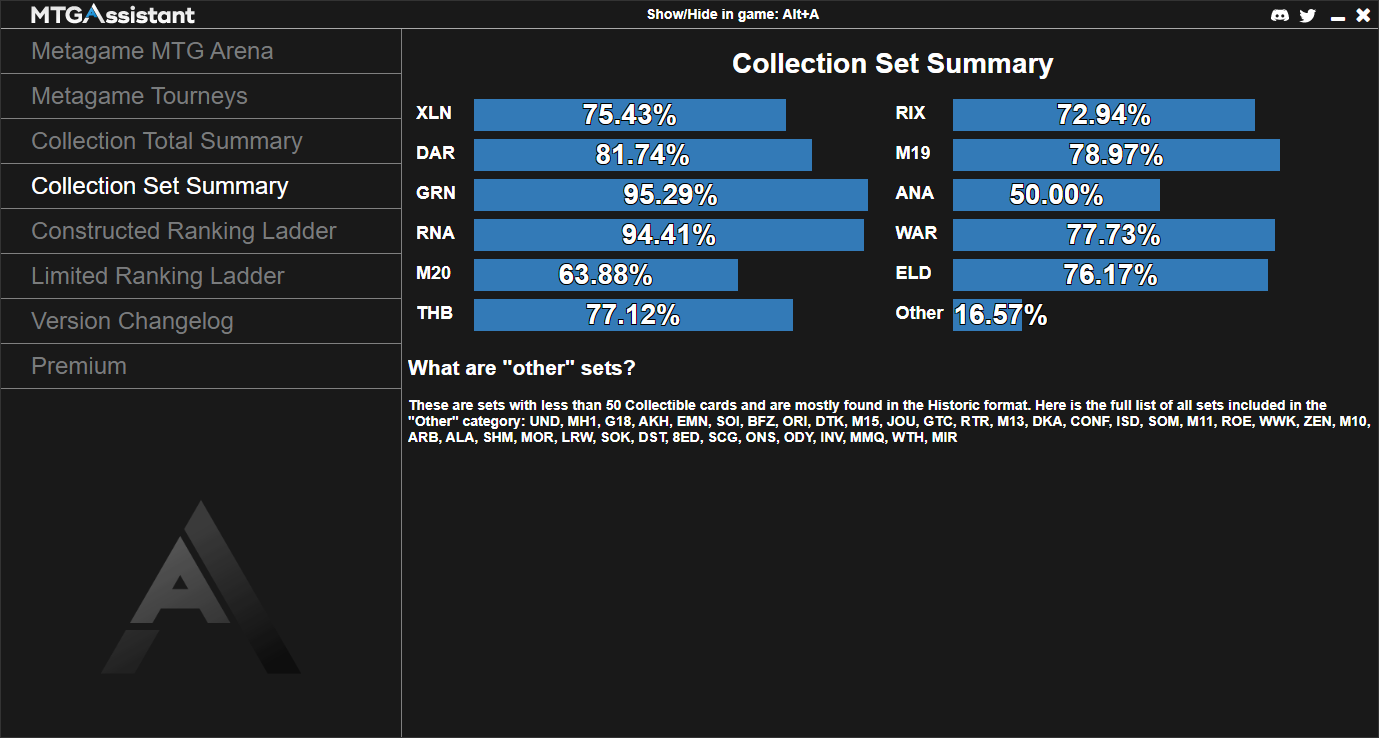 MTGA Assistant's desktop app has gotten a major upgrade. Earlier there was nothing to see here other than a message telling you to start the game which would cause the in-game app to load. We have started work on upgrading the Desktop app, starting with giving you the ability to see metagame summary and look at your collection inside of the app without having to start the game to access MTGA Assistant data! (You are required to start the game once though so the Assistant can access and store collection data. The ranking ladders are also available in the desktop app.

There was an issue with the Slim mode of our deck tracker, where having a long decklist caused misplaced scrollbar to appear. This was discovered by myself playing the free Brawl event since all of the decklists there are pretty long. This has now been fixed. If you wonder how to access this mode you do it under Settings, it makes the deck tracker super slim.