After looking over the list above, I decided to put a bit of a spin onto it (not much honestly) and take it for a test drive.  I was very pleasantly surprised to see how it played against the current 2021 meta (still very much up in the air, but still).

[[Blacklance Paragon]] - One of my additions to the list above.  I personally love the 3 points of lifegain that you get off of this guy.  It's not great that he misses flyers, but overall, it feels like a pretty strong play for a control deck in the early game (or to snipe a bigger scarier creature later on).

[[Gray Merchant of Asphodel]] - Gary comes in pretty clutch here, especially with the 3 devotion per Underworld Dreams in play.  He can save games for you.

[[Solemn Simulacrum]] - The sad robot comes back to help hit the land drops and keep creatures from pounding your face in for a turn.  The card draw is always nice too.  Very solid utility creature that I'm considering going to a 3-of.

[[Agonizing Remorse]] - I typically use this to throw someone off curve early game, but late game it has it's uses hitting their win cons as well.  I've seen multiple scoops early game from casting this and hitting ramp creatures/early threats.

[[Eliminate]] - I'm seeing far less Uro in the current 2021 meta, but I'm assuming that Sultai/Temur/Simic just haven't put the time into future proofing yet while they're tearing up the regular ladder (I'm guilty of this as well).  It may need an adjustment once things stabilize.

[[Grasp of Darkness]] - Useful for getting around puppers and Winota shenanigans, it also kills just about everything at 3 or less CMC dead.

[[Pestilent Haze]] - I'm hoping to see a strong black sweeper in Zendikar, but until then, this card helps a lot against hyper aggressive decks like RDW.  They can't hit you with Embercleave if their board is gone.

[[Grim Tutor]] - For when you absolutely need to either win the game or kill something dead.  It's janky, slow and feels pretty bad to cast in a lot of situations (especially going for removal since it'll usually be Rider which hurts you even more), but it can and will win you games.

[[Extinction Event]] - This functions a little bit differently from Pestilent Haze since you really want to hold onto it until you can hit at least 2 (preferably 3 or more) creatures on their board.  The exile is a nice bonus to turn off Escape, but as I said above, I REALLY hope that black gets a decent sweeper soon.

[[Peer Into the Abyss]] - One of the win-cons in the deck.  The triggers always bring a smile to my face.  You CAN hit yourself with it, but I really wouldn't recommend it.  Especially with Treacherous Blessing acting as additional gas.

[[Underworld Dreams]] - Wins the game for you with Peer, boosts Gary, and makes cycling cry.  I really like this card in the list.  It's a great play at almost any point in the game.

[[Treacherous Blessing]] - This is a great card if you're running out of gas, and the devotion boost helps with Gary a little bit too.  You PROBABLY don't want to cast it early unless you're up against something that's running over you, as the damage really adds up quickly.

[[Mazemind Tome]] - I'm on the record for loving this card.  It's great and really helps solidify control with the lifegain.

[[Ugin, the Spirit Dragon]] - Probably one of the best top end cards in the game currently.  I'm assuming he'll see heavy play until he rotates out next year.

I'm running 24 lands here, which seems a bit short, however with Solemn pulling lands for you and Tome Scrying them up, it's actually pretty consistent.  Triomes over Temples here for the Cycling, and Fabled Passage for thinning the deck.  Playing with a 57 card deck really helps consistency.

[[Kitesail Freebooter]] - One of my other favorite cards, he can come in for early game defense against flyers and to act as a removal magnet to keep your other (albeit a small number of) creatures from getting hit.  Stealing key cards early can also really cause your opponent a lot of fits.

[[Massacre Wurm]] - Comes in against aggro decks.  This deck has a decent amount of sustain, and he basically acts as an additional sweeper against builds like RDW.

[[Tymaret, Chosen from Death]] - Timmy is anti-graveyard tech.  His devotion and lifegain are also very nice bonuses for this list.

[[Eat to Extinction]] - Just a good all-around removal card.  It's expensive though, hence the 1-of.

[[Erebos's Intervention]] - Additional removal and lifegain.  Also good as graveyard hate, although I'd rather bring in Timmy or Crypt for that.

[[Peer into the Abyss]] - In the board to even out the combo a little bit if it comes down to game 3.

If you decide to try out the list, let me or TOTALmtg know how it plays for you! 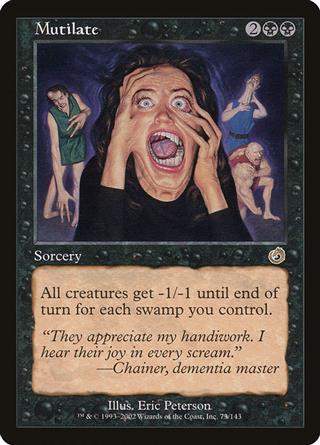