What's up Aetherhub Community! I'm back with another Rakdos Brew that has some real heat to it! Spicy! I've been wanting to play decks that were anti meta for as long as I've been learning the game. This deck has good match ups and some bad match ups like any other deck. Let me get right into the game plan!

We're playing a nice mix of removal spells consisting of 2x [[Bedevil]], 2x [[Eat to Extinction]], 3x [[Scorching Dragon fire]], and 3x [[Murderous Rider]] featuring the Swift End portion of the card. These spells cover a wide ground of threats starting with mono red...we all know about [[Anax, Hardened in the Forge]]. That card we despise, so we play the 3x [[Scorching Dragon Fire]] to remove it with no tokens being left behind. [[Eat to Extinction]] we play to remove pesky God's, Anax, Walkers, Questing Beast, etc. This is simply a clean answer and it is super easy to cast. [[Bedevil]] is used much like [[Eat to Extinction]], but the bonus of hitting artifacts. I cannot stand playing against [[Witch's Oven]] so we need an answer to it! The [[Murderous Rider]] is another nice removal piece that we can cast later as a creature to gain us back some life or chump block even. I forgot to mention, [[Bone crusher Giant]] can stomp out some early game threats or have added to reach to help us finish off our opponents. It fits nicely here as we can curve it into a nice attacker or blocker on turn three!

Very solid threats that can reoccur. I cannot stress it enough, casting a Krona or an Ox out of our graveyard when our opponent is low on resources or tapped out is phenomenal! The Ox really powers us on the card draw and helps fuel for Escape mechanics. I love Rankle here for some extra reach to attack our opponent's hand, board state, and help us refuel! That's also why I play [[Midnight Reaper]] to keep the gas tank full.

We have a walker suite that consists ts of 2x [[Davriel, Rogue Shadowmage]], 2x [[Chandra, Awakened Inferno]], and 1x [[Liliana, Dreadhorde General]]. Dav aka Daddy Darth Vader really is Pseudo gain life against an aggro deck all the while making them discard a card at least once. The late game reach potential to shock our opponent upon upkeep and limit their resources...against control/mid range decks...is staggering. This is a new addition to the deck as of late. The Chandra is red-hot in this deck! She bests aggro decks with board wipes, she answers walkers and tough creatures with her minus, she pings opponents upon upkeep when making an emblem (that easily gets out of hand for our opponent), and she has a tough body of loyalty when she comes down too! OH...and control... She can't be countered! Lastly, we play the 1x Lily because she is a card draw engine, she can make threats to apply pressure (snowball effect sometimes) and she has a nice removal ability as well. Making our opponent sac two creatures is huge against some decks. Key against [[Dream Trawler]] to get it off the table!

On to the sideboard we have 3x [[Plaguecrafter]] that can hit walkers and creatures, but we really use this card against UW Control for [[Dream Trawler]]. Next there's 2x [[Tymaret, Chosen from Death]] to help us gain life against aggro matchups and remove problematic escape cards from our oppponent's graveyard. 1x [[Erebos's Intervention]] does a lot of what Timmy does with gaining life, but it also is a great removal spell against strong creatures...God's included! A new card I've been testing a lot with here lately is 2x [[Chandra, Fire Artisan]]. She's a powerhouse engine for pseudo card draw via her plus ability, her ultimate helps us gain massaive card advantage in the mid to late game, and her passive does work too. Against control, if this card sticks it's pretty hard to remove. Even Temur Reclamation has to either bounce it (if they don't counter it) or it threatens to overwhelm them. We love this next piece...3x [[Cry of the Carnarium]]! GOOD BYE aggro. Sheesh this is sweet. Lastly, we're a black deck so we 100% of the time play [[Duress]] and this list plays the full play set.

I've had a lot of fun tuneing and playing this list. Leave a comment what you would try or what you think is good bad etc. I love all considerations and conversation about improving the list! Featuring [[Thought Distortion]] ,  [[Storm's Wrath]] , and [[Drill Bit]], I may test with these cards too! Thank you for reading and play on my Wizards. Shout out Dev for the inspiration on making decks I enjoy.

First Edit: I replaced 1x [[Duress]] with 1x [[Thought Distortion]] and I'm loving it. I don't see it often, but when I see it matters! I've destroyed U/W Control with this card 2/2 times when drawn. I took there hand on my turn six...they played [[Dream Trawler]] and I played [[Plaguecrafter]] and that was all she wrote!

I've yet to test against Temur Reclamation, but I have to think it wouldn't be a great matchup for us. I may, if I see enough of it, test [[Underworld Dreams]] in the sideboard against them bahahahahahahah. 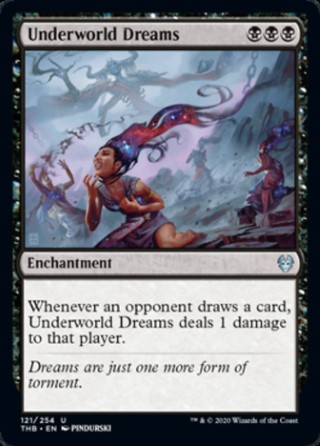