With the latest patch, it is starting to look like a complete game. We now have cosmetics that enables users to express themselves which is a big deal in Magic The Gathering. We know a lot about future functions too, but there is one last thing missing I want to address with this article.

MTG is more than just playing cards and slinging spells, there are many aspects to the game. We have the casual side of the game, people that play for fun with their friends at home, tournament grinders that play one of MTGs many formats, social groups focusing on multiplayer formats, people interested in the lore, art, finance, and trading. There are so many sides and flavors to Magic the Gathering and that is one of the things that makes it so great and why the game has survived for over 25 years. The game has something for everyone, people have gathered at their local game store for years, made friends, rivals and shared the game they love with other people. The social aspect of a game is crucial both for its longevity and for its growth.

We already know that the friendslist function is in the works and is probably one of the things releasing soon. Wotc has done a great job in integrating MTG Arena with external services like Discord, making it easier for its people to build a community around the game. Having a community and letting people be part of a group of like-minded people is important. Friends lists help with this and enable users to connect with each other, but it is mostly with people you already know. Integration with Discord is a useful way outside of the game for users to connect and add each other in the game, but the way to take the game to the next level is to integrate the social aspect within the game. Not many games address this issue, especially within the CCG world, but with MTG this is more of a natural thing because we already have that today, your local playgroup, your game store, and Tournament Teams are all social groups within the game. The goal with MTG Arena should be to introduce the same feeling you get when walking into your local game store, the feeling of meeting your friends and sitting down with other like-minded people and having fun.

This is nothing new, it already exists in a lot of games and comes in forms of Guilds, Clans, Teams, and they all serve the same purpose; Connecting people. Imagine a Team page in MTG Arena where your whole playgroup is members, or maybe you are part of a streamers community or maybe you and the local spikes have started a group to train together and give each other feedback. You have a group chat with other members in addition to the option to chat directly with your friends, there are scoreboards of the highest ranked members, achievement boards, maybe even introduce a thing we had in Magic Duels, community achievements. There are so many possibilities here that the dev team can expand on later, the important thing is to have the framework and basic functionality early in the game.

We have not heard Wizards talk a lot about this, even within the community there has not been a lot of talk about it. But I do believe that this is the one function that could push MTG Arena right up to the top of the card game throne. It seems that WotC got a good grip on the rest of the game, they have talked about introducing draft tables with friends and modes where you don't have to draft bots, friendslists, the community is constantly giving good feedback and we seem to be getting ready for a real release this fall. But pushing more on building community tools will be a big win and I really hope to see them announce something like this. It is understandable that it might not make it for the release of the game, but at least laying down the framework for it is really important if it is something to be explored in the future.

As an earlier Diablo III player and manager of one of the biggest Hardcore Guilds in Europe, The Hunters Association, a community gives a great social incentive to log in every day. You play some games, chat with people, try to climb the ranks and reach the top. It is a lot of fun and I really hope they implement this in MTGA too. For this to happen it has to be requested, so the next time you want to leave feedback to Wizards, tell them about Teams / Guilds. 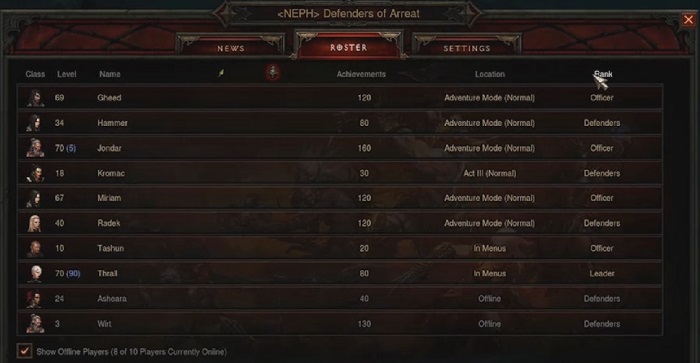 Faramir 18 Feb 2020 16:10
Fully agree. I love playing multi-player! MTG Arena is becoming the new standard for playing MTG. The recent Worlds Championship was played using Arena, and not the paper version. Because Arena is slowly taking over, new formats should be added. The format I would like the most is multi-player, games like two-headed giant, etc...
infinite 23 Sep 2019 03:26
i cannot wait for the next months updates....omg