Preview Season is in full swing! With the M21 set fully previewed, Wizards wasted no time and kept the ball rolling with the start of Jumpstart previews. You can read our previous article detailing Jumpstart here. Wizards, however, has announced that they will be replacing certain cards for the MTGA release.

Twenty cards from the upcoming release of Jumpstart will be a bit different for the set when it releases on Magic: The Gathering Arena. These cards will be replaced with other cards, some of which will also be new to MTG Arena! We'll share the details of what cards are going to replace them, as well as more on playing Jumpstart digitally, with the July State of the Game. In the meantime, we'll update this page with cards from the paper version that will not be appearing digitally.

Scourge of Nel Toth, Time to Feed, Fa'adiyah Seer, Read the Runes, Rhystic Study, Ajani's Chose, Angelic Arbiter, Draconic Roar, Mausoleum Turnkey and Scrounding Bandar were removed due to tight schedule under which set was developed by the Arena team.

Wizards likely wants to maintain control over their Historic metagame. It makes sense that Exhume and Reanimate will not be made available in MTGA as both cards are powerful enough to warrant play in Legacy and the cards will power creep Unburial Rites

, which was just released as part of Historic Anthology III.

Ball Lightning, Chain Lightning, and Lightning Bolt all are likely due to the fact that they will enpower Burn decks to a dangerous degree, so I can understand why Wizards would not want these in Historic. I expect these cards to be replaced with Lightning Strike

We can expect Wizards to replace these cards with similar cards since the cards that will replace them should still fit the theme of the Jumpstart pack they are in. Exhume and Reanimate will likely be replaced with weaker versions of the cards and Time to Feed should be replaced with another Fight spell.

This list will expand as more cards as revealed, but we should be on the lookout for new and exciting cards to enter Historic!

I hope you are all pumped about Preview season continuing. I, for one, am excited for Tinybones, which I'll put below for your convinience. What cards do you think will replace these cards? 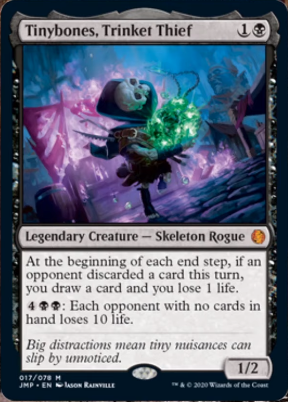