Jeweled Lotus has been a hot topic since it was previewed this week. Let's jump into it right away! 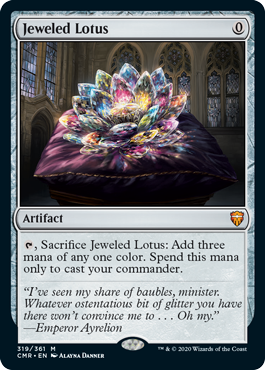 Jeweled Lotus is a 0-cost Artifact. You may tap it and sacrifice it to add three mana of any one color and you can only spend this mana to cast your commander. It is available at Mythic rarity in the upcoming Commander Legends set.

Why Is There Outrage About This Card?

At a glance, this is just Black Lotus, but can only be used to cast your commander. There have been "variations" of Black Lotus in the past, with cards copying the free mana aspect like Lotus Petal

, and other cards adding additional costs whether it be sacrificing things like Lotus Field

. Just for that reason alone, the community was pretty sure this was going to be a good card. Lotus Field

was played in the Lotus Breach deck in Pioneer that was eventually banned out; Lotus Bloom

There are three reasons, all related to each other, why players are angry about this card. First, players believe this card is amazingly powerful. Being able to play your 3 or 4 CMC commander on turn 1 will propel you so far ahead of the table and will lead to a lot of non games. And if you also have Sol Ring

Second, because of the apparent power of the card, every deck is going to want to play this. It homogenizes deck building. For example, instead of having to build a 99-card deck, players will only have to build a 98-card deck since every deck will want this. Sol Ring

are 3 such cards that should be run in every deck no matter what, so players are already building 96-card decks (Actually mono color decks may not even want Command Tower, but who plays mono color decks, am I right? [I do]).

Finally, since every deck wants to play this, everyone will want to buy this card. Jeweled Lotus is a Mythic in a non-Standard set, so there will not be as many copies floating around. Since everyone will want this, demand will likely far exceed supply for this card and hence, this card will become very expensive. Now, we have a format staple that will be priced out of most players' budgets.

These are three key reasons why players are angry about this card. There is an additional reason which is just frustration at Wizard's constant power-creeping of Magic, but I don't think we should discuss that when we are just talking about this single card.

Commander is a Multi-player Format, NOT a 1v1 Format

Commander card evaluation is a lot harder because it is a multi-player format. Players are drawing comparisons between Jeweled Lotus and Black Lotus

because Black Lotus propels you so far ahead in a 1v1 format. Players have seen the problems of fast and free mana in Standard over the past year with multiple bannings such as Once Upon a Time

and it really is fresh on their minds.

One member of my playgroup puts it quite well: I don’t think people realize that in Commander, a card's value is literally cut in half if it’s not affecting every player. Cards like this aren’t nearly as bad as things like Rhystic Study

. And those cards aren’t even bad; they’re just super efficient. A card being actively bad for commander needs to be oppressive for the whole table. But if it’s just affecting you and your board state it’s nowhere near banworthy. The person who is ahead at the start needs three people to not have answers in order to win. That seems like bad odds.

This is the reason why board wipes are favored over single target removal (except in high power tables); it's because they affect all players, not just one. Jeweled Lotus advances your game plan and only one time, but it doesn't actively stop other player's game plans. As a result, all your opponents need is to find one answer between the three of them, and they already have 2-for-1'd you because you spent an additional card to turbo out your Commander.

Also, in order for Jeweled Lotus to even be good, you need to either have it in your opening hand or draw it on turn 1 or turn 2. Past turn 3, this card is a dead card and you'd rather would have a mana rock you can use every turn rather than a card that can only be used once.

Here's one more example comparing Commander and 1v1. I am an avid 8-Rack player in Modern and people who have played it knows how bad it feels to play against it. The deck involves forcing your opponent to discard their hand and then having them lose life thanks to The Rack

. It's a great 1v1 strategy because it's very easy to force just one opponent to empty their hand. However, this strategy, until recently thanks to Tinybones, Trinket Thief

, doesn't really work in Commander. First off, most of the Discard commanders, until recently, only target one player. The Rack

itself only targets one player. And it's very difficult to make all of your opponents be hellbent instead of just one.

In order for a strategy to be effective, you need to be able to efficiently deal with all of your opponents at the same time and Jeweled Lotus

being a one-shot ritual that can only be used for one thing is not very good at that.

Jeweled Lotus Isn't Even Good For Most Commanders

Another part of Jeweled Lotus

that is vastly overlooked is the fact that it makes three mana of ONE color. This means, on turn 1, you can only play a commander that is 2 colors. Forget 3 or 4-color commanders; you won't be able to turob them out earlier. Atraxa, Praetors' Voice

, one of the most popular commanders, won't even be able to be turbo'd out and only comes down one turn earlier. If you had used an Arcane Signet

, or any of the available Signets, you probably would've been better off since that Signet is sticking around.

or Kenrith, the Returned King

, but those only work because they don't have the colors in their actual casting cost.

Even then, Jeweled Lotus is really only good for Commanders that are 3-4 CMC. Anything lower doesn't really benefit, like Hapatar, Vizier of Poisons, and anything higher, mana rocks would be much more efficient. For my personal decks, the only deck that would want this is Teysa, Orzhov Scion

and even for that deck, I'd be wary since I still need to set up everything afterwards and I'm nowhere near running away with the game. My Lyra Dawnbringer

deck doesn't really want this since I'd rather have rocks and a 5/5 Flying Lifelinker isn't really a problem; I need 4 turns to win with Commander damage. Arahbo, Roar of the World

, it's just not possible thanks to the same problem as Atraxa.

, but some cards just work better with others. That's just card synergy and some cards will be inherently more powerful when played alongside others.

There really is a narrow range of commanders that Jeweled Lotus would really be good with and after turn 3 or 4, Jeweled Lotus just ends up being a card you wouldn't really want to see in most decks.

If Jeweled Lotus Ends Up Being Expensive, It Will Because It Has Lotus In the Name

We've disected the reasons why Jeweled Lotus is not that powerful of a card nor is it as ubiquitous as players think it will be. But, it is true that it's a Mythic in a non-Standard product, so there will be less copies of it around and make it more vulnerable to a price swing.

There are certain cards that command a premium thanks to nostalgia and throwbacks. Mox Amber

sold at a very high price point before it was released because it had Mox in the name and it ended up not seeing much play and it dropped. It saw play in Pioneer, which caused it's price to shoot up, but after all the bannings, it doesn't see any play, but still holds it's $20-ish price tag thanks to price memory.

I imagine Jeweled Lotus will see an effect like this too. It will likely drop on release as players realize it's not as good as they thought it was, but it will still command a decent price tag since it is a Mythic and it has Lotus in the name and players will always be trying to do something with the card. It definitely will not be because every deck will want it or it's power level.

I hope this article helps players realize that Jeweled Lotus isn't as strong as players think it will be. It will be a fun card and played in certain decks, but outside of that, you don't need to run out and buy it. Playing your commander turn 1 will be fun and there will be some games where your opponents can't answer your commander. But I suspect, more often that not, players will power out their commanders only to be met with removal the following turn. Let me know your thoughts in the comments!

Bunniebuns 24 Nov 2020 05:52
I literally only want this card for my jank no land deck, and I cant get my hands on it because they are so expensive or everyone traded it away. I don't understand why everyone wants this card and its frustrating