I used my own version of the Temur NeoStorm deck to succesfully climb the Historic Bo1 Ranks from Platinum to Mythic less than 100 games total with a phenomenal 71% winrate during the October 2020 season.
The deck is under constant development and I made some changes to the removal suite during the November 2020 season in which I got to Mythic again within 100 games.

I decided to splash black for [[Wishclaw Talisman]] to reliably fetch the combo by turn 4 and often enough even with extra mana to safely fetch only on the turn I combo off without granting the opponents a wish themselves.
The splash is actually quite easy to achieve as all I needed to do is replace the 8 shock lands in Temur colors with those of Sultai colors. So I'm basically only replacing red with black. In order to still have red mana avaiable if needed I run the full playset of both Pathways and 8 mana dorks.

The [[Wishclaw Talisman]] also allows you to fetch [[Pact of Negation]] to protect the combo or [[Into the Roil]] to deal with annoying creatures like [[Hushbringer]] or artifacts like [[Grafdigger's Cage]] end of turn or just in genral to buy some time bouncing the opponents good stuff while possibly also drawing a card. You just have to be careful to not give your opponent an opportunity to replay them or getting multiples of those on the battlefield when handing the [[Wishclaw Talisman]] over to them.

An argument can be made to run a different split of [[Pact of Negation]] and [[Into the Roil]] or even replace the later with [[Abrade]]. However considering the manabase in this version of the deck and "hate" artifacts not being that common in Bo1, I prefer [[Into the Roil]] which also has the upside of dealing with enchantments. I prefer the 2-2 split because this gives you the best chances of drawing both cards naturally or with [[Shimmer of Possibility]]. It is also possible to use [[Opt]] instead for more card draw but the [[Wishclaw Talisman]] is such a powerful fetch engine that I don't feel the need for it in this deck.
You can find all those cards I tested or used in previous versions of the deck in the Maybeboard.

Click the link for some pictures showing the stats of my climb from Platinum 4 to Mythic and the final end of season stats and rankings.
I finished the season on Mythic Rank #575 after I stopped playing once I peaked at #488 with only a couple of hours left. The deck also got featured in the Historic deck section on MTG Arena Zone.
I managed to repeat my success with this deck in the November 2020 season reaching Mythic #19 on day 4 in exactly 100 games with a 71% winrate and another feature on MTG Arena Zone.

There are 3 ways to start the combo:

This is the easiest way to start the combo and usually what you aim for when fetching cards. It can happen on turn 4 from an empty board but you can go off even earlier if you have mana dorks in play.

You need G U RR X

This method is generally inferior to the other two because it is slower (requires more mana) and is the only one that needs red mana.
However it can happen when you don't draw the [[Sea Gate Stormcaller]] but have a [[Dualcaster Mage]] in hand and [[Paradise Druid]] in play.
It might also be your only way to start the combo if you were forced to mill a lot of cards and don't have enough [[Dualcaster Mage]] / [[Glasspool Mimic]] left in the deck to kill your opponent.
Lastly it can be used in the mirror match flashing in the [[Dualcaster Mage]] on your opponent's last Neoform trigger when they try to combo on their turn. With a bit of luck you can fetch more creatures than they have, block enough to avoid dying and then swing back for lethal on the return.

You want at least 1 combo piece ([[Neoform]] is better than [[Sea Gate Stormcaller]]), 1 cantrip ([[Wishclaw Talisman]] or [[Shimmer of Possibility]]) and 2 lands (with the matching colors for the cantrip) in your opening hand. It's okay to mulligan down to 5 or even 4 cards if you have to. Also mulligan every hand that includes both copies of [[Tuktuk Rubblefort]] or [[Combat Celebrant]]. And keep in mind that a mana dork is worthless if you don't have the green mana to actually cast it.

Against an opponent with counter spells you need to draw another land (or [[Pact of Negation]]) and alternate your turn 3.

Be careful with your lands and how you play them out. You only need 1 land producing green mana. Once you have that [[Cragcrown Pathway]] should be played as red land, although you will never need more than 2 red mana in one turn either. [[Riverglide Pathway]] is usually played as blue land because you need multiple blue mana sources for your combo and the cantrips. If you don't need the mana immediately avoid shocking yourself but it's almost always the right play to shock if that means you can play the cantrip or mana dork that turn.

When you have the choice of playing a mana dork or a cantrip it is usually better to play the mana dork first because it potentially allows you to go off a turn sooner if you draw your combo normally.

Don't be afraid to tap the [[Paradise Druid]] on your turn if you have no other way to generate black mana for the [[Wishclaw Talisman]]. You are likely to find more lands anyway and being able to fetch what you need is worth much more than having the mana dork.

If you know your opponent runs hand disruption or counter spells it is usually better to wait until you have enough mana to fetch the missing combo piece or a [[Pact of Negation]] on the turn you want to go off. Don't fetch early if your opponent is in blue or black and could fetch something themself to disrupt your combo. You also have to be mindful about burn spells that could take our your [[Sea Gate Stormcaller]] before you can sacrifice it to [[Neoform]].

This version of Temur NeoStorm has a hard time beating decks that prevent you from searching the library or exile non-token creatures who enter the battlefield without being cast. But this is a risk worth taking in order to find the combo earlier and combo off on turn 3-5 almost every game.
There are only 2 copies of [[Into the Roil]] in the deck to deal with [[Grafdigger's Cage]], [[Hushbringer]] or [[Yasharn, Implacable Earth]] but you need to time the bounce at the end of your opponents turn to not give them an opportunity to replay those before you combo off. A flashed in [[Containment Priest]] is usually game over as well unless you have [[Pact of Negation]] in hand.
Luckily in Bo1 neither of those hate card is extremly popular with [[Hushbringer]] being the most common one you'll see. I also found out that running the shock lands in Sultai colors instead of Temur disguises our combo deck a little bit and many opponents do not know what kind of deck they are facing until it is too late.

I don't think this version of NeoStorm can be adapted into Bo3 because it loses the surprise factor and the 4th color is too much of a burden. Artefact removal is present in sideboards and ruins the [[Wishclaw Talisman]] fetch plan. [[Grafdigger's Cage]] is also very common in sideboards which then forces us make more room for artefact removal ourselves. As a result of this the shocklands with swamps need to be replaced with mountains and those alone are just too many cards to fit into a viable sideboard.
I have to admit that I didn't really try either because I actually enjoy playing Bo1 more anyway.

This turned out to be much more detailed than I initially intended so thank you for reading all of it.
I hope you enjoy the deck and have as much success playing it as I had climbing the Rankings. 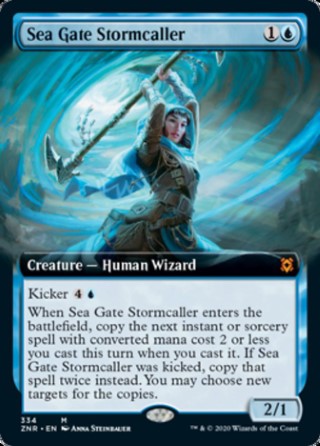