This is a deck that tries to ramp with artifacts to get ahead and control the board with board clears. ie: [[Merciless Eviction]] [[Terminus]] [[Toxic Deluge]] [[Supreme Verdict]]. You are going to go mainly for combo kills using: [[Sensei's Divining Top]] [[Bolas's Citadel]] [[Aetherflux Reservoir]] Here you will use Bolas's citadel to cast Sensei's Divining Top for one life. (It helps get lands out of the way, or cards you do not want). With Aetherflux reservoir out, you are gaining 1 life for each spell you have already cast. Bolas's Citadel lets you cast the top spell for life equal to its cmc. So you loop Sensei's Divining Top until you gain enough life from Aetherflux Reservoir to Pay 50 life: Do 50 damage to target creature or player. In the end, PHOTON CANNON to the faces!

Another loop is: [[Sword of the Meek]] being sacrificed to [[Thopter Foundry]]. This will create a 1/1 blue flying thopter and then bring back the Sword from the graveyard onto the most recent 1/1 blue flying thopter. You can use this as a wall of defenders, or to net card advantage with [[Oloro, Ageless Ascetic]] to draw cards and drain opponents. The combo piece is putting the sword out with foundry and [[Krark-Clan Ironworks]]. You sacrifice the one thopter to this Krark-Clan to gain 2 colorless, then use 1 to sacrifice the sword and get back a thopter. The 1/1 blue flying thopter created from the [[Thopter Foundry]] triggers [[Sword of the Meek]] to come back into play on it. Allowing you to each time, generate a +1 in colorless mana. This will create you inifinite mana that is colorless and as mana 1/1 blue flying thopters as you would like. The thopter foundry also gains you 1 life each time. So you can gain as much life as you would like as well. If you commander is out, each time you gain life you could pay (1) to drain each opponent for 1 life and draw a card. Depending on each of you opponents' life totals and the number of cards you have left in your deck... you could kill them off that turn with these cards together. If you do not have your commander out, but you have [[Sword of the Meek]] [[Thopter Foundry]] and [[Krark-Clan Ironwork]] out and you use the combo to generate inifinte mana (you have to declare an amount technically... so we can say 1,000,000), you can cast [[Walking Ballista]] for (X)(X) = (500,000)(500,000). Making it a 0/0 that enters with 500,000 +1/+1 counters. Then you can remove a counter to do 1 damage to any target! (In other words, killing each opponent)

Another "combo" is: [[Helm of Obedience]] with [[Rest in Peace]]  or [[Leyline of the Void]]. When you pay (1) into helm and target an opponent while either enchantment is out... it will try to follow milling until you hit 1. But because the cards go into exile, it continues to try to mill the opponent's deck until it runs out of cards from their deck to place in it. The effect stops and the opponent's deck has been exiled, because it tried to mill and was exiled with either of the enchantments being out. The helm does not sacrifice its self because it couldn't complete the effect and will be ready to use against another opponent when it is untapped.

Another "combo" is to cast [[Approach of the Second Sun]]. Then before you get to cast it a 2nd time, get [[Teferi, Time Raveler]] out or have 1 of the free counterspells. Then, before your next turn or before you draw again, use [[Mystical tutor]] or [[Vampiric tutor]] to set up the top of your deck with [[Approach of the Second Sun]]. Then while Teferi is out, opponents can not respond to you cast, and you will win the game on Approach of the Second Sun's 2nd cast. You can also cast this using [[Sensei's Divining top]] with [[Bolas's Citadel]] to get through the deck. Since [[Bolas's Citadel]] lets you look at the top card, if you lost your Sensei's you can use [[Necropetence]] to manipulate what you will case with the Citadel]] using your life as a resource... which is no problem if you play [[Aetherflux Reservoir]].

The deck uses ways to loop back artifacts and enchantments back for you to use: [[Karn, the Great Creator]] to get artifacts back from exile. ((Academy Ruins)) to place an artifact back from the graveyard. And [[Hall of Heliod's Generosity]] to do the same but with enchantments. Your card draw comes from: [[Phyrexian Arena]] [[Necropotence]] [[Oloro, Ageless Ascetic]] [[Jace, The Mind Sculptor]] Also with [[Rhystic Study]] and [[Mystic Remora]] (or this causes your opponent to play slower, because they want to be able to pay the taxes on their spells you are creating with these two cards.)  Also, cycling [[Irrigated Farmland]] when you have enough mana or Sacrificing [[Silent Clearing]] to draw a card. If you have [[Crucible of Worlds]] out you can draw a card with Silent Clearing each turn.

You have multiple card selection cards: [[Demonic Tutor]] [[Vampiric Tutor]] [[Mystical Tutor]] [[Englightened Tutor]] [[Narset, Parter of the Veils]] [[Trinket mage]] [[Search for Azcanta]] [[Transmute Artifact]] [[Whir of Invention]] and [[Mastermind's Acquisition]]  (I like this tutor because it can also get you a piece of utility/combo or removal that was exiled earlier in the game, or tutor your deck!)

I have had a game where most of my combo pieces had part of them interrupted and I won because of [[Shark Typhoon]]. At the end of the turn, I cycled it for a large X after a long game, or it was out early with ramp, and practically the remainder of the deck (except for lands and 3 creatures) triggers it. The man-lands evade the [[Humility]] so you can also give your opponents the beat down with [[Celestial Colannade]] and [[Creeping Tar Pit]]. If you lose them to kill spells, you can get them back with [[Crucible of Worlds]] ! You also get the ability to play [[Strip Mine]] and [[Wasteland]] to land lock a player out (which everyone hates), or to remove pesky utility lands.

This is my oldest Commander deck, it use to be Sen Triplets until Oloro came out. I'll try to upkeep with this list as more cards come out and I try new things. 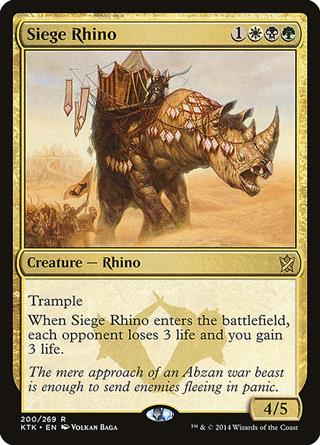