If any of you know me, you know that in Brawl, Selesnya tokens is my favorite deck to run. Back when the precons for the last Commander decks were released, I purchased the Madness deck at first but didn't find it to my liking. Then I bought the Ghired deck and immediately felt like I was in my wheelhouse. What I didn't like about the Ghired deck was after awhile it felt like the Red was just an afterthought. There is some token support in Red, but it was just...too slow I guess. I wound up cutting out the Red completely and changed my Commander to [[Trostani Discordant]]. Made some adjustments, searched FOREVER for [[Anointed Procession]] (this was about the time that Pioneer hit the ground running) and THEN discovered yet another card that I never knew about because it was the first new-old Commander card to be released for Arena Brawl: [[Rhys the Redeemed]]. This was a hard card to get a hold of. I searched everywhere for months and months to get this card (I was hesitant to purchase from online stores). Next thing you know, the Mystery Boosters come out and Rhys was included in it. TL;DR - A guy got one from a draft and traded it to me.

I spent a long time reworking, upgrading, and testing this deck. You'll noticed that a good portion of the cards in this deck are from recent sets because I recently (within the past year and a half) started playing MTG again. While I wish I had [[Doubling Season]], this deck works just fine without it. This gist of this deck is straight forward: Puke out a bunch of tokens. There are a ton of ways to do this. Because of the enormity Commander decks in general, I'm not going to go through each card one by one. I will just list a sampling of some ramp, generators, and support cards.

This deck was a labor of love for me. It wasn't the first Commander deck I built (that honor goes to [[Lavinia, Azorius Renegade]]), but it was definitely the best one I built. 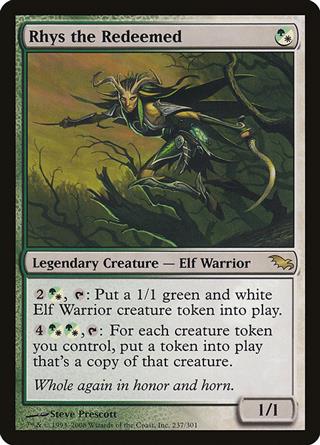