Why play this deck?

We'll start with the traditional "You might enjoy this deck if":

OK, so let's say you want to build a storm deck. What edge does Sidisi have over other storm decks, or other dedicated [[Ad Nauseam]] decks anyway? For example, why is Sidisi better suited to casting this one spell than Zur, or Oloro? Well, being mono color means we don't have to pay much attention to colorfixing and can always cast our spells. We pass over mana-intensive counterspells to protect our combo in favor of one-mana discard spells like [[Thoughtseize]] or [[Duress]].

Sidisi, being a tutor on a stick, means we can rely on having the [[Ad Nauseam]] 100% of the time. While it's a little bit harder to win off Ad Naus in one turn without red or blue, we can focus the deck on winning with Ad Naus and not other gameplans because we will always have our best gameplan open. Sidisi can also be reanimated post Ad Naus for additional tutors, or pre-Ad Naus for extra protection.

How to Win in Three Easy Steps

0) Before the game begins, assess your opponents decks. The less disruption at the table, the more likely it is we win. We are the fastest deck in the format, meaning decks like [[Food Chain]] Prossh, [[Hermit Druid]] combo, all that jazz - it's nothing to us, since they play little to no disruption. On the other hand, decks that attack our resources and play disruption are gonna kill us. If our table is full of [[counterspells]], you'll have to wait a few turns extra to tutor for protection. If our opponents are Stax players, you'll want to mulligan hard for either discard effects or a way to go under the stax - to win before your opponents have a chance to play them.

1) Ramp until you can cast [[Ad Nauseam]] and tutor for it. You'll almost always want to put Sidisi in your graveyard to reanimate her later. Once you have Ad Naus in hand, you'll want to keep your eyes open for an opening. Sometimes a blue player will tap out for a [[Time Warp]] or [[Turnabout]], thinking they'll be able to untap and counter our game-winning spell - that's all you need. Generally though, you'll want to cast Ad Naus on your own turn, hopefully after using hand-hate to get rid of any prospective counterspells.

2) Go HAM on Ad Naus. Our curve-toppers are five drops, and you'll want to get yourself down to beneath five pretty much every time. Keep an eye out for instant-speed damage - Jarads or [[Goblin Bombardments]] in play. Once you've got a full grip, start chaining mana-positive rocks (henceforth MPRs) and rituals to develop your mana pool. [[Yawgmoth's Will]] lets you do it all over again. Generally the easiest way to win is with [[Exsanguinate]], but sometimes you'll have to use [[Tendrils of Agony]]. Occasionally you won't have enough gas to kill your opponents, in which case you'll have to use Tendrils to gain a bunch of life, then [[Yawgmoth's Will]] to cast Ad Naus again, build up storm some more, and use Tendrils again.

Now that you understand the macro, let's talk micro. Generally going off with this deck is pretty easy, but sometimes we'll need to use some tricks. The first line you'll need to know is [[Krark-Clan Ironworks]]. This turns every artifact into a little ritual, and casting them all gives you a high storm count. KCI produces incredible amounts of colorless mana for a measly four. You'll want to make sure you have enough black mana though - don't cast KCI if you can't make any black after that. If you can cast [[Yawgmoth's Will]] after saccing all your artifacts, then you'll be fine, since you can recast your Moxen.

Another important card to know how to use is [[Lion's Eye Diamond]]. You can't use LED to cast a spell in your hand, thanks to errata - "Use this ability only when you can cast an instant." That's a weird sentence, but it means you can't activate it whenever you could activate any other mana ability - in other words, you can't play a spell, then sac LED to pay the costs. You can use LED in response to a tutor for mana to cast the spell, or to power out an early Sidisi. Finally, and my favorite, you can use it in response to [[Yawgmoth's Will]], then use it again immediately, and still have your whole hand at your disposal.

Sometimes you won't have enough gas to kill off Ad Naus. What you'll want to do in this situation is build up storm using [[Yawgmoth's Will]] and cast [[Tendrils of Agony]] for as much as you can. Use Tendrils to lower the opponents' largest life total to as low as possible - so if my opponents are at 37, 34, and 24, and I'm casting 20 copies of Tendrils, point nine at the first player (new life total is 19), eight at the second (new life total is 18), and 3 at the third (new life total 18). In other words, make sure you have to make as little mana as possible with [[Exsanguinate]]. Since Tendrils gains you life, this frees you up to recast Ad Naus thanks to [[Yawgmoth's Will]]. Don't forget that you don't have to kill with Tendrils or [[Exsanguinate]] - if you need to, use both! You can also cast Tendrils, cast Yawg Will, recast your graveyard, and then recast Tendrils.

If you casted Ad Naus uncounterable off Boseiju, and think your opponents might have countermagic, you'll want to make sure you put [[Defense Grid]] in play before casting more important spells. This is especially true if you're playing around [[Flusterstorm]] or something similar.

Never forget that you have [[Basalt Monolith]] + [[Rings of Brighthearth]]. This combo is much easier to disrupt than a storm combo, but it's mana-efficient. Even if you don't have an outlet for it in hand, you can usually get one somehow. Got an [[Expedition Map]]? Crack it, copy it, find two cycling lands, cycle them, copy those, draw four cards. You'll only need to be able to produce BB to play Sidisi, and use her to tutor up [[Sensei's Divining Top]]. You can tap Top, copy that, draw the top card of your library and put Top on top, then resolve the second one and re-draw and re-cast top. Repeat that until your winning card is in hand.

If your opponents somehow manage to get rid of Ad Naus, either via counterspell or [[Jester's Cap]] effect, you have a plan B - assemble the Rings-Monolith combo discussed above. You can use Sidisi to find Basalt, which you can then tap to cast her again next turn, find Rings, then untap Basalt the next turn, and make infinite mana the turn after that. Once you have infinite mana, make BB and find Top. Since this is so slow, it's often easier to just tutor for [[Yawgmoth's Will]] or even one of the graveyard shufflers we play ([[Elixir of Immortality]]) and try to Ad Naus again.

Against stax effects, you'll have to make an under/over choice - either win before the stax comes down, or find a way to win through it. Do make sure to use handhate against a stax player to try and avoid this, but we can potentially win with a stax effect in play if you can't. If it's a tax effect like Thalia, it's pretty hard to win "over" it - you'll need a lot of mana so you can put [[Krark-Clan Ironworks]] into play, or [[Helm of Awakening]]. If it's something that stops you from fully untapping, like [[Winter Orb]], you can either go off with lots of rituals or just wait until you untap fully. If it's something like [[Tangle Wire]], prioritize tutoring for Ad Naus, then cast it in your upkeep and you'll be fine. 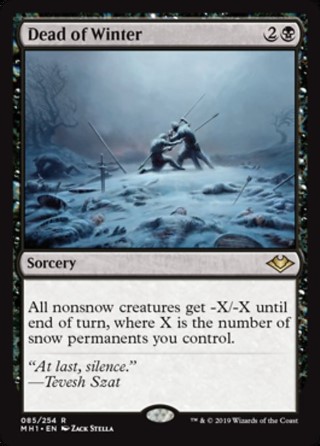