You want some early drops that fit in the Deck Strategy to mill and exile the Opponent, the scry is pretty nice either

Because my bais is telling me Gruul-Colors are a really big thing and equally annoying as hard to handle, but a simple harmless [[Aether Gust]]  on a Nissa or else, and afterwards an [[Ashiok, Dream Render]] that mills and exiles the TopDeck, is stronger than you might think in the first place

Well you can see the Opponents Hand and know what to prepare for the next Turns, as well as get rid of one Thread, plus scry 1 is convinient too

Simply because it isnt counterable

Carddraw my boi almost everything in the Deck is a non-creature Spell so hits are almost guaranteed, plus her passive is nice too

Dude, you obv didnt get the clue of this Deck if you ask this ... same goes for [[Kaya, Orzhov Usurper]], put in Exile, convent Exile-Count to Dmg - duh!

Well Spotremoval, combined with mill and Lifegain? what can we ask for more?

Cause [[Fervent Champion]] or Token from [[Castle Ardenvale]] are annoying as fuck and handled safely this way, plus our Tokens get a neat buff

For MatchUps with CounterSpells or Maybe Fires

For MatchUps with Staxx or Fires, maybe Jund Sac?

For MatchUps with FireWalkers or Heavy Planeswalker-Decks

See Despark, for reasons, cut some Soot for the Wrath 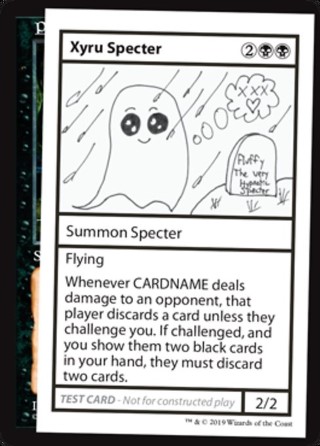