Hello Everyone! This is one of my homebrews I have made, and am excited to share with all of you.

I would love recommendations or if you have questions on why I chose some of the cards I have, let me know. I will get back to you as soon as possible. Thanks!

The main theme of the deck: Resurrection. I have always loved bringing stuff back from the Graveyard, Zombies in Commander especially. This deck, named Esper Ress, is all about controlling the game, while also controlling what is in your hand and what goes in the graveyard.

The main card in this deck is [[Bond of Revival]]. This will let us resurrect our creatures from the yard while also giving them haste. I see this as a better [[Rise from the Grave]], as we are worried about our own yard, not our opponents. We also have [[Connive]] as another revive spell and this one as the bonus of letting us Surveil 3 in case we don't have anything in the yard left. The Connive side is used rarely, but it has saved me a couple of games.

So what are we planning of resurrecting? We generally want to gain value, so we are having only creatures with matching converted mana cost or higher. We have, starting at 5, [[Lyra Dawnbringer]] and [[Mesmerizing Benthid]]. [[Lyra, Dawnbringer]] is just an amazing creature, evasion, combat power, and life gain. [[Mesmerizing Benthid]] is a card I have recently put in this deck (This deck is about 1 month of homebrewing), and I have loved it. It deals with creature decks pretty well, as being a 4/5 has helped, along with bringing along two little guys to help block. And the hexproof it comes with help against single targeted removal. Continuing the mana cost, we have [[Azor, the lawbringer]], [[Nezahal, Primal Tide]], and [[Zetalpa, Primal Dawn]]. Both the Elder Dinasours are strong creatures with big presences. [[Nezahal, Primal Tide]] has card draw on non-creature spells, which are popular. It also has evasion for 3 cards (which can fill the yard more). [[Zetalpa, Primal Dawn]]....No explanation needed for this big boy. Wrecks face, and people always look at it to read what abilities it has. [[Azor, the Lawnbringer]] is definitely a pick no one expects to see. Not letting Instants or Sorceries be cast can stop so much stuff. Card draw, Good removal, and it definitely hurts [[Arclight Pheonix]] decks once it comes out. 6/6 flyer is also nothing to scoff at. The [[Sphinx's Revelation]] ability on it has actually been useful for the life-gain and the card draw. Also a new addition, but it definitely has pulled its weight

Controlling the Board and Hands

For targeted removal, we have [[Prison Realm]], [[Vraska's Contempt]]. Vraska's Contempt deals with mostly everything and is a great card all around. [[Prison Realm]] is also a new addition recently, and it has performed well for me. Dealing with the cheaper planeswalkers that are around, along with any creature we don't like. And Scry 1 is a great addition. We have [[The Eldest Reborn]] for a removal for stuff like [[Carnage Tyrant]] and the like. It also acts like a resurrection Spell as well, always a plus. We also have [[Thought Eresure]] because it disrupts the hand against things we don't like, and Surveil 1 can also put something in the graveyard if we want to, like a [[Zetalpa, Primal Dawn]].

DRAW AND PUTTING STUFF IN GRAVEYARD

So how are we getting stuff in our Graveyard? [[Chart a course]] and [[Discovery]] are the draw cards that let us also put stuff in our graveyard. Always a great sight to see a player hover over our graveyard after we put a [[Zetalpa, Primal Dawn]] in our graveyard turn 2. We also have [[Narset, Parter of Veils]] because this is one of the most powerful cards from War of the Spark. Negates draw and lets us get to our ress or draw spells quicker.

We are gonna start the game looking for our draw spells or [[Thought Erasure]] to get ahead on cards or put stuff in our graveyard if we have any of our big creatures to put in the bin. We will then control the board with [[Prison Realm]] or [[Vraska's Contempt]]. An early [[Narset, Parter of Veils]] is also good to get the spells we need and stop card draw from opponents. Then, hopefully by turn 5 or 6, start resurrecting our big creatures we have in the bin or even playing [[Lyra Dawnbringer]] or [[Mesmerizing Benthid]]

Ragswolf 02 Aug 2019 08:47
Hey, not sure if you read these. But like 10-ish days ago I played a game with you on MTGA and I really liked your Mardu Enchantment deck. Can you share that deck, please?
lukejsmith95 28 Jun 2019 20:33
hey I've played the deck a few times now with decent results. Game 1 is hard if the Opp just goes super wide. I didn't have the WCs for benthic so I ran dream eater instead. The surveil 4 and the bounce effect is actually really helpful. It lets you set up a possible bond of revival draw for next turn whilst also adding more creatures to your yard and obviously the bounce can always come in handy!

This deck is great fun when it goes your way! Thanks
Flrmrmr 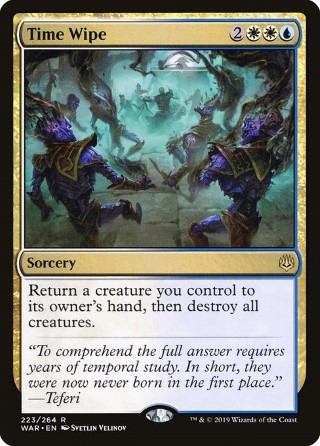