Commander - Krenko, Boss of the Mob

This deck is mostly based on the deck Krenko, Mob Boss by Game-Jester, thaks for this fun deck idea!

Deck description from him:

"The goal of the deck is not to attack with a bunch of tokens (which you can do), but is to ping opponents as goblins enter or leave the battlefield, and deal damage to opponents equal to number of Goblins you control.

Now, to get the max out of Krenko I have artifiacts that let you untap him, and equipment like Helm of the Host and illusionist's bracers.  Multi-tapping Krenko each turn is a key way to build up your army.

As for enter and exit abilities that hurt opponents, I leave that to Boggart Shenanigans, Pashalik Mons, Warstorm Surge, Impact Tremors, and Purphoros.

There is multiple sac outlets like Star of Extinction, Goblin Warrens, Skirk Prospector, Voracious Dragon, and Nevinyrral's Disk.  If you have an exit the battle field effect in play running a board wipe when you have only 80-100 goblins will end the game most of the time.

Another Key is cards that deal damage equal to number of creatures or goblins you control.  Cards like Goblin War Strike, Mob Justice, massive raid, and burn at the Stake. With 40 goblins and a well timed Goblin War Strike you can remove a player from the game.

Lastly I want go over 2 Cards I have in as great ways to make sure you live longer.  1 is Five-Alarm Fire  WHenever a creature you control deals combat damage it gets a counter, remove 5 counters it deals 5 damage to target creature or player.  So If you attack with 20 1/1s and they all deal damage, this gets 20 counters, then remove 20 counters and deal another 20 damage.  Its Brillant!  Most of the time I don't attack unless I can end the game, or remove somone.  I mainly block, but if somone swings at me with a 7/7, I block with 8 1/1s and kill the creature and get 8 counters on this.  Because the counters can be removed at instant speed there is no reason to empty it right away, I ususally keep 15-20 counters on it and use it as a stick in Politics.  Also say someone decides to swing at me with a Jank Bumped 15/15 with trample, I just dont block and before damage remove 15 counters and kill it before it deals me damage.

The 2nd card is Disrupt Decorum.  Late in the game this card can be used to have opponents kill opponents, and you just sit back and relax, because you know you can't be attacked.  The reason for this is because it has Goad (Until your next turn, all crears attack each combat if able, and attack a player other than you, if able.  This is very much a mid-to-late game card, with the goal to remove players from the game or to stop people from building a creature wall." 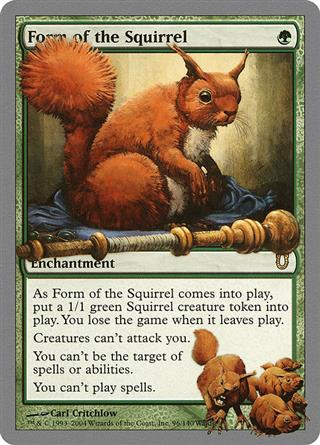