This Magic: The Gathering Deck is a Standard Jeskai (Blue, Red, White) Control Combo Deck. The core of the deck focuses on the three new Narset cards from the Ikoria: Lair of Behemoths card set:

{{Narset of the Ancient Way}} {{Whirlwind of Thought}} {{Channeled Force}}

4x [[Narset of the Ancient Way]] (Gain Health and Free Mana before Unleashing an Emblem that does 2 Damage to any target when you cast a non-creature spell.)

4x [[Whirlwind of Thought]] (Draw a card when you cast a non-creature spell.)

4x [[Channeled Force]] (Exchanged the cards in your hand 1:1 for new cards, and 1:1 damage to any Creature or Planeswalker)

So how do we handle threats and control the board until we get Narset out showing us the Ancient Way?

Non-Creature Spells are Narset's Bread and Butter. With an Emblem active, you're adding an additional 2 damage to any target of your choice! Great for crowd control while also being the main way you will be defeating your opponent.

3x [[Precision Bolt]] (3 Damage to any target: Zap the enemy creatures, sending them to the Graveyard, or throw extra damage at your opponent) (If you want something that does a bit more damage for the same cost, then I would recommend the new [[Flame Spill]] You can't target Players or Planeswalkers with it, but you get 4 damage in and it spills over to the Player like Trample would.)

3x [[Shredded Sails]] (Destroy Artifacts or deal 4 damage to fliers, with an option to Cycle for 2 Mana, don't need it? Cycle it and get something else)

{{Channeled Force}} {{Whirlwind of Though}}

4x [[Channeled Force]] (Our first new Narset Card! Red & Blue Spell to trade any number of cards in your hand for new cards, while dealing the same amount as damage to a creature or Planeswalker: This really speeds the deck up while giving you an option to knock out big creatures)

These Non-Creature Spells are everything you need to be prepared for most situations, and quickly cast and cycle the deck once you get Narset's Emblem up and running.

Embrace the madness, fam. Here on the shores of Raugrin in Ikoria... we do things a bit differently. It keeps life interesting, both for us, and our future family.

Remember what Vin Diesel has taught us, "We don't have Friends... We have Family!"

There are a few Creatures we use to really make Narset shine!

4x [[Cloudkin Seer]] (Blue cost Flying 2/1 Creature that allows you to draw a card: Speeds up the deck, and gives you a little creature play)

4x [[Spark Double]] (Probably the most flexible Blue Creature from the War of the Spark card set: Use to make copies of Narset herself! Yes, it's true! With Spark Double, you can have multiple of the same Planeswalker out at the same time, and they get a +1 Loyalty Counter to boot! Thanks, Jace!)

So How Are We Paying For All Of This? (Spoiler Alert: You only need 15 Basic Lands!)

After a lot of testing and Mathmagic scribbling, this is the best Land Composition for this deck:

So How does this work? Well we have a bit of help from these two lands:

4x [[Fabled Passage]] (Immediately Search for a Basic Land, play it tapped! Unless you already have 3 Basic Lands out, then it comes in untapped!)

With those two lands, you'll be a kid in the Mana Candy Store! This speeds up the deck and you can think of it as subtracting 8 cards of fluff to get to the meat of the Narset Jeskai Control Combo party! Speaking of...

{{Narset of the Ancient Way}} {{Jace, Wielder of Mysteries}}

4x [[Narset of the Ancient Way]] (The Star of the show and best new Planeswalker! Narset has finally mastered the Jeskai ways! Blue, Red, & White to cast: She starts with 4 Loyalty Counters, your goal is to get her to 6 and proc her Emblem. She will help you pay for your Spells, so pay attention to your hand and Lands available when choosing which color she generates. she also gives you +2 Health each time she generates Mana for you. So she can keep you alive as you ramp up for the Emblem)

1x [[Jace, Wielder of Mysteries]] (Jace, what are you doing here? Not only is it flavorful to have Jace here because we're using his [[Spark Double]], but he acts as a very important Safety Net. I call him "The Breaks". Narset can gather so many cards with multiple [[Whirlwind Thinking]] as well as other deck blasting spells, it does occasionally happen that you will run out of cards. They go by FAST! But Jace is great. He breaks the rules... instead of losing when you run out of cards... you win! Sweet!)

[[Narset of the Ancient Way]] + [[Spark Double]] (What's better than 1 Narset? 5 Narsets! (With 3 in Reserve) usually you will summon Narset, and the turn afterwards, play the Spark Double. Now you're gaining 4 health total for their +1 Loyalty Abilities as they climb to 6 Loyalty Counters not to mention the extra Mana for your spells!)

Narset Emblem + Narset Emblem + ... (Remember, each Narset Emblem is 2 damage to a target of your choice. Use your powers of a mathmagician to clear the opponent's board. Focus on the Creature threats first, then go for the player kill!)

[[Whirlwind of Thought]] + [[Whirlwind of Thought]] (What's better than drawing 1 card with every Non-Creature spell cast? Drawing 2 Cards with every Non-Creature spell cast! Be careful that you only keep 2 (mayyyybe 3) active at a time... 4 is overkill and you'll be over drawing your deck. Only do that if Jace, the Break is out and you're trying to deck yourself for the win.)

[[Whirlwind of Thought]] + [[Channeled Force]] (you will always get back the number of cards you discard + 1 with this combo. And EVERYTHING in your deck gets you closer to the win. Don't be afraid to burn good cards if you need to. Just keep a mental note of what's still left in your deck. Remember you got a lot of 3s... 3 artifact destructions, 3 enchantment destructions, 3 big damage, 3 exiles, 3 creature shutdowns, etc. You have lots of options with every new card!)

[[Whirlwind of Thought]] + [[Anticipate]] (Great for giving you more options, Early game choose Basic Land, remember the cards you don't choose go back to the bottom of the deck, which you'll probably get to anyway. Mid Game, grab the pieces you need, Narset and the Spark Doubles, Late Game, grab all those small Non-Creature Spells and go to town! for the cost of Anticipate you get a card of your choice + 1 more, and by that time you're going to have enough Mana to cast 3 or 4 Non-Creature Spells (maybe more) With the emblems out, burn through as many Anticipates and low cost Non-Creature Spells as possible, Whirlwind will keep you topped off with cards until you run out of Land. Wash, Rinse, Repeat during your next turn.)

[[Wanderer's Strike]] + [[Narset of the Ancient Way]] (Wanderer's Strike Proliferates! That's a fancy MTG term for "put Counters on all of your Narset Planeswalkers!" Get her closer to 6 sooner.)

So, How do you Pilot this Deck?

These are your mission Objectives:

Try to get to 4 Lands as safely as possible early on. You will probably get a little bloodied against some decks like Red Deck Wins or other Agro Decks, but if you can manage the Battlefield and survive to about 4 - 5 Basic Lands, you're gonna be in a good position to come back and Surprise the best of 'em! The Narset heals (mixed with Light of Hope heals) also add up really quick and you'll be back to 20 (and beyond) in no time!

Go forth and conquer! 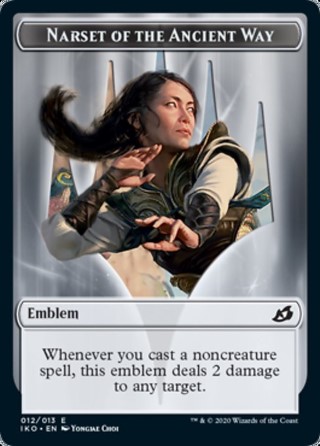