Commander - {IRL} kadena in the arena

This deck focuses on closing out the game w/ any combination of [[Beastmaster Ascension]] & [[Overwhelming Stampede]].

[[Words of Wind]] can double as a secondary wincon, enabling us to hard reset every opponent board. Most of the time it'll be used as extra utility, being a means to set up bigger things and move us further ahead.

With [[Illusionist's Bracers]] on [[Aphetto Alchemist]] and a mana rock or dork, infinite mana can be generated. This enables us to play and cycle morph creatures as much as we want, therefore allowing an entire deck drawing alongside our commander.

Alongside infinite mana, keep in mind whether or not it's colored. If not, then keep availability in mind. Very often if you go off using [[Sol Ring]] or something, other rocks will eventually be drawn.

If somehow this combo isn't hit or neither wincon is met, [[Brine Elemental]] + [[Vesuvan Shapeshifter]] can be used to slow the progress of opponents to a crawl. [[Teferi, Mage of Zhalfir]] is a budget [[Vedalken Orrery]] for this deck, but his third clause is effectively a [[Silence]], providing more protection for morph setups.

How to build a 3 color mana base

Obviously, the utility lands should tie into the deck themes.

Here are the 3 themes I think are most important to a Kadena deck.

Man Lands: (Not really an emphasis for this deck, since we play cheap dudes anyway)

Bounce Lands (Can also be run as Utility Lands, BUT Filters would still be required!)

Pref. other lands that offer our tri colors, etc. otherwise

Changed the deck to a mill theme, then back to a theme that synergizes w/ the entire gameplan as a whole, rather than having more than one. The recording of these changes was unfortunately neglected.

Yes, BOTL is a morph creature, but if it's being run its ability should be a little more impactful. Attempting to have it be a one-sided board wipe means leaving it alone on the board for a long time. Even if it's successful, you have to rebuild just like everyone else. If you play w/ the same play group again, they'll be more suspicious and it'll only draw the game out. BOTL will very often be just played as a 3 mana deal 1 damage to all creatures. Sure, AID doesn't hit big bad Eldrazi, but every one of them can be countered w/ a normal counterspell, which this deck has plenty of. AID also leaves you w/ a board, as morphs/spirits/manifests are all colorless.

One less filter rock for one that's similar to [[Arcane Signet]].

A similar initial mana investment that yields more accumulated value. Mana abilities are anything that adds mana to your pool, and since we don't have [[Rattleclaw Mystic]] IB seems like a great option to double up on some flip ups.

GC performs the only practical use case for [[Bane of the Living]], and provides a couple other options too. VP gives us plenty of counterspell options, and since we already have plenty of bounce effects, ET can be subbed.

Just a massive amount of utility from tapping into [[Volrath's Stronghold]] to some other player's Urborg combo.

Why have just one simple land morph when you can return all the morphs from the graveyard?

Optimally, all three signets would be included. However, since this mana base is fairly robust, TD can find a home here. GS gets cut b/c it has the two least impactful colors in the deck. TD can be a Kadena substitute when needed, and can also help pay for the heavier colorless morph costs.

S's ability is just hilariously expensive to be a worse [[Murder]].

Allows ignoring of [[Vernal Equinox]] as an inclusion, to avoid its clause that allows opponents to cast at instant speed.

JI is really effective in the early game, when you don't have many creatures and can potentially pull out some good morphs before casting Kadena. However, ET is good at all points in the game b/c it provides the option of bouncing our creatures or an enemy's.

Replaced TW since it's fairly weak, & VC since it's weak in this deck. TS & CS add ways of bouncing morphs, and subsequently drawing more cards w/ Kadena. They can also save creatures from spot removal. 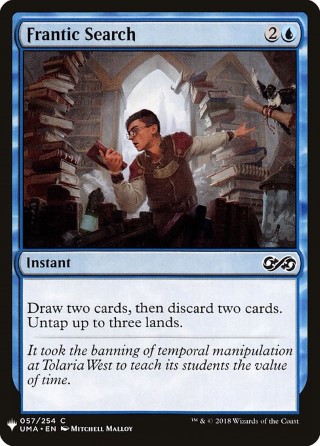