So I've been rummaging around through whatever pre-rotation decks I wound up saving in my deck list. Izzet Wizard tribal has always been one of those tribals that was really fun to play around with. It could put on fast, aggressive pressure while still being able to moderately hold its own against more midrange tribals like Merfolk. This deck is geared for BO1. As such, no sideboard this time.

This is a very aggressive build of Wizards. We have some Hasty folks in [[Ghitu Lavarunner]] and [[Lightning Stormkin]] that allow us to exert early pressure. [[Adeliz, the Cinder Wind]] is our lord allowing us to pump up our wizards every time we cast a spell. This stacks with self-boosts from [[Burning Prophet]] and [[Wee Dragonauts]] as well. On to the deck itself.

We're running an aggressive Wizard package with Stormkin being Hasty and Ghitu able to be Hasty when its condition is met. Prophet boosts itself when a non-creature spell is cast along with Scry 1 to fix our draws. Wee Dragonauts boosts itself when an Instant or Sorcery is cast. Both these boosts stack with the boosts Adeliz gives when an Instant or Sorcery is cast.

Honestly, with so many card draw spells we have here I was THIS close to slotting in [[Irencrag Pyromancer]] somewhere, but I decided against it for the time being. We have three avenues of card draw with Opt, Crash, and Fury. Crash gives all our creatures Trample. Fury gives all our creatures First Strike. Lightning is a cheap removal/burn spell for us whenever a Wizard is down and Retort is a 2 mana counter when a Wizard is down.

Kasmina is a form of protection for our Wizards on top of giving us a 2/2 Wizard token and Loot 1. Icon is a one of in here because it isn't critical to our overall game plan, but can provide a bit of protection for our Wizards in addition to letting us dig into our deck. Vantress allows us to fix our draws and Sanctuary allows us to recur a spell if its condition is met.

This deck is extremely budget friendly with the only rares being the Castle, Icon of Ancestry, the four shock lands, and the four check lands. To make it 0 rare, you can just swap out the Castle for an Island, the shock/check lands for tapped lands, Guildgates and/or Life lands, and Icon anything you want really like a fourth Retort, Lavarunner, etc. 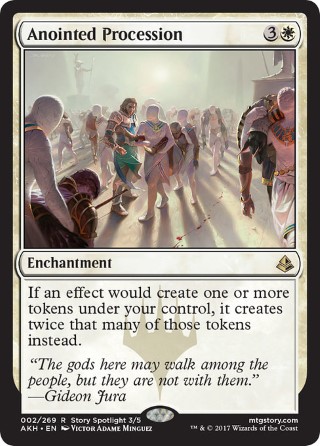