I consider myself a pioneer of this archetype, and decided to take it upon myself to build this deck down to the barebones to get players newer to modern a starting point to build upon.

1) The very most important thing you could to to first improve this deck would be to acquire 4 snapcaster mages, to replace the mission briefings.

2) Next Aquire at least 2 cryptic commands

3) Next Aquire at least 2 blood moons to place somewhere in your 75s, it is crucial in certain matchups such as tron and scapeshift.

4) Next Aquire 4 scalding tarns (A must if you're serious about the deck) You will lose a very very minor amount of percentage points if you build with flooded strand or prismatic vista instead. You can also build a fetchless fiery islet build, which will actually gain you percentages in certain matchups, but lose you percentage points in others.

5) At this point you should own all the expensive base cards all competitive blue moon decks require, from here you must branch out and choose an angle of attack.

While blue moon may be a wayward descendant of splinter twin, not all versions have a combo finisher. Izzet control utilizes powerful 2-1 spells, draw spells, and sometimes planeswalker to both stop your opponent's game plan, and to turn the corner and kill them with tempo style creatures. This is the last and final draw-go style deck left in the modern format as Blue White Control turns toward sorcery speed kill spells, planeswalkers, and even stoneforge mystic to combat its opponents.

This deck takes an all in legacy style tempo approach in exchange for control magic and planeswalkers, cards like delver of secrets, young pyromancer, nimble obstructionist, thing in the ice, vendillion clique and seasoned pyromancer are all acceptable and encouraged here (Don't play young pyromancer and thing in the ice in the same deck the nonbo is very real). This is a real fast paced spellslinger deck seeking to overwhelm your opponent in a way that involves tempo plays and not at all involving cards like cryptic command and jace the mindsculptor. You can consider this deck a devolution of the former Blue Red Phoenix deck.

The same as blue red delver but with a larger focus on wizards and lightning bolt effects. Bolt snap bolt is a very real game plan here.

This blue moon deck seeks to kill its opponents by assembling kikijiki, mirror breaker and deciever exarch/pestermite to make infinite hasty tokens to kill your opponent. The combo is fragile and disruptable, but its backup gameplan of killing an opponent with annoying tempo creatures and control magic is a more then decent one. This is the truest child of splinter twin.

This blue moon deck seeks to use madcap experiment to play platinum emperion or platinum angel, which is difficult for some modern decks to deal with. It's mostly a gimmick with a lot of gotcha potential. Other times it is merely a long drawn out stall. Decks that can routinely deal with your payoff will crush you.

This blue moon deck uses tempo spells like remand, mana leak, and lightning bolt, to stall for a turn 3 Narset followed by a days undoing to mind twist your opponents hand away, or the traditional blood moon to lock down an opponents manabase. Good against certain midrange decks and other control decks, but atrocious against graveyard strategies and fast aggro strategies.

This blue moon deck uses tempo countermagic and burn to stall the game while it digs to assemble a 2 card combo of through the breach and emrakul the aeons torn to wipe away an opponents board. This deck struggles with card advantage and having the right interaction at times do to the nature of having to play 4 of redundant combo pieces that get drawn in multiples. This deck doesn't have a great backup plan.

Do yourself a favor and stay away from this one. This decks seeks to play a version of jace that doubles as a laboratory maniac, and sequential play a creature called leveler which puts your library into your graveyard. Not only does this deck struggle with the same issues as the breach emrakul combo, it has to cast both a 4 and 5 mana sorcery speed spells in sequential order to finish the game without an even halfway decent backup plan. The good news is that this combo is extremely inexpensive. 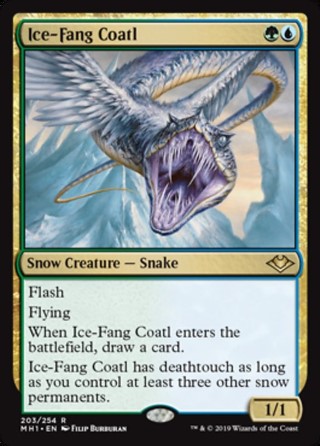