v1.1 - Put in the "Maybeboard" option and guide for a Wolf Meme with Arcane Adaptation. Credited Dr. Spilikin for the idea.

So as soon as the M20 cards were getting spoiled, I knew I wanted to make a wolf tribal deck. War of the Spark gave us [[Tolsimir, Friend to Wolves]] and [[Arlinn, Voice of the Pack]] as fantastic synergy cards for a wolf tribal. M20 added a TON of wolves as well. I played this deck in the Dominaria Standard Shakeup event on Arena and it performed pretty well. It is not a bad card in regular Standard as well because the value Tolsimir can give you if unanswered can be very surprising. This deck is also mostly rotation-proof with only [[Llanowar Elves]], [[Shalai, Voice of Plenty]], and [[Sunpetal Grove]] rotating out. You will miss some ramp with Llanowar and some protection and boardwide buff with Shalai at rotation which is unfortunate, but it isn't a deck killer imo.

4x [[Paradise Druid]] - A really nice two drop to come out of War of the Spark. I was running [[Incubation Druid]] because it is so much easier to ramp with it if you can get at least one counter on it, but it was extremely vulnerable until that point. Paradise Druid allows you to tap for one mana of any color. It protects itself with Hexproof as long as it is untapped. So you won't have to worry about losing it to burn spells as soon as you drop it.

3x [[Arlinn's Wolf]] - A 3/2 for (2)(G) that can't be blocked by creatures with power 2 or less. Really nice for sneaking damage in past weenie and aggro decks without worrying about chump blockers. The more it gets buffed, the more of a real threat it becomes.

2x [[Shalai, Voice of Plenty]] - Hexproof for you and your other creatures/Planeswalkers. Shuts down spot removal as well as annoying stuff like [[Settle the Wreckage]] and [[Thought Erasure]]. Can pay (4)(G)(G) to give all of your creatures +1/+1 counters.

3x [[Nightpack Ambusher]] - Wolf lord. For (2)(G)(G), you get a 4/4 Flash that gives all other wolves +1/+1. On top of that, if you don't cast any spells during your turn, Ambusher creates a 2/2 wolf token on your end step. This can synergize really well with [[Vivlen, Champion of the Wilds]] because she gives all of your creature spells Flash. So with both out, you can have the option to not cast anything, let Ambusher create tokens, and then Flash in creatures on your opponent's turn.

4x [[Tolsimir, Friend to Wolves]] - 3/3 for (2)(G)(G)(W). Creates [[Voja, Friend to Elves]] token that is a 3/3 Green/White wolf. On top of that, anytime a wolf enters the battlefield under your control (including the Voja token), you have the option of having it fight another creature you don't control. Then you gain 3 life (you will gain this life regardless of whether or not the wolf fights another creature). A very fun and different way to run a tribal as it basically turns all your wolves into spot removal spells. Combined with things like [[Arlinn, Voice of the Pack]] and [[Nightpack Ambusher]], you can start removing a lot of stuff.

2x [[God-Eternal Oketra]] - 3/6 Double Strike for (3)(W)(W) that creates a 4/4 Zombie with Vigilance everytime you cast a creature spell. REALLY hard to get rid of permanently if she hits the board. Really multiplies your wide board state.

2x [[Unbreakable Formation]] - Gives all your stuff Indestructible to counter board wipes. If you cast this on your main phase, all of your creatures will get +1/+1 counters and Vigilance on top of Indestructible to allow you to go swinging in hard.

2x [[Icon of Ancestry]] - Declare a creature type as it enters the battlefield. All creatures of that type get +1/+1. You can pay (3) and tap it to look at the top 3 cards of your library for a creature of the chosen type. I put this in here late. On paper, it sounds like a great card. In practice, it might be another story. The +1/+1 to all wolves early is pretty nice and it might be okay to just use it for that. The second effect could make it easy to just be a three mana waste, but it does help you filter through the stuff you don't really need anymore. Let me know how it works out for you.

{{Arlinn, Voice of the Pack}} {{Vivien, Champion of the Wilds}} {{Ajani, the Greathearted}}

2x [[Ajani, the Greathearted]] - Static ability gives all your creatures Vigilance. +1 to gain 3 life. -2 to put a +1/+1 counter on all creatures and 1 loyalty counter to all other Planeswalkers. Ajani is pretty good for this deck.

2x [[Arlinn, Voice of the Pack]] - Static ability gives all your wolves a +1/+1 counter as they enter the battlefield. This includes the 2/2 wolf created by her -2.

2x [[Vivien, Champion of the Wilds]] - Static ability gives all your creature spells Flash. +1 gives one of your creatures Vigilance and Reach until the start of your next turn. -2 lets you look at the top 3 cards of your library and exile one. If you exile a creature card, you can cast it at any time as long as it remains exiled. This effect remains even if Vivien leaves the battlefield.

-If [[Icon of Ancestry]] is underperforming, it is perfectly okay to swap it out for two more [[Unbreakable Formation]] or 2x [[Conclave Tribunal]] for spot removal.

-If you don't feel like [[Ajani, the Greathearted]] is a good fit for you, [[Vivien, Arkbow Ranger]] is a really good swap. While you aren't required to make a sideboard to have her in your deck, you really should because if you get to her -5, you can bring in some surprises to help edge you out against whatever you are facing. Just keep in mind that you will be losing the static Vigilance.

If you want to add some memetic flair to the deck, I took some inspiration from Dr. Spilikin's pre-M20 Arcane Adaptation Wolf Tribal deck seen here. The deck adjustments are:

The Lotus Field, Gift of Paradise, along with Paradise Druid will help ensure you get your blue mana for Arcane Adaptation without having to splash colors. When you play Arcane Adaptation, declare "Wolf" and watch the wolf synergy fly to hilarious levels. It would be something fun to play with before Arcane Adaptation rotates out.

If you really want to make someone hate you, swap out Ajani, the Greathearted for [[Vivien, Arkbow Ranger]], throw one or two [[Polyraptor]] in the sideboard, and then use her -5 to bring out Polyraptor. Combined with Arcane Adaptation and Tolsimir, you will have a loop of Polyraptors that will only end when your opponent has no more creatures. 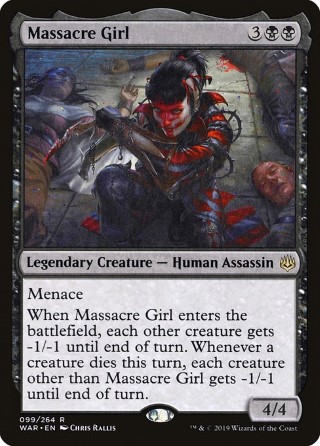