Hot damn do we have a spicy one here!

I have been playing around with this particular brew of RDW the past few weeks. I think I have it tuned as good as I can foresee so far before Throne of Eldraine releases. Let me know what you would smash into the sideboard as I mainly brew for Bo1 Arena. Anyhow let's break this one down.

We have five one drops with haste, and five one drops that can guarantee damage on turn two. Two of our one drops can gift haste, this can be a good win option if the pieces fall into place right later on. [[Scorch Spitter]] should almost always take priority with all the one drops. Followed by [[Tin Street Dodger]] and lastly [[Torch Courier]].

Turn two can be heavily up for interpretation with this deck. Getting [[Cavalcade of Calamity]] on curve does have its advantages and shock value, but there are removal options with [[Lava Coil]] or an early [[Heartfire]] clearing the board if the threat is large enough. [[Runaway Steam-Kin]] is another good go-to if you feel the need to build a larger defence or invest in the near infinite mana it can generate if you are drawing out harmoniously with [[Light up the Stage]].

Things get really good in the third land drop on curve. our options being [[Chandra, Acolyte of Flame]], [[Legion Warboss]] or [[Chandra's Spitfire]]. None of them are good news for your Opponent if you have [[Cavalcade of Calamity]] Active. Chandra is great if you have a clear battlefield, she can survive 3 damage hit and still pop her Elementals once more.

Warboss will bring one 1/1 Goblin on board to increase the potential to ping for spectacle if played a little later than turn three, so it is a good option if you need to dig for more burn, mana, or to be honest anything really with LUTS. If your lucky and the Goblin token survives its mandatory attack phase next turn you have two that will fire off Cavalcade and possibly more.

We cannot forget our t3 shock with legs AKA [[Ember Hauler]]. I was rather surprised wasn't another elemental following MTGM20s general flavor with red but whatever. This one is pretty low on the priority seeing as it doesn't trigger Cavalcade, does not have haste and its sac and burn does cost and additional 1 mana. Regardless of its drawbacks this special little guy can move that health from 2 to 0 right when you need to, or be the tipping point while at the same time protecting you from an attacker. Don't underestimate this guys lifting power even though it is lower on your casting priority. Worst case Ontario you burn him for your single [[Risk Factor]].

Whenever you don't need to play a defensive stance with this deck, bring out Light up the stage when in hand even utilizing Chandra's -2 if need be to hard cast them into exile late game, but only use that if you know your ahead. It's an oddball possibility later in the mid game but usually there isn't a late game. Something silly needs to happen like your Opponent playing [[Settle the Wreckage]] or any future mana for creature wipe spells that could come across our way in the future.

If you have played your pieces right you should be able to pile up your little guys and in addition to pinging with cavalcade, pump up your Spitfire, throw your Heartfire in the face or use them to clear the path. You can gift haste to your Spitfire with courier to get this move in right away. If this happens it can be a beautiful calamity of burny goodness. Also This build is currently rotation proof, with three upgrade spaces in the Risk Factor and the Ember Hauler, Obviously depending which burn mechanics we will see. Who knows, we may see a better 1/1 haste as well, (RIP [[Fanatical Firebrand]].)

The single [[Risk Factor]] has won me a fair bit of matches if played right. People often let the first one through, but this deck doesn't need a t3 Risk as it can get your Opponents health fairly low by then without it. It will force your opponent to let you draw out even more playing it later on which odds are is when you will see it being a singleton. If you do get it early and your opponent is playing passively or defensively this is a good lure or early 4 damage to put them over the tipping point a turn early. 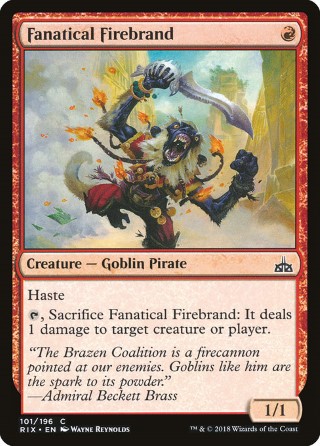