Commander - Wake Me Up, Before you Brago Go

Then who was flickering the creatures... [[Brago, King Eternal]]! This fun deck blinks its permenants since almost all of them have enter the battlefield effects that produce tokens! Lets get to swarming!

These cards are going to get you tons of value and you should try to have at least one of them out most of the time.

[[Brago, King Eternal]] is the most importnant card in the deck because he allows us to blink our permenants, which all have enter the battlefield effects, creating a horde of tokens very quickly.

Next is [[Panharmonicon]] which can make the deck work all on its own, by doubling our enter the battlefield effects and is even more effective in combination with Brago.

[[Anointed Procession]] doubles the number of tokens we make with our enter the battlefield effects, its too bad were not in green for the other token doublers, but this one will do just fine and to see it and the two previous cards all on the board is a thing of beauty!

Lastly, [[Venser, The Sojourner]] who work wonderfully in the deck. His +1 lets us flicker an extra permenant each turn. With his -1 he garentees [[Brago, King Eternal]] will be able to deal combat damage. Lastly, his ultimate can win you the game very quickly by exiling all your oppontents stuff!

Lets get to makin' some tokens! Most of the cards in the deck are devoted to this endeavor.

Cards like [[Aquatic Incursion]] and [[Belfry Spirit]] produce multiple tokens which is good for swarming the board.

While crads like [[Wing Splicer]] and [[Blade Splicer]] produce large golem tokens which are harder to kill and they give those golems power ups.

But the best token generators are cards like [[Captain of the Watch]] and [[Master of Waves]] who both create large amounts of tokens and power them up!

Part 3: Keeping Stocked up on Cards

Commander games can go long so we need a way to keep the wind in our sails so to speak. Card draw, like most everything in the deck is also provided by blinking cards, whether thats creature cards like [[Cloudblazer]] and [[Mulldrifter]], or noncreature spells like [[Alchemist's Vial]] and [[Dovin's Acuity]].

Part 4: Keeping Control of the Board

It's important to be able to knock our opponents back if they seem to far in the lead these cards help with that. Cards like [[Act of Authority]], [[Phyrexian Ingester]], and [[Spine of Ish Sah]] let us remove our opponent's threats whenever we blink them.

While cards like [[Reflector Mage]] and [[Exclusion Mage]] can bounce our opponent's creatures each time they are blinked.

Lastly are the cards that keep your opponents from attacking us. First is [[Forbidding Spirit]] which we can blink each turn to make it costly to attack us. Second is [[Stonehorn Dignitary]] who lets us skip an opponents combat phase when we blink him.

Now that we have a board full of tokens we need to buff them and swing in for the win! Our Planeswalkers will be our best way to do this since they are both good targets for blinking and have powerful utilmates that can win the game. But there are a few other cards that can work as well.

First is [[Elspeth, Sun's Champion]] who not only produces token but with her ultimate gives an emblem that gives our creatures +2/+2 and flying which will end the game quite quickly. [[Gideon, Ally of Zendikar]] should also be mentioned here since he is essentially a weaker easier to pull off Elspeth.

Second is [[Ajani Goldmane]], hes a bit more of a slow burn than Elspeth but potentially stronger since its not his ultimate we are most interested in. Ajani's -1 lets us put a +1/+1 counter on each of our creatures, and if we blink him he can do it twice in a turn! [[Ajani, Adversary of Tyrants]] is similar to [[Ajani Goldmane]] but only puts counters on two creatures, on the plus side he does have great token generation.

Next is [[Elspeth Tirel]] who like the other Elspeth card can produce tokens but thats not the best part, with her -5 she can destroy everything on the board other than tokens and lands, which is great for us since making tokens is our MO and this will most likely lead you to victory. Just be sure the timing is right when you decide to pull it off, otherwise you could hinder yourself by destroying all your token generation and let your opponents pull ahead.

Finally, [[Cathars' Crusade]] gives us incrdible value by letting us put a +1/+1 counters on each of our tokens each time either a creature enters the battlefield or is blinked by Brago! [[Anafenza, Kin-Tree Spirit]] works similarly but is a weaker lower mana costing version.

Some of the cards in the deck don't fit neatly into one of the above categories so I'm going to mention them here.

[[Oath of Teferi]] gives our Planeswalkers the potential to use 4 loyalty abilities in one turn if Brago is able to blink them. But, that's not all Oath of Teferi also lets us double blink a card each turn greatly increasing our token generation!

[[Oath of Gideon]] also serves a double purpose in the deck by not only being a great token generator but also giving our planeswalkers more loyalty to work with.

[[Sun Titan]] is perfect for recovering from a board whipe if it happens (and it's commander so of course it will) or just building your board since he can bring back our token generating cards that have a CMC of 3 or less whenever he either enters the battlefield, attacks, or is flickered.

[[Lightning Greaves]] and [[Swiftfoot Boots]] are used to allow [[Brago, King Eternal]] to attack the turn he is played so the deck can get off the ground faster, they also help protect him by giving him either hexproof or shroud.

[[Spark Double]] can be whatever we need at the time since we can blink it and change it, but our best bets are either one of powerful planeswalkers to get more tokens or +1/+1 counters, or [[Brago, King Eterenal]] which will allow us to double blink our permenants!

If you think there is a card that will work well in this deck or you have a cheaper alternative to a card in here be sure to leave a comment!

Also, if you find this deck or my other decks funny at all you might check out my "comedy" podcast "From Our Perspective". It's on Itunes, Spotify, and Youtube, Episode 20 is about trading cards so go check it out!

And I hope you enjoy blinking your creatures with your spooky ghost friend Brago! 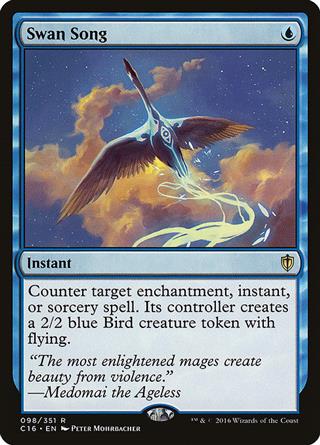