Personally, I'm tired of seeing explore being used as a filler engine in everything, but I do still appreciate the Explore mechanic as a standalone.

Basically [[Bolas's Citadel]] is your ultimate win condition. [[Wildgrowth Walker]] is a powerful card that can win games against Mono Red burn, along with the explore engine being consistent enough to hold it's own against the midrange of many other matchups.

Early game you will want to focus on ramping and throwing down your explore creatures to dig through to your lands as fast as possible. In most matchups you can comfortably trade your non Walker creatures for your opponent's creatures, as all you are trying to do is survive until Citadel hits the board. [[Path of Discovery]] gives you the ability to plus in Life constantly off wildgrowth walker, even when casting your spells from the library with Citadel.

Save your land drops in hand, and your open mana once Citadel hits the board for when you run into top deck lands, and use your explore engine to move them out of the way.

[[Gaea's Blessing]] allows you to recycle your entire graveyard, which is important as you can actually burn through a whole deck multiple times, and helps you burn out control decks easier. [[Kraul Harpooner]] allows you to deal with Lyras, Krasis, Bolas, Aurelia and many more early-late game threats.

Also remember that Citadel can blast for 10 damage, so you can save your creatures from Settle the Wreckage exile by sacrificing them for burn, and recycle them later with Blessing.

[[Liliana, Dreadhorde General]] is just a bomb that makes boardwipes give you card advantage, and [[Vivien Reid]] deals with enchantments and gives you advantage in the off turns. Viv's ult is another checkmate. Both of these cards can be substituted easily for other things, like more Harpooners.

Be very wary of [[Ashiok, Dream Render]], as its ability will nuke your entire graveyard. Cards like these should be removed from the board with [[Assassin's Trophy]] whenever possible. Trophy is very nice in this deck as it can deal with a flexible range of dangerous permanents, and the ramp your opponent gains will usually not be a bad trade.

If you're up against counters, try to drop your Citadel on a turn they are tapped out. Mono Blue in particular has trouble against the Explore engine unless they draw the nuts, but few decks can compete with mono blue's God hands anyway.

I openly welcome suggestions and criticism! 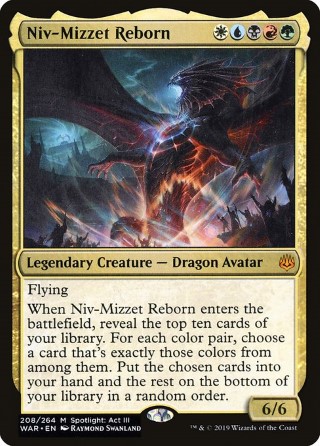