This deck utilizes [[Unmoored Ego]] as it's sole win condition.

If you love this card then read on :)

Funny enough the most important support card for the deck is actually the [[Primal Amulet]]. It's primary function is to speed up the win condition by allowing us to cast the the same Unmoored Ego twice. That alone wouldn't be enough of a reason to keep it around - it also helps us establish board dominance easier by doubling down on removal like [[Vraska's Contempt]], [[Mortify]], [[Cast Down]] or [[Cry of the Carnarium]] and gaining card advantage with [[Chemister's Insight]] or [[Revitalize]]. Once you have this baby transformed it's practically game over.

The deck has enough spells to transform the amulet quickly when it comes up, but it's still a good idea to keep some spells in hand for when it comes up if you're not feeling pressured.

The handfull of counterspells in the form of [[Dovin's Veto]] and [[Devious Cover-up]] are there to mostly help with esper matchups, but will save your skin often enough in other matchups too. We're playing only 4 of them in total and there will be times where the opponent will be caught off guard by us actually having countermagic. The other important use of Devious Cover-up is to prevent self-milling when the other player is stubborn enough to see the game to its conclusion ;) And in a pinch you can even counterspell your own spells to shuffle back those Unmoored Egos

As far as matchups are concerned the deck has enough lifegain and board control to actually present a decent winrate against aggro and midrange decks. Combo decks are usually easy prey for it since they heavily rely on one or two cards to win and will fold as soon as you exile it (buh-bye [[Nexus of Fate]] XD). Control matchups are the hardest, especially esper can easily overwhelm us with their countermagic if they get rolling.

The deck requires a good knowledge of the meta and cards to play properly. Games against non-agro decks are usually won or lost based on how quickly and how well you can guess what they're playing and exiling the key cards that give you the most trobule. This comes with practice and experience.

For example against Esper you would usually start by exiling Negate and Absorb to weaken their counterplay since that opens the door to deal with their Teferis and what not using other cards in your deck.

Against monored you'd exile their draw first to keep them playing topdeck, stuff like [[Light Up the Stage]], [[Risk Factor]], [[Experimental Frenzy]] and then their highest damage spells that they have the most left of in their deck.

Against white you're good anytime you can cast [[Cry of the Carnarium]] and against blue aggro you exile their countermagic (again: Negate, Wizard's Retort) and draw (Curious obsession etc)

Always keep in mind spells that cannot be countered, especially [[Banefire]] and also keep a close eye on [[Expansion]] which can backfire in your face (somebody Unmoored Ego'ed me with Expansion once and it wasn't funny :D)

Last, but not least. This is a modified version of a deck made by the youtuber MTG Arena Original Decks - I recommend you check their channel out - it's full of wonderful jank https://www.youtube.com/channel/UCP4rccaiVAo1DvOze5vnmUw 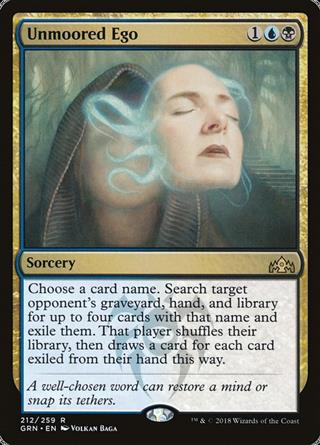