Let us establish the format rules.  250 card singleton deck, with at least 20 cards of each color.  Multicolored cards count toward each of the cards colors.  For example, Knight of Autumn counts as a Green card and a White card towards the 20 card minimum.  No cards are banned, every card is restricted to a single copy.  No sideboards are used for this format.

Every Magic deck built can be classified as one or more of the three archetypes, Combo, Aggro and Control.

Combo is the assembly of two or more cards that win the game instantly, or, one or more cards that generate an overwhelming advantage over the opponent.  In today’s Magic, Combo is generally found on Planeswalker minus abilities.

Midrange is a strategy that exists between Aggro and Control and is usually a hybrid of both.  Midrange generally uses medium cost creatures alongside efficient removal spells, to try and survive Aggro decks and win through medium cost creatures and spells.  Midrange decks primarily contain three and four converted mana cost creatures and spells.  Midrange usually spends the first few turns neutralizing opponents threats, then building board advantage on turns three and four, and seeks to win through combat based damage, usually by turn six.

How the deck archetypes relate to Prismatic Format – 250 card singleton.

Pure combo, two or more cards that win the game instantly, is very difficult to build around in a 250 card prismatic singleton environment.  The combo that we seek to include in our deck will primarily come from Planeswalker minus abilities.  Planeswalkers are generally considered the strongest of the card types in the game and should be included in the decklist where possible.

Control is generally the strongest archetype to build around in the Prismatic Format.  Because the opponent is under the same deckbuilding constraints as we are, they will not be able to consistently pressure our life total early which should gives us time to win through late game threats.

Our deck will need to include at minimum 20 of each color.  This will end up being a boon to our deck rather than a burden as we will have the opportunity to draw upon the strengths of each color to build our deck.  Below is a brief synopsis of what we will seek to include from each color.

Blue’s strengths come from card drawing, tempo, and big threats that are difficult to deal with.

Red’s strengths come from direct damage to the opponents life total that bypass the battlefield and dragons, more flying threats.

Colorless cards strengths come from the fact that they are able to be cast with any color mana and provide ramp/fixing.

Next we need to require certain things from our deck.  The main categories I’ll address in this guide are Threats, Removal, Draw, Healing and Fixing.  We need to win with threats, remove our opponents threats, draw into our threats/removal, heal where possible and fix/ramp so we can complete our objectives sooner than the opponent.

We want our threats to have as much of an impact on the board state as possible.  Our threats need to have high power/toughness ratios for the relative converted mana cost if it’s a creature, and, big game changing effects if they aren’t creatures.

Our opponents will be playing threats of their own and we need to not lose to them.  Removal is our primary way of dealing with our opponents threats.

Nothing is worse than “top deck” mode.  We need to include sufficient card draw in our deck, and, where possible, have that card draw stapled to other card types like threats/removal.  While Surveil and Scry are not card draw, they are card selection and for the purposes of classification, I have included Surveil and Scry as Draw but only Secondary, not Primary.

Both players start the game with 20 health.  Without healing, you are relegating all of the damage you take as essentially Infect damage.  Even something as small as “gain 2 life” can make the difference between winning at 1 life and losing the game.  Healing is very difficult to come by in the game and for the purposes of primary classification, I tried to included creatures with Lifelink as primarily healing.  For instance, Lyra Dawnbringer is both a Threat and Healing.  Because her healing is so great, in my opinion, I classified her as primarily a healing card, secondary a threat card.

We need to fix/ramp.  This is important.  We will be playing six and seven converted mana cost cards, some will require double or even triple of a certain color type.  Can’t play the cards if you don’t have the available mana to cast them.  Fixing can also provide access to a color without having that color available on a land.  Very big difference between “Tap:  Add G to mana pool” and “Tap:  Add one mana of any color to mana pool”.  The first is ramp, the second is fixing.  We will require as much fixing as possible without sacrificing our threat/removal ratios.

Another thing that I am not classifying in cards is their ability to spend unused mana each round, ie, mana dumps. Generally, the winner of each match is the one that was able to spend more mana than the opponent.  Cards like Dawn of Hope [1W – Enchantment – Whenever you gain life you may pay 2.  If you do, draw a card.  3W: Create a 1/1 white Soldier creature token with lifelink.] make a big difference over the course of a game.  Having access to a mana dump allows for a huge advantage over an opponent that doesn’t have access to a mana dump.  When you are building a deck with the cards in your collection, pay attention to cards that allow you to use untapped mana each round, especially mana dumps that allow you to use mana at the end of your opponents turn.  Guildmages are another great source for using unspent mana each round.

Below is the decklist that I used this past weekend in the AdamantMTG Prismatic Format event.  Each card is classified as either Threat, Removal, Draw, Healing or Fixing.  Some cards (like Lyra Dawnbringer) have a Primary and Secondary classification.  This is important as each card is fighting for a slot in the 250.  Each card needs to pull in as much work as possible.  Eviscerate is strictly a removal card.  Vraska’s Contempt is both a removal card AND a healing card.  This dual classification will bleed over into Deck Efficiency where a 250 card deck, essentially does the work of a 329 card deck but only requires 250 cards to do it.

What is deck efficiency?  It’s how much work a deck will output over a given series of games.  For instance, my deck has 54 cards that are primarily classified as a Threat, however, 79 cards result in Threats.  Example, Entrancing Melody.  Entrancing Melody [UUX - Sorcery – Gain Control of target creature with converted mana cost X.]  Entrancing Melody is primarily classified as a removal card, however, when the card resolves I have removed an opponents threat and gained a threat myself.  I take their Lyra, they are minus one Lyra (Removal) and I am plus one Lyra (Threat).  Let’s take another example, Reclamation Sage.   The purpose of Reclamation Sage is not a three converted mana cost 2/1 creature.  The purpose of Reclamation Sage is to remove my opponents problematic  artifacts and enchantments.  When Reclamation Sage enters the battlefield, if I destroy their Simic Locket, I have removed one of their cards (Removal) and gained a Threat, a 2/1 body.  It’s cards that perform more than one function that help lead to deck efficiency.  7% of the cards in my deck are in there for solely drawing cards, however, 21% of my deck draw one or more cards.  Hydroid Krasis is a high impact card, he is technically a Threat, Healing and Draw all in one card.  Due to the rarity of healing, I have him classified primarily as a healing card, card draw secondary.  I view the Threat side of him as a freebie.

Don’t get greedy.  The first thing I do when I help people in my playgroup out with their deckbuilding is analyze their land count.  Having a low land count leads to increased mulligans and “mana screws”.  Personally, I shoot for between 40 and 45% mana when building a non-aggro deck.  I want the ability to cast my cards and not missing land drops is critical to that end.  Having a higher land count also helps with your mana dumps and gives you the ability to pump out an extra token with Dawn of Hope.  Having excess lands also help with X spells like Banefire and Electrodominance.

Thank you for reading this article and choosing to participate in this fun, new and exciting way to play the game we all love!  If you have any questions or comments, feel free to email me at alifromcairo01@gmail.com. 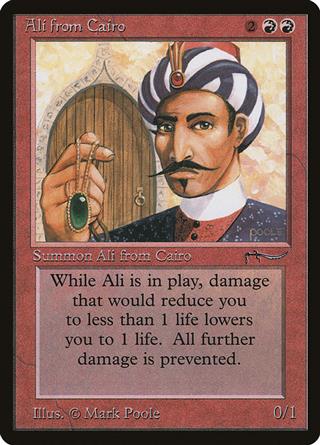