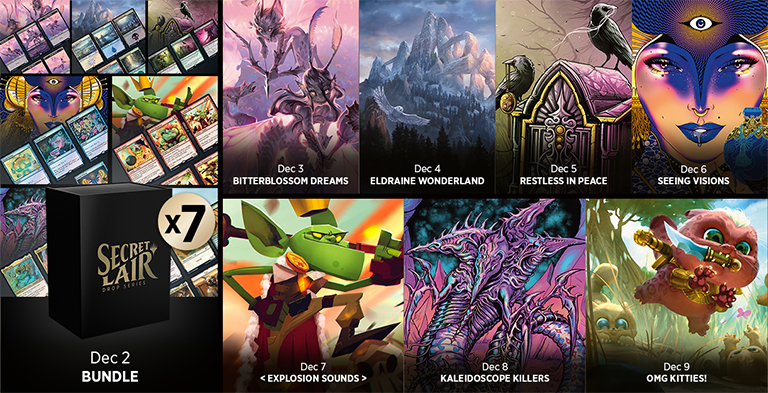 After releasing a teaser video of someone digging in a field, there was much speculation about what the new Secret Lair product from Wizards could be. On Tuesday (November 25th) this was revealed! For those who have not seen the news yet, the Secret Lair is basically a collection of alternative art reprints all centered around a unique theme. For example, one drop is a cute cats theme, another is a Bitterblossom plus tokens theme etc etc. You can check out all of the drops here.

Each "drop," will be between 3-7 cards that will be available for purchase over a span of 24 hours. Wizards is doing this straight advent calendar style, with a new drop every day between December 3-9. If you miss out on one you are completely out of luck, unless you are able to find them on the secondary market later. Regardless of what you think about the concept, it is hard to deny the unique card styles are pretty sweet. Each drop is a different aesthetic, so if you aren't a fan of one of the styles you will likely enjoy another one of them. From the official release post Wizards describs the drop as:  "Secret Lair is a Magic: The Gathering brand unlike anything in the history of the game. It's a love letter for Magic fans, with eye-popping designs and never-before-seen art styles".

This sounds great, however issues initially rose from some in the Magic Community because of the price of these drops, ranging from $30-$40. Some pundits are upset that Wizards is calling this product a "love letter for Magic Fans" and turning around and selling 5 lands for $30. Additionally, you only get 1 copy of each card per drop you order, so if you want a full playeset of these cards it will run you from $120-$160. That much money for some cosmetics certainly seems like a blatant way to cash in on fan loyalty, however when you dive into it I think that some of these could actually be a really good deal.

First of all, these Secret Lair drops do seem like a really unique holiday gift for a loved one or friend who is into magic. $30-$40 isn't too bad of a price to spend on someone, and with the uniqueness of these drops it is likely a gift they will enjoy. Aside from that however, there are some other external factors that might make these worth it, with the obvious example being Bitterblossom

.  The card trades on the secondary market for around $30-$40 anyways, so if you wanted to purchase some copies you actually are getting a GOOD value with the Secret Lair price of $30 because of the inclusion of the unique tokens. Now obviously a lot of the cards in the set are not as valuable as Bitterblossom, however the unique art styles and inherent rarity of this deal should make the cards significantly more valuable than their normal counterparts. Additionally, the new formats Pioneer and Historic have really increased the demand for older cards recently. Wizards have said that these unique styles will be legal in formats where the specific card is legal, which means that it is possible to see some of these unique styles come up premier tournaments. Imagine a hypothetical scenario in the future where new cards are printed that would make a card like Leonin Warleader a playable in a popular competitive deck. If a player uses the unique art version of the card and makes a good run in said tournament with it, the card immediately becomes a classic collectors item. 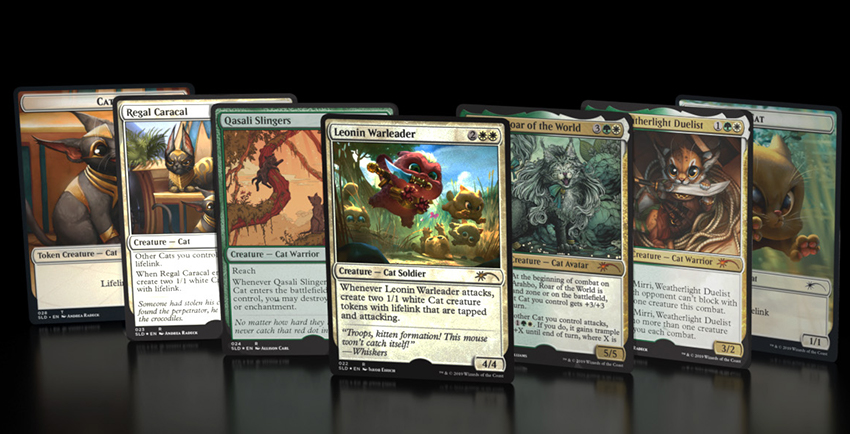 Since the cute cat version will only be available for 24 hours, this rarity will skyrocket the price of the card in such an example. All of a sudden, the $40 you spent on that drop wouldn't be looking too bad.

On a bigger picture however, I think Secret Lair hints at a future of deeper cosmetic customization. The gameplay of magic is not really affected at all by the art of the card, and Arena has already opened the pandora's box of microtransactions for cosmetics. Currently, most of the alternate art you can purchase is just a borderless version of the card, similarly to what you can get in the mastery tree or in other events. For example, they are charging 600 gems for this borderless Outlaws Merriment right now.

This is obviously subjective but there is no chance I would pay $4ish for that. However, imagine a world where completely different art styles like these Secret Lair themes were available for purchase. One way I see this potentially playing out is in the MPL. Although I do not really expect Wizards to go this route, one of the goals of the MPL is to project the personalities and personas of top players to the rest of the Magic community. The theory is if MPL players become bigger stars, it will attract a rooting interest in their performance thus attracting more viewers to tournament broadcasts and MPL splits. Well one very interesting way to express your personality is through card art. If each MPL player commisionned their own artists, each player would have their own unique in-game aesthetic. This would be really sweet perk of making the MPL in addition to the salary and the other features, and a really cool way for players to express themselves. Additionally, this could be another revenue source for MPL players, if it was possible for to buy the art styles they use in the Arena store. One way this could play out would be through Mythic Championships. The winner of a World Championship gets their face on a card, so it would not be totally unprecedented for the winner of a Mythic Championship to be able to commission their own card art.

To look at a recent example, Embercleave

kind of became a fan favorite card during Mythic Championship V due to Javier Dominguez's victory using Gruul Aggro in a tournament 50% dominated by Field of the Dead. If he could sell a really sweet alternative art version of that card and it was available for purchase on the Arena store a couple days after, he would have made an absolute killing. Of course Wizards would take a percentage, but Javier would still do very well for himself.

Although the exact scenario I laid out above may not come to fruition, I think the Secret Lair is definetly foreshadowing to more cosmetics for sale in some way shape or form. Wizards has seen how much money games like Fortnight has made from selling skins, and once you dip your hands into that pot it is hard to get them out. Plus, these Secret Lair drops will probably do very well, despite the lamest teaser video of all time, which will be even more tantalizing for them. Lets just hope Wizards retains these earnings properly, to either raise prize money or actually hire more developers!