/ Articles / Just How Improbable Was Javier Dominguez's Run to the Championship?

Just How Improbable Was Javier Dominguez's Run to the Championship?

Javier Dominguez Pilots Gruul to Win Yet Another Tournament!

They say luck is what happens when preparation meets opportunity, and this quote was absolutely true for Javier this last weekend. If you missed it, Javier Dominguez proves yet again he is possibly the best player in the game right now, following up on his World Championship victory with one of the most improbable tournament victories you will ever see. 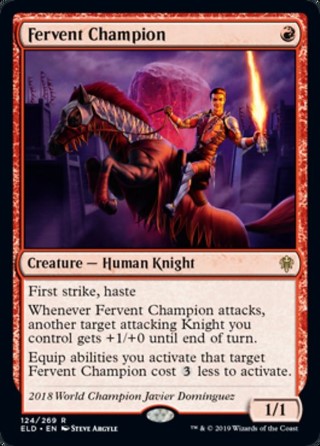 After day one of the tournament, If you had told me that Javier would end up winning it all I would have told you to go back to sleep and keep dreaming. This is nothing against Javier, but he squeaked by with a 4-3 record to advance to round 2 on tiebreakers. Meanwhile, the other Gruul decks posted a combined record of 3-12, with two 0-4's. Not only that, but the rest of the aggro decks in general all did pretty bad, as the Simic/Bant food matchup was an absolute nightmare for them. You simply do not see a deck with that day 1 record advance to win the grand salami in Magic very often, and Javier admitted he didnt love his deck choice before the tournament started, so he could not have been feeling incredibly confident.

In day 2, Dominguez barely scraped by yet again, entering the final day as the eight seed and only player with a 4-3 record in the top 8. After getting off to a 1-1 start, Javier rattled off three wins in a row, the first two going against mono-red and Ken Yukuhiro's Dino Knights deck. He also beat Golos decks twice that day, some foreshadowing for later down the road. Noticeably however, the decks he lost to were the simic/bant food decks, which had been absolutely crushing the aggressive strategies all week long. Therefore, Javier must have felt dismayed when he looked at the pairings and noticed he was up against Stanislav Cifka in round one, who in my opinion is the best player in the world right now, and who was presenting Javier's worst matchup.

To give an illustration of just how dominate the Bant/Simic decks were against Gruul, going into the match vs Cifka, Gruul Aggro, Rakdos and Golgari Adventures were a stunning 0-14 against the archetype! (Credit: @SaffronOlive). In a game with so much variance like Magic, its got to be nearly impossible to get totally shut out like that. Javier must have realized that, but he looked the odds straight in the eye and still took down Cifka. This was an absolutely gigantic win for Javier, but a quick look at the bracket showed he wasnt out of the woods just yet. In round two, he was guaranteed to play the winner of the Simic food mirror. There was no way he could beat a Bant/Simic deck twice in a row could he???

Well Spoiler alert... he did. What an absolutely incredible two game stretch for Javier. Piloting a deck that was 0-14 against a certain archetype heading into the day and beating them BACK TO BACK. An incredible feat for Javier, and what a way to prove you deserve to be the Mythic Champion.

In the final round, he went up against his best matchup in Bant Golos, which in itself was not supposed to make it to the championship based on its matchups, and despite a valiant effort by Jean-Emmanuel Depraz, easily took the second game to get the trophy and the $100,000.

Javier was the fan favorite all day, playing a deck that everybody was cheering for, and it was great to see him topple the odds and come out on top. Some recognition also has to go to his testing partner Andrea Mangucci who came in 3rd place, and the pair will be seeing a nice payday this morning!

Check out the Mythic Rare Podcast this Thursday where we will be breaking down the results in more detail, and going over the B&R announcement!